From our archives: Chasing eclipses in the 19th and 20th century

Popular Science on eclipses in Sumatra, Spain, and Hawaii. 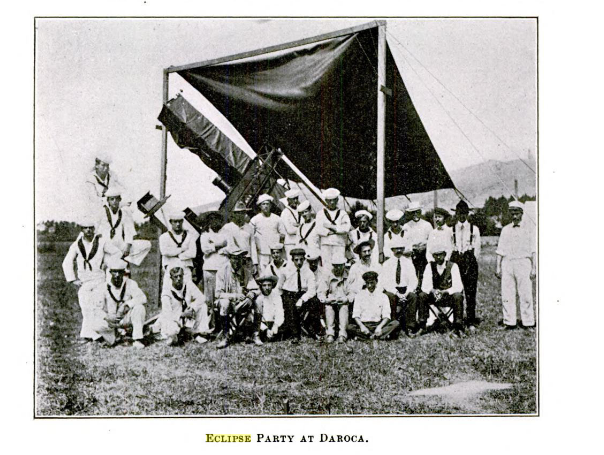 American researchers and sailors on the eclipse expedition to Spain. Popular Science
SHARE

Here at Popular Science, we’re really looking forward to August’s solar eclipse. But that’s nothing new. We’ve been writing about solar eclipses since our very first issue way back in 1872. Here’s some of our past coverage from when the sun didn’t shine.

As you explore the past through our archives, please note that not all of our coverage over the past 145 years uses language that would be considered appropriate today.

This early editor’s letter—then called the Editor’s Table—focused on preparations for “The Coming Eclipse” in April of 1875. The letter noted the ability of scientific exploration to transcend national and political boundaries, with astronomers from all over the world gathering in Siam—now Thailand—at the express invitation of the King, who promised to treat them as honored guests of the royal family. Researchers during that time were particularly interested in learning more about the sun’s corona which could be more easily studied during an eclipse.

A lot of people will drive or fly out to see the eclipse in August, but observing an eclipse in 1901 required a lot more work. A description of an eclipse expedition to Sumatra published in Popular Science in 1905 reads like a modern travel diary, with descriptions of local fashion and asides about accommodations, food, and visits to spice warehouses filling the pages between (comparatively sparse) descriptions of the eclipse itself. On this expedition, researchers were looking for evidence of planets between Mercury and the Sun. Unsurprisingly, they didn’t find one. A more scientifically-minded account had already been published in 1904.

In 1905, three naval ships took an American expedition to Spain to view an eclipse, where astronomers set up an entire camp complete with a telegraph to make detailed observations. The author, noted astronomer Samuel Alfred Mitchell, describes the expedition in detail, including asides about the number of rounds of ammo used in diplomatic salutes in Gibraltar (152), bullfighting, and how friendly the Spaniards were—even as the American delegation mangled their language. Mitchell saved his most poetic language for the eclipse itself, writing of the corona: “What a magnificent sight it is shining out with its pale pearly light for a couple of diameters round the edge of the sun, with its streamers and brushes of delicate light!”

By June of 1918, researchers had learned more about the Sun’s corona. But there was still a lot to learn about eclipses. During this eclipse, which also cut across a large swath of the United States, researchers hoped to observe flickering shadows that had been reported but not captured on film. They also hoped to use the eclipse to demonstrate the “new theory of relativity, which is exciting so much discussion in scientific circles”. An eclipse in 1919 eventually helped Einstein demonstrate his new theory, by observing the gravitational lensing of starlight around the obscured sun, but researchers were still using solar eclipse observations to bolster the theory in 1929 (see lead image above).

By 1919, researchers were observing just how much time and effort it took to mount an eclipse expedition, and wondering if there might be a better way. That year, an article noted two attempts to remove the vagaries of weather from the equation by simply flying above the clouds. One astronomer planned to mount a camera to his seaplane, while another planned to send up instruments in a balloon. At the time, Popular Science was team balloon, worried that vibrations on the plane would make too difficult to get clear images. By 1925 astronomers were regularly using planes to make observations, and take airborne pictures of the eclipse.

In 1926, astronomers looked forward to the next eclipse as a chance to measure the light of the corona and as an opportunity to measure the distance between the Earth and the Sun with precision. “If we could establish this distance, then man could measure all celestial distances,” Popular Science anticipated.

By 1991, we’d learned more about the Sun’s corona, shown that there wasn’t a little planet hanging out between Mercury and the Sun, and helped Einstein demonstrate his theory of relativity. But when a total eclipse crossed Hawaii that year, astronomers still had plenty to observe. In this case, some researchers took the opportunity to look for a donut-shaped ring of interplanetary dust around the sun.

For more future-facing PopSci eclipse coverage, keep checking in as the 2017 event approaches.