A Scientific Look At Why You Hate Hawaiian Shirts

Structuralist analysis reveals why you think soft, floral patterns are so tacky. (Ugh, so tacky.) 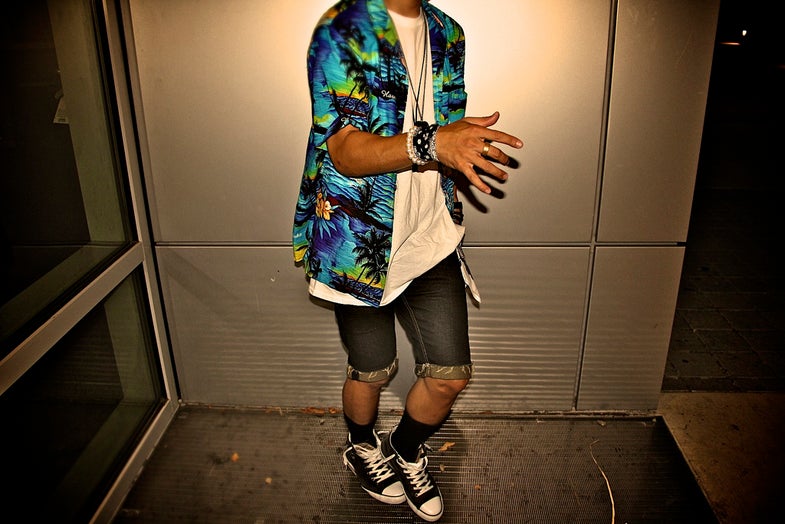 A penguin arrives at work with other penguins, except the arriving penguin is wearing a Hawaiian shirt. “You’re kidding,” he says. “I thought it was Friday.”

A priest in a Hawaiian shirt is delivering a sermon: “And on the seventh day…” he begins. The caption reads “Casual Sunday.”

These, and so, so many more pieces of cultural ephemera, appear in the scientific paper “Funny Kine Clothes: The Hawaiian Shirt As Popular Culture,” published in the Journal for Interdisciplinary and Cross-Cultural Studies, a document I would invite you to read every word of ASAP. Its two authors, University of Hawaii at Manoa’s Marcia Morgado and Andrew Reilly, pored over decades’ worth of cartoons, stock photos, and articles, then applied Chomskyan analysis to the body of research.

“We read descriptions of the shirt as recorded in social and economic histories, news reports, and journal and magazine articles; in advice columns and other texts concerned with dress and appearance standards; and on websites advertising Hawaiians shirts for sale. We examined hundreds of visual images in books about the shirt, in commercial photographs available on-line from Getty Images and Google Images, and in cartoons on Hawaiian shirts published in The New Yorker magazine. We considered descriptive terminology, physical characteristics of wearers, other aspects of the contexts in which the shirts signified, and rhetorical and visual techniques on which meanings relied. We extrapolated from the texts, photographs and cartoon images to propose terminology that captured the essence of the shirt as depicted in these works.” All toward answering a fundamental question: _How did the Hawaiian shirt become the most reviled, and simultaneously revered, piece of clothing in modern memory? _

The answer is… well, it’s complicated. The authors, interpreting the mess of documents in front of them–and there is a stunning amount of scholarly research on various cultural aspects of Hawaiian shirts, if you want to fall down a Google Scholar pit today–clustered feelings on the shirts into three groups: them versus us (tourists wear the shirts, and are ridiculed for it), different versus same (they’re a symbol of casual living and working, breaking conformity), and culture versus commerce (the shirt is romanticized as a symbol of true Hawaiian culture). All of which leads to this table, gorgeously, improbably titled “Table 1. Paradigmatic Structure of Iconic Meanings Attributed to the Hawaiian Shirt”: 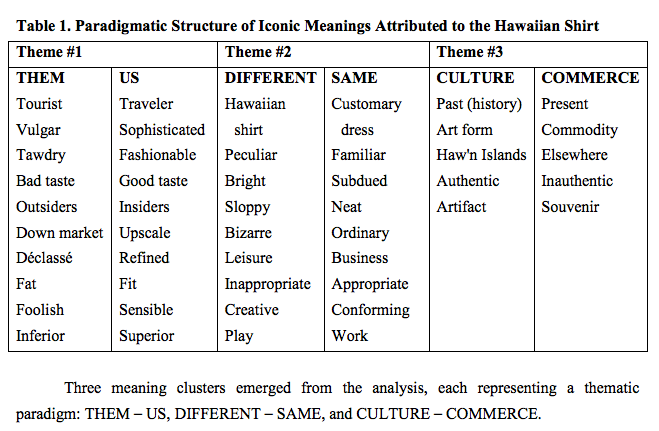 Why the strong feelings? We only have theories; but they’re decent theories, at least. The shirt really was a work of Hawaiian industries making bank selling to mainland customers and tourists visting the islands. Meanwhile, “[a]mong the resident population there was little interest in the shirt other than as a boost to the tourist trade. Furthermore, the shirt was banned for employees of City, State and Federal offices and from banks and corporate offices on grounds that its appearance would induce sloppy work habits.” By the 1950s, during a tourism boom, the shirt continued its association with tourists, along with all of the “characteristics typically attributed to the tourist, such as being fat, badly dressed, and unattractive became associated with the shirt.”

Later, a “petition to the State Legislature generated by the local garment industry (along with a gift of two Hawaiian shirts to each legislator) ultimately resulted in a Legislative resolution that promoted Hawaiian shirts as appropriate business wear on the last day of the workweek.” On the Islands, that became “Aloha Friday”; elsewhere, it was “Casual Friday.” Pop culture, from the _New Yorker _cartoons above to the stock photos on Getty Images, reflected that idea well into today, turning the Hawaiian shirt archetype into a punchline–repeated over and over. (Another _New Yorker _cartoon: a man opens the door and sees the Grim Reaper, clad in floral. The man says, “You call this death with dignity?”)

You can read the whole article here, if you’re curious.