The First Supermoon Eclipse In 32 Years Happens This Sunday

It's not a sign of the apocalypse (we hope) 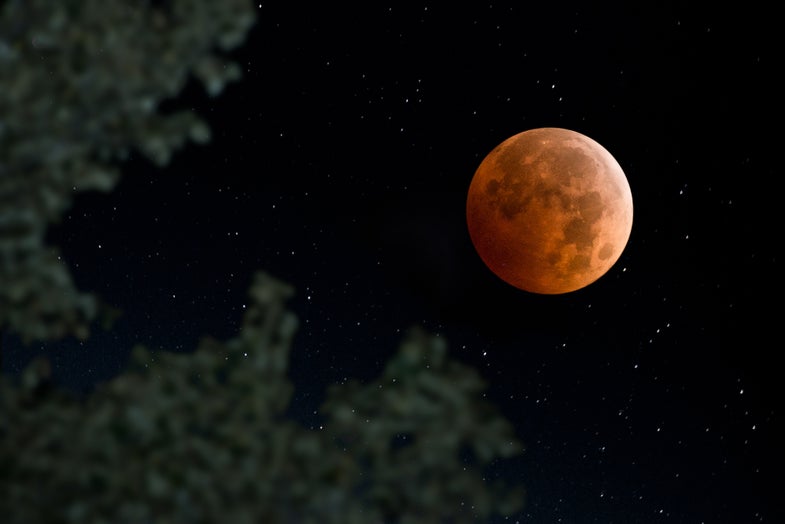 As you gaze toward the sky on Sunday night, the cooling fall air around you, perhaps a few leaves crunching beneath your feet, and—WAIT the moon is giant and red! Don’t worry, it’s not a sign of the end times. You’re witnessing a rare and exciting event.

On the evening of September 27, sky spectators in North America, South America, the Atlantic Ocean, Greenland, Europe, Africa, and the Middle East will be able to see the moon at its closest point to Earth (known as its perigee).

The moon reaches its perigee (and the apogee, which is its furthest point from Earth) about once a month. However, it does not always reach that point when it’s full. This week, we’re in luck. The full moon will appear about 14 percent larger in diameter than usual, and is thus called a super moon, or “Supermoon”. At the same time, the Earth will pass between the sun and the moon, creating a total lunar eclipse. It’s the fourth full lunar eclipse in a row (a.k.a. a tetrad), with no partial eclipses in between. Shadow will start falling on the moon at 8:11 p.m. EDT, the full eclipse will begin at 10:11 p.m. EDT, and it will peak at 10:47 p.m. EDT, according to NASA.

To make it even more exciting (or scary, depending on how you look at it), the moon will also appear red in what’s known as a “Blood Moon,” hence the moniker and hashtag #SuperBloodMoon, which NASA is using on social media to promote the occurrence, and which you can use to find people’s images of the rare event (note: not all may be authentic). For those of us outside the area where the Supermoon will be visible, and/or in urban centers where the lights on the ground may interfere with the sight above, NASA is also providing a helpful livestream of the sky from Griffith Observatory, California, beginning at 8 p.m. EDT.

Amateur astronomy site Shadow and Substance also has some helpful charts showing exactly where and when the “SuperBloodMoon” will be visible across the Earth.

According to a fun investigation by EarthSky.org, the menacing “Blood Moon” moniker comes from biblical prophecy. It also pretty accurately describes the color of the moon during the eclipse. The moon looks red during a total lunar eclipse mostly because of the Earth’s atmosphere. When the Earth passes directly between the sun and the moon, our home planet casts its shadow over the moon. If the Earth had no atmosphere, the moon would be dark, and basically invisible to the non-existent humans who would definitely not survive without the atmosphere.

The last time a supermoon eclipse took place was 1982, and if you miss this one, there won’t be another until 2033. NASA has a nice detailed set of videos to show when the magic happens in different time zones, so be sure to find your area and get your eyes on the sky.

Updated after publication to include an embed of NASA’s livestream, a link to Shadow and Substance, and additional details about the timing of the eclipse.