We finally know what happened to (most of) Mars’ missing atmosphere

The answer was blowing in the solar wind. 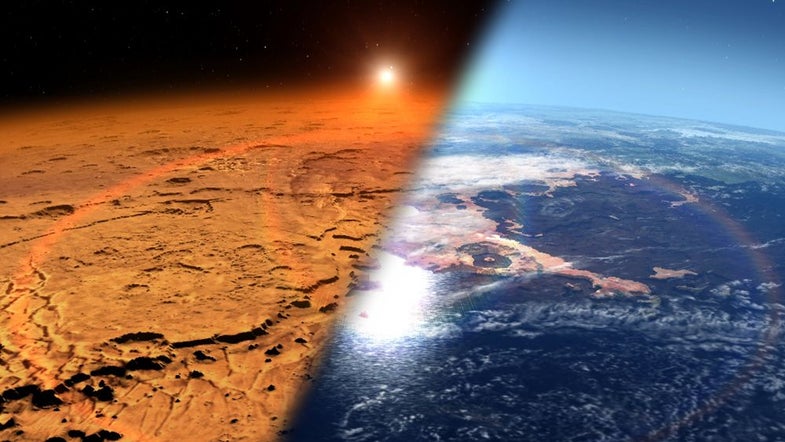 Humans want to bring life to Mars, but in order to do that we need to figure out a way for life to survive there. Read our article on how to terraform Mars by warming it with super-greenhouse gases. NASA's Goddard Space Flight Center
SHARE

About four billion years ago, Mars was warm. Water flowed in lakes and rivers under a nice thick blanket of atmosphere. But then something cataclysmic happened. Mars’ insulating atmosphere all but disappeared. Exposed to the harsh elements of space, the red planet became the dry, frozen wasteland that it is today.

Until now, this missing atmosphere had baffled scientists; was it lost in space, or did the Martian crust reabsorb it? New data from NASA’s Mars Atmosphere and Volatile EvolutioN (MAVEN) mission is settling the debate. Bruce Jakowski and others on the MAVEN team have calculated that most of Mars’ atmosphere blew away in the solar winds.

Scientists have known that even today Mars continues to lose some of its atmosphere to space, but these new findings are the first to put a number on how important this process has been over the course of the planet’s history.

“Our conclusion is that most of Mars’ atmosphere has been lost to space, rather than getting locked up on the planet,” says Jakowski. “It’s a major, if not the major cause, of atmospheric loss.”

MAVEN’s measurements of the noble gas argon were key to solving this mystery.

He and his team knew that the solar wind preferentially grabs and removes lighter molecules, because lighter molecules are more likely to float up high into the atmosphere where the solar wind strikes. By comparing the concentrations of argon-36 and argon-38 (atoms with 36 and 38 neutrons) at different heights in the atmosphere, the researchers were able to discern how much of the lighter argon-36 had been stripped away over time.

Then they used that information to model the solar wind’s effects on other types of molecules in Mars’ atmosphere. They concluded that around 66 percent of Mars’ atmosphere has escaped into space over the past four billion years or so.

Next, the MAVEN team hopes to take a closer look at how the other isotopes in the Martian atmosphere have changed over time. Carbon is of particular interest because of carbon dioxide’s insulating properties, as well as oxygen and hydrogen, which form other essential ingredients for life as we know it. Jakowski said the team chose to study argon first because it was the easiest one.

“Carbon is very complicated because so many things can affect it,” says Jakowski. Its concentration in the Martian atmosphere depends on the season, since it freezes into ice at the polar caps during the winter, and sublimates into a vapor in warmer months. It also reacts chemically to form a variety of molecules. “Argon is much simpler because once you put it in atmosphere, it’s non-reactive, it just sits there.”

Jakowski says that the mystery of Mars’ disappearing atmosphere is only mostly solved for now. Although the bulk of it is lost in space, crustal absorption and other processes may have still played minor roles in the atmosphere’s disappearance.

Unfortunately, the findings could make things difficult for folks (cough cough Elon Musk) who’ve suggested we make Mars warmer and more Earth-like by releasing a thick layer of CO2 and other greenhouse gases.

Terraforming Mars would be a lot easier if the carbon had just settled into the polar ice caps and Martian rocks, waiting patiently to be released by humans. But as it looks now, most of Mars’ carbon is gone for good. What remains isn’t enough to form a thick enough layer of atmosphere for humans to be comfortable, according to Jakowski.

“If the CO2 has been lost to space, then it’s no longer on the planet to mobilize and put back in the atmosphere,” says Jakowski. “What we’re saying is, using ingredients found on Mars, it’s not possible to terraform Mars.”

But don’t despair yet, Elon Musk. We can always bring our own carbon. Goodness knows, we’ve got enough of it here on Earth.