When you watch the eclipse, keep an eye out for diamonds in the sky

It’s from a ray of sunshine peeking through a lunar valley. 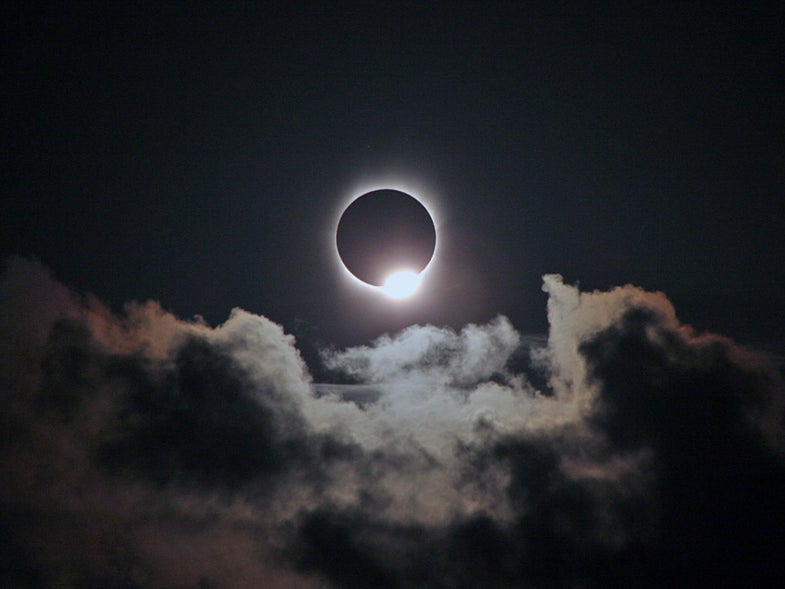 The Moon isn’t just some big round rock: it has mountains and valleys. And during a total solar eclipse, you can actually see the sunlight cutting a path through that lunar terrain.

As you may already know, a broad swath of the United States will turn into a giant total solar eclipse party on August 21. If you’re planning on joining in the merriment, look out for Baily’s Beads and the diamond ring effect—the last rays of sunshine before and after totality, when it all goes black.

Baily’s beads look like a string of blinding gems around the edge of the moon. The last surviving bead, set atop a ring made of the sun’s corona, forms the so-called diamond. The light show will last for less than a minute, so you’re going to want to keep your eyes on the (disappearing) ball.

Of course, the whole eclipse will be a “dramatic and truly awesome experience,” says Rick Fienberg of the American Astronomical Society. But “all the real action is in the last minutes before the moon completely covers the sun, and in the first minutes when it begins to uncover the sun.”

Baily’s beads and the diamond ring both happen because the lunar mountains are the first part of the moon to completely slide across the sun’s face. So as the moon moves between us and the sun, the mountaintops will break the sliver of blazing sunshine into a string of dazzling beads. And as the moon continues to move, you’re eventually left with one last bead, the diamond. It’ll look as if it’s set on top of the inner solar corona, the sun’s white-hot crown of plasma.

And the experience is different from year to year—it all depends on the terrain at the moon’s leading edge. Is it covered with stand-alone peaks, or a mountain range? Are the mountains steep or gently-sloped? These factors can determine how sharp and distinct the beads look.

Francis Baily, an English astronomer, first popularized the notion during the annular eclipse of 1836. Annular eclipses, unlike total eclipses, take place when the moon is further from the Earth, and therefore unable to completely block the sun. But in this 1836 eclipse, something unusual happened.

As usual, “the moon never completely covered the sun,” says Fienberg, but this time, “the matching size happened to be so close that he saw these beads of light almost all the way around. So it was quite remarkable. Instead of being this arc of sunlight, it was this ring of beads that looked like a necklace!”

Baily himself explained his experience to the Royal Astronomical Society as follows:

Now, you might be wondering how best to capture all this on camera.

Fienberg suggests watching for Baily’s beads before the moon covers the sun, and the diamond ring after, when the moon is uncovering the sun.

“That makes it easier to deal with your solar filters. It’s also safer because there’s no risk that you’ll take your filters off too soon,” says Fienberg. In addition to being a generally good eye-safety tip, keeping your filters on until totality means that there’s no risk of being dazzled by the sun and missing what happens next.

When the sun is completely gone, “whip your filters off and you’ll be blown away by seeing the solar corona around the jet-black disc of the Moon and the beautiful deep twilight-blue sky,” says Fienberg. “Your jaw will drop.”

But don’t forget to put the filters back on as soon as you see the diamond ring returning.