Getting too much suns 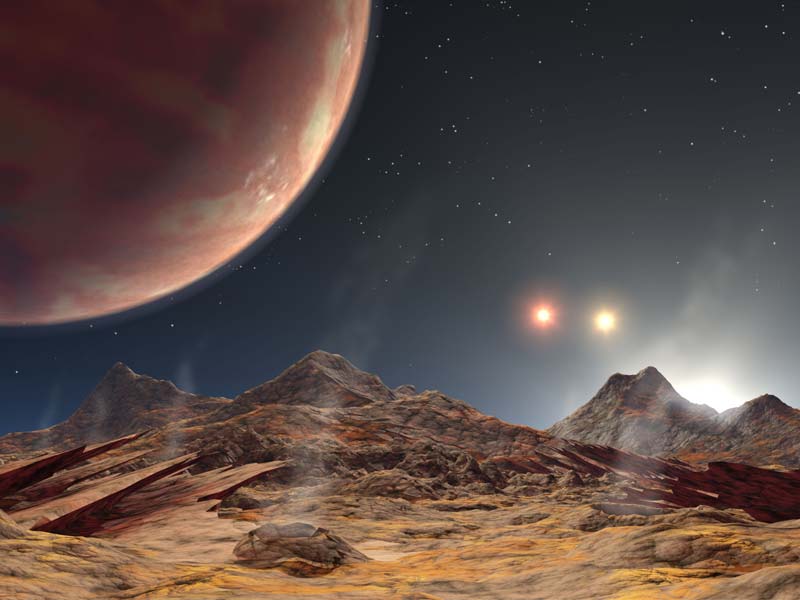 The view from a moon of a planet orbiting three suns. The first sun is just peeking above the horizon. This artist’s interpretation depicts exoplanet HD 188753 Ab, the first planet found in a three-star system.

The planet KELT-4Ab orbits not one, not two, but three stars. That’s a whole lot of sunshine. The planet’s discovery is announced in a study published in The Astronomical Journal.

It’s a rare find. Only four planets have been found in three-star systems since the first one, HD 188753 Ab (pictured above) was found back in 2005.

Planets orbiting triple suns are particularly fascinating, in part because humans love a good sunset. SO MUCH. While planets around some of these triple systems don’t disappoint, others do. Take HD 188753 Ab, for example. Sunsets on a moon of that planet are thought to look something like this:

Pretty, right? But what about on KELT-4Ab? On that planet, Gizmodo reports that the primary star would look 40 times larger than our own Sun, and the planet would orbit its primary star once every three days, whipping around so fast that one side of the planet is constantly day, and one side is constantly night.

The other two stars would mostly be doing their own thing, orbiting the larger, primary star along with the planet, switching places in the sky every 30 years or so, and shining down on KELT-4Ab with light no brighter than a full moon.

It might be something that we need to see to believe, but even though it is a relatively short distance away (210 parsecs or 684 light years–never go on a road trip with an astronomer), this strange new world is not at the top of any human exploration list. In addition to being uncomfortably close to at least one of its suns, it is also described formally as ‘An Inflated Hot Jupiter,’ which sounds beyond unappealing. We’ll study those sunsets from a distance.