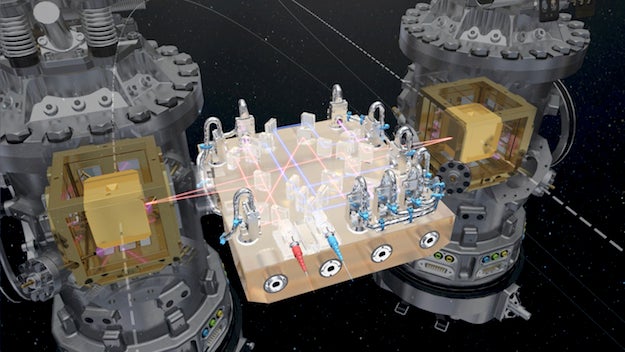 Earlier this year it was officially announced that researchers had detected gravity waves with the Laser Interferometer Gravitational-Wave Observatory (LIGO), a pair of observatories located in the United States. Today, just a few months later, researchers announced a key step in building the next generation of gravitational wave observatories, in space.

In a paper published today in Physical Review Letters, researchers announced that the free fall experiment on the LISA Pathfinder spacecraft was a success.

The Pathfinder mission is a spacecraft that carries two identical ‘test masses’, small blocks made of a gold-platinum alloy that are situated exactly 38 cm apart. The recent experiment showed that it was possible for these two blocks to be in a constant state of free fall inside the spacecraft. Launched by the European Space Agency in December of last year, it is currently located 1.5 million miles away from Earth, and has only been operating since March. It is a test mission, designed to show that a larger project, the currently mothballed Laser Interferometer Space Antenna (LISA) is possible.

“Not only do we see the test masses as almost motionless, but we have identified, with unprecedented precision, most of the remaining tiny forces disturbing them,” Stefano Vitale, Principal Investigator of the LISA Technology Package, said.

By ruling out the other small forces acting on the cubes, that means that in a larger mission, like the LISA mission, researchers could place similar test masses in spacecrafts at different points in space, and by comparing the tiny motions of the cubes, they could detect gravity waves from things like distant black holes or other galaxies.

“At the precision reached by LISA Pathfinder, a full-scale gravitational wave observatory in space would be able to detect fluctuations caused by the mergers of supermassive black holes in galaxies anywhere in the Universe,” Karsten Danzmann, Co-Principal Investigator of the LISA Technology Package, said.

Writing on a Reddit AMA this afternoon, Martin Hewitson, a senior scientist with the LISA Pathfinder project said that the eventual construction of LISA could lead to all kinds of astrophysical observations.