A Galaxy Extremely Far, Far Away

Hubble spots the most distant galaxy yet 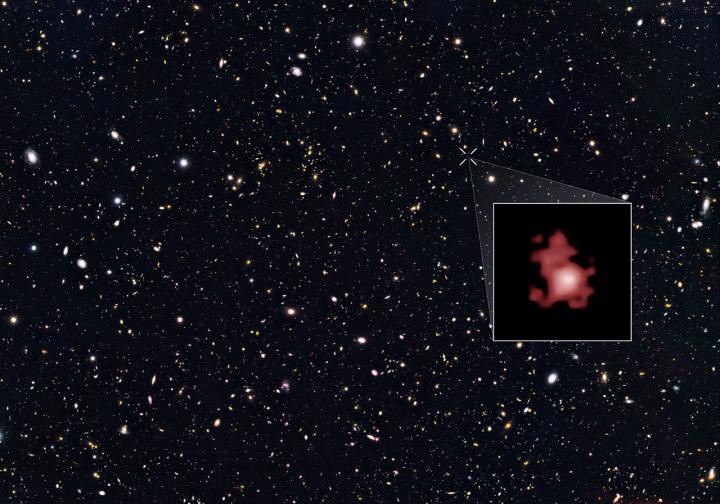 Astronomers located a galaxy 13.4 billion light years away, making it the oldest and most distant galaxy found yet. NASA, ESA, AND P. OESCH (YALE UNIVERSITY)
SHARE

A long time ago, a galaxy far, far away sprang into existence. Billions of years later, light from that galaxy hit a mirror in a solar-powered satellite orbiting the third planet of a medium-sized star, and the scientific community of the ruling species of that planet got really excited. And they all lived happily ever after.

In a paper published in Astrophysical Journal researchers announced that they had observed a galaxy 150 million years older than the previous record holder.

“We’ve taken a major step back in time, beyond what we’d ever expected to be able to do with Hubble. We managed to look back in time to measure the distance to a galaxy when the Universe was only three percent of its current age,” said the lead author of the paper, Pascal Oesch.

For those who don’t know the age of the universe off the top of their heads, that means that the galaxy formed just 400 million years after the Big Bang, when the universe was still really young. But its ancient ancient age isn’t the only thing that has the researchers so excited. It’s also surprisingly bright and well-populated with stars, producing roughly 24 new stars a year, a rate 20 times faster than our own galaxy, the Milky Way (we still beat it in terms of overall size–our galaxy is 25 times larger.)

“It’s amazing that a galaxy so massive existed only 200 million to 300 million years after the very first stars started to form. It takes really fast growth, producing stars at a huge rate, to have formed a galaxy that is a billion solar masses so soon,” co-author Garth Illingworth said.

Though this is an amazing achievement, the astrophysical community hopes that the record will soom be broken again, once the long-anticipated James Webb Space Telescope launches in October of 2018.