New Map Shows The Oldest Light In Our Universe

Also, the universe's age has now been measured at 13.8 billion years old. 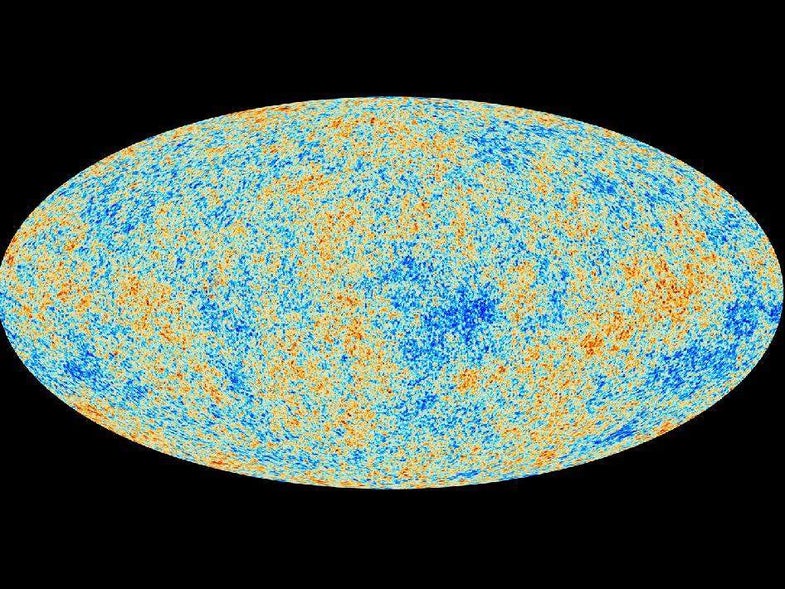 This map shows the oldest light in our universe, as detected with the greatest precision yet by the Planck mission. The ancient light, called the cosmic microwave background, was imprinted on the sky when the universe was 370,000 years old. It shows tiny temperature fluctuations that correspond to regions of slightly different densities, representing the seeds of all future structure: the stars and galaxies of today. ESA/Planck Collaboration
SHARE

Blinding when it originated, eons before any eyes would have set upon it, the afterglow of the Big Bang now surrounds us, filling the universe with a cold, faint glimmer. Tiny fluctuations in the temperature of this background radiation are a glimpse into our universal origins. They reveal the seeds of what would eventually grow into the universe as we know it today. A new map of this ancient light, unveiled today, redistributes the ingredients of our cosmos, which will rewrite countless cosmological equations.

The universe is 100 million years older than scientists had thought, originating 13.8 billion years ago. It also has a little more dark matter, a bit less dark energy and a tad more normal matter than originally thought, according to the new results. Here’s the tally: 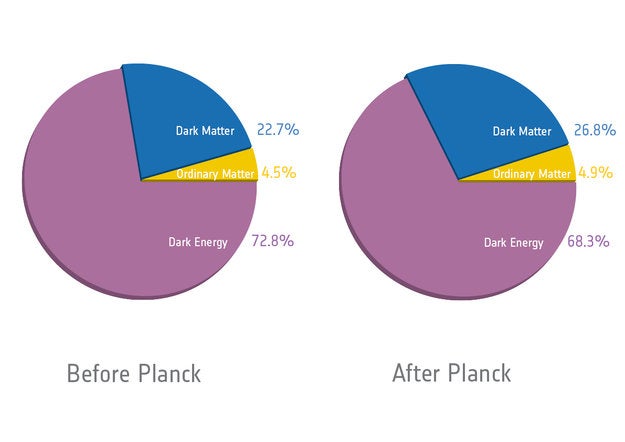 Composition of the Universe

These numbers result from the first all-sky observations from the Planck space telescope, which is staring at the radiation. It is known as the cosmic microwave background. The microwave background is remarkably consistent across the entire sky, except for some tiny splotches. These are the echoes of sound waves, triggered by quantum fluctuations in matter in the nanoseconds after the universe was born. These fluctuations, which show up as patches of color in Planck’s map, are the seeds of all the galaxies, stars and planets we have today.

“The variations tell us new things about what happened just 10 nano-nano-nano-nanoseconds after the Big Bang, when, in a gazillion times less time than it takes me to say this, the universe expanded by 100 trillion trillion times,” explained Charles Lawrence, U.S. Planck project scientist at NASA’s Jet Propulsion Laboratory. “That tells us about everything in the universe.”

Planck scientists also translated the telescope’s findings into frequencies that we can hear. This tone represents primordial sound waves that traveled through the early universe, and were later “heard” by Planck.

“Just 10 nano-nano-nano-nanoseconds after the Big Bang, in a gazillion times less time than it takes me to say this, the universe expanded by 100 trillion trillion times.”Like its predecessors, Planck has observed some weird aspects of these cosmic sound splotches. Cosmological theories hold that the sky is the same everywhere, assuming the universe expanded out in all directions with equal speed and force. But the light patterns are not symmetrical, meaning the universe is not, in fact, the same temperature everywhere. And there’s a big cold spot in the middle, faintly resembling a big Atlantic Ocean between continents, that is bigger than expected. Why? Scientists don’t know yet, and they may need some new physics to explain it.

“Our ultimate goal would be to construct a new model that predicts the anomalies and links them together. But these are early days; so far, we don’t know whether this is possible and what type of new physics might be needed,” George Efstathiou of the University of Cambridge, a Planck team member, said in a statement. “And that’s exciting.”

Earlier CMB measurements noticed some hints of this asymmetry, but it was largely ignored for a variety of reasons, noted Krzysztof Gorski, a Planck scientist at JPL.

“This feature is now proven real by Planck, and the shadows of doubt on that are fading,” he said. “Perhaps we could say that our universe has thrown us a curveball, and it rarely fails to surprise us.”

Along with refining the makeup of our universe, the Planck data tests some theories describing cosmic inflation, that dramatic expansion Lawrence mentioned. The new map suggests random processes were at play on quantum scales, which is interesting because it allows cosmologists to rule out some really complex inflation theories involving a “rigged” or organized universe. The early universe was considerably less rigged than several inflation theories would suggest, Planck showed. This was difficult to figure out without Planck’s super-sensitivity. 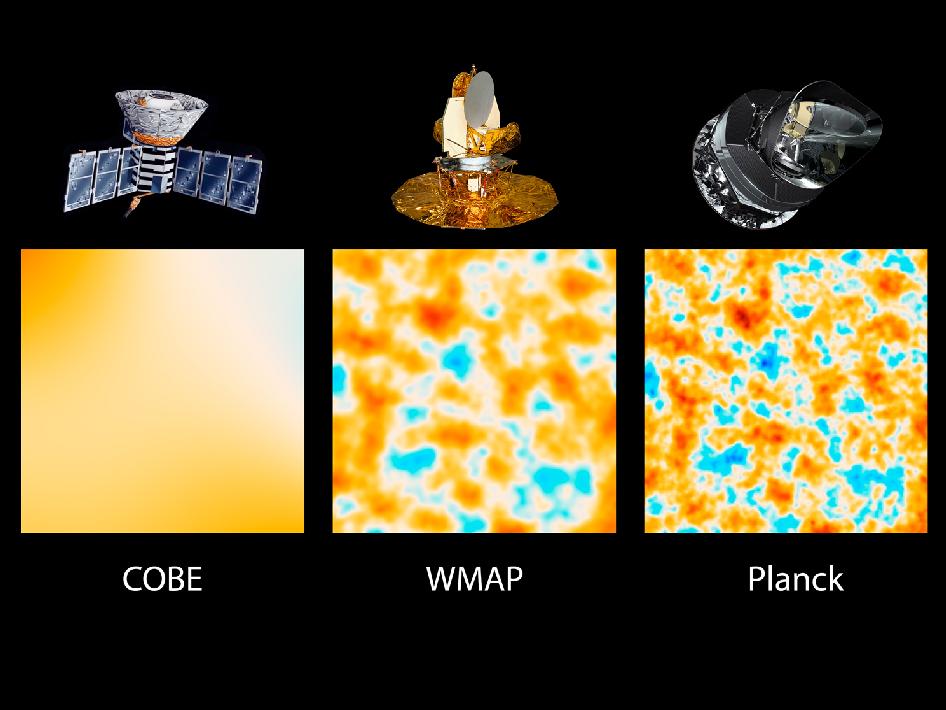 This graphic illustrates the evolution of satellites designed to measure ancient light leftover from the Big Bang that created our universe 13.8 billion years ago. NASA’s Cosmic Background Explorer, or COBE, launched in 1989, demonstrated that quantum fluctuations in this ancient light reveal some detail about the universe’s past. These variations, called anistotropies, came into sharper focus with the Wilkinson Microwave Anisotropy Probe, or WMAP (middle panel). Launched in 2001, WMAP found strong evidence for inflation, the very early epoch in our universe when it expanded dramatically in size. Planck is the most advanced satellite yet of this type. Launched in 2009, it images the sky with more than 2.5 times greater resolution than WMAP, creating the sharpest all-sky map ever made of the universe’s cosmic microwave background.

Planck is a space telescope launched in 2009 and named for German physicist Max Planck, who came up with quantum theory. It is a successor to the famed Wilkinson Microwave Anisotropy Probe, or WMAP, which created the first-ever map of the cosmic microwave background a few years ago. Planck is much more sensitive, scientists said.

“It’s as if we’ve gone from a standard television to a high-definition television. New and important details have become crystal-clear,” said Paul Hertz, director of astrophysics for NASA, which is a partner in the European Space Agency Planck project.

Complete results from Planck, which still is scanning the skies, will be released next year. 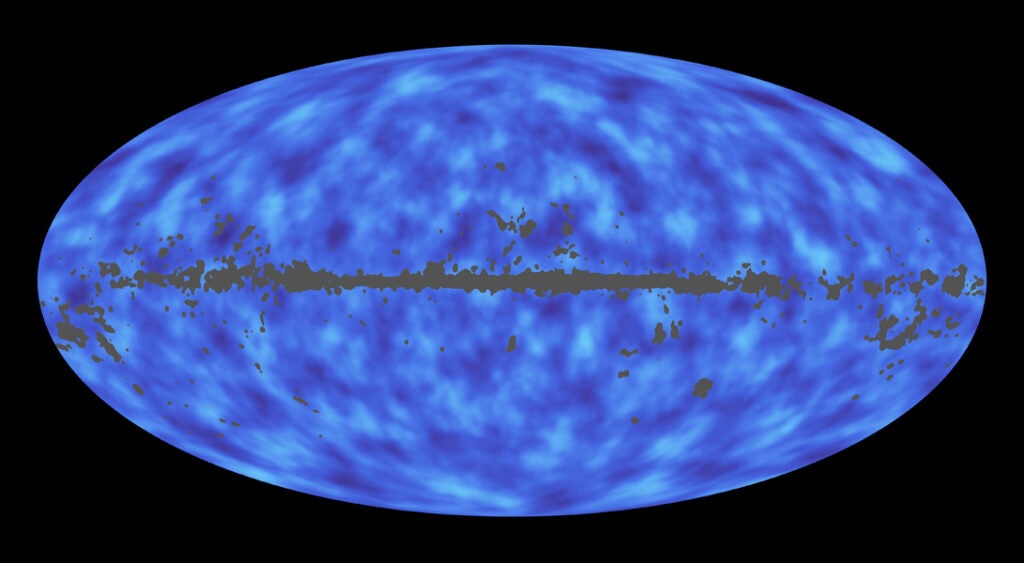 All Of The Matter

This full-sky map from the Planck mission shows matter between Earth and the edge of the observable universe. Regions with less mass show up as lighter areas, while regions with more mass are darker.
Deep Space
Space
big bang
cosmic microwave background
cosmology