Mysterious Radio Bursts Are Indeed Coming From A Galaxy Far, Far Away

New research clears the reputation of these distant signals 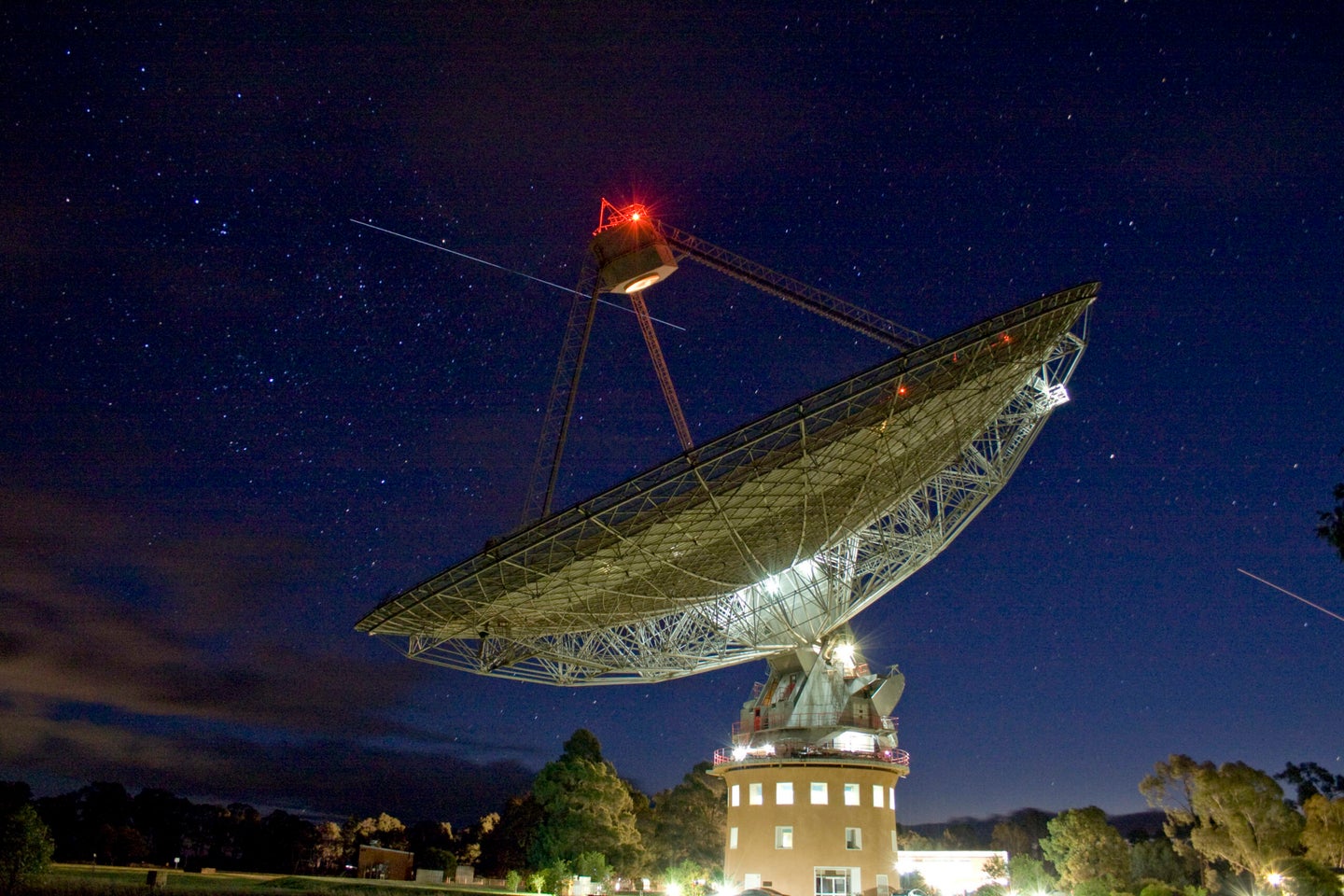 In 2001, the Parkes Radio Telescope picked up an extremely energetic burst of radio waves that lasted a mere five-thousandths of a second. Since then, astronomers have found several more so-called fast radio bursts, or FRBs, and even observed one of these pulses in real time last May. Based on these observations, the FRBs seem to be coming from more than 3 billion light years away, far beyond the Milky Way.

The origin of fast radio bursts is still unknown: They might come from an incredibly heavy, incredibly fast-spinning magnetar throwing off flares, or from a massive collision between dense neutron stars—or from something else entirely. “You need something that happens on a very short time scale and can produce a ton of energy,” says Emily Petroff, a graduate student at Swinburne University of Technology in Australia. Other researchers have speculated that FRBs are the products of human–or alien–technology, and some doubted that the bursts came from outside the galaxy at all.

But now, the debate surrounding FRBs’ origins may be put to rest at last. Researchers have determined the source of a signal remarkably similar to FRBs, clearing the reputation of these bursts and where they come from.

What makes researchers think fast radio bursts are coming from outside the galaxy? An FRB signal is “spread out” in time, meaning the waves that make up an FRB don’t arrive at a radio telescope all at once. This spreading effect can happen when a signal passes between stars. While traveling through the interstellar medium, the signal’s waves slow down depending on their frequency. By the time the signal reaches a radio telescope, the high-frequency waves have pulled ahead of the low-frequency ones, and thus arrive sooner, stretching out the signal. Fast radio bursts are very stretched out, indicating they come from a galaxy far, far away.

Other researchers, however, point out that the spread effect could have a different cause. Another spread-out signal that radio telescopes have picked up is the peryton. But these bursts definitely don’t come from other galaxies, or even other planets. Instead of coming from a single point in the sky, a peryton signal looks like it’s coming from all over, a sure sign that its source is very local. Some blame perytons on atmospheric lightning, radio interference, or even telescope glitches. Unfortunately, perytons look pretty similar to FRBs, so they throw doubt on the idea that the bursts are coming from far away. Some astronomers even think FRBs are just another form of perytons, a false signal rather than an extragalactic one.

But perytons’ reign of uncertainty is at an end, thanks to three perytons that popped up at the Parkes Radio Telescope in one week this past January. Petroff and other astronomers at Parkes took a look at the telescope’s recently installed radio interference monitor, to see what radio activity was going on nearby around the time of the perytons’ appearances. The monitor, which gathers a wider range of frequencies than the telescope does, picked up strong emissions at a frequency around 2.5 gigahertz every time the radio telescope had seen perytons. “That led us to thinking, ‘What emits at 2.5 gigahertz?'” says Petroff. “And the obvious thing was microwaves.”

The next step was to see whether the scientists could use microwaves to make a peryton appear. They ran the machines at different settings and for varying amounts of time, but the radio telescope didn’t pick up any new perytons. Then they tried opening the door while the microwave was active. When you pull open the door of a running microwave, its engine, called a magnetron, releases the energy that was bouncing around inside the oven. The discharge sweeps across a range of frequencies as the engine shuts down, creating a stretched-out frequency spread and interfering with the radio telescope’s observations. This was the source of the mysterious peryton signal.

Since microwaves are the culprit behind perytons, Petroff and other authors argue in their new paper, their findings strongly suggest that fast radio bursts are indeed coming from space. FRB signals look different from perytons, and they appear even when the telescope is pointed away from peryton-producing microwaves. Timing is another dead giveaway: FRBs appear at all times of day, whether or not humans are on site nuking coffee and making Cup Noodles. Perytons, on the other hand, only occur during business hours. “They all peak right around lunchtime,” says Petroff. “So that should have been a red flag.”