Found: The Furthest Galaxy From Earth

A long time ago, this galaxy formed far, far away 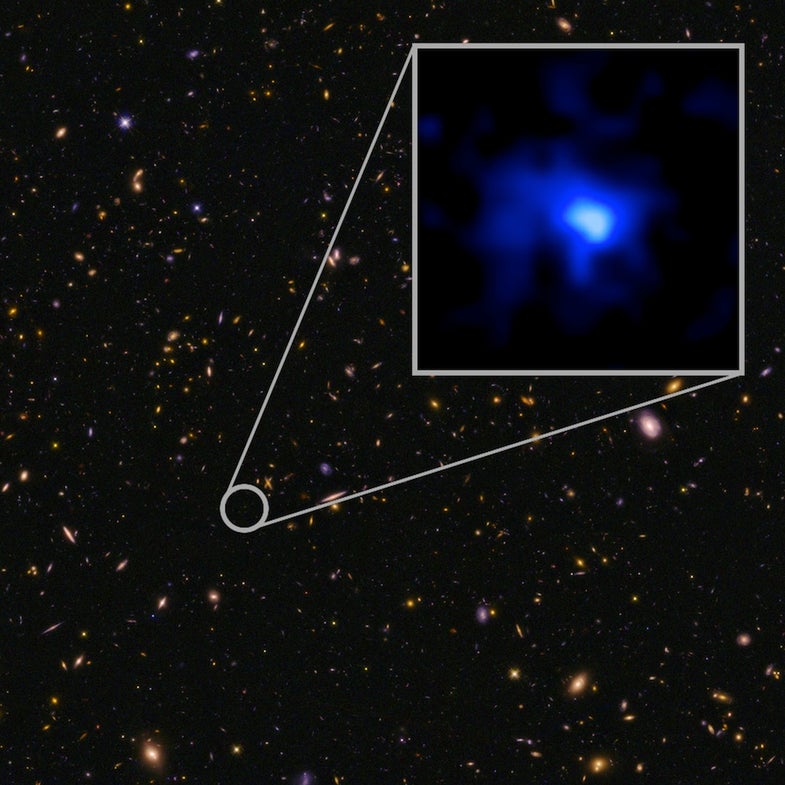 EGS-zs8-1 was identified originally by images taken with the Hubble and Spitzer space telescopes, but this most recent research pinpointed the galaxy’s exact location using the W. M. Keck Observatory in Hawaii. Keck’s new MOSFIRE (Multi-Object Spectrograph for Infrared Exploration) instrument allows researchers to study the light shifts from several galaxies at one time, giving a clearer indication of just how far the galaxies sit.

The light shifts of EGS-zs8-1 indicate that it’s barely younger than the Big Bang, which is thought to have occurred 13.8 billion years ago. If the measurements from Keck are correct, then this galaxy formed just 670 million years after that cataclysmic birth. In the timescale of the universe, our dimension was in its infancy.

Since the light from this galaxy takes 13.1 billion years to travel to our puny eyes, we’re actually seeing back in time, to when this star cluster first formed. And at such a young age, EGS-zs8-1 was already a massive galaxy to behold. “While we saw the galaxy as it was 13 billion years ago, it had already built more than 15 percent of the mass of our own Milky Way today,” Pascal Oesch, lead author of the study, said in a statement. “But it had only 670 million years to do so. The universe was still very young then.”

Perhaps in EGS-zs8-1, on a remote desert planet orbiting two suns, a young padawan is contemplating his destiny.