Researchers Discover An Ancient Replica Of Our Solar System 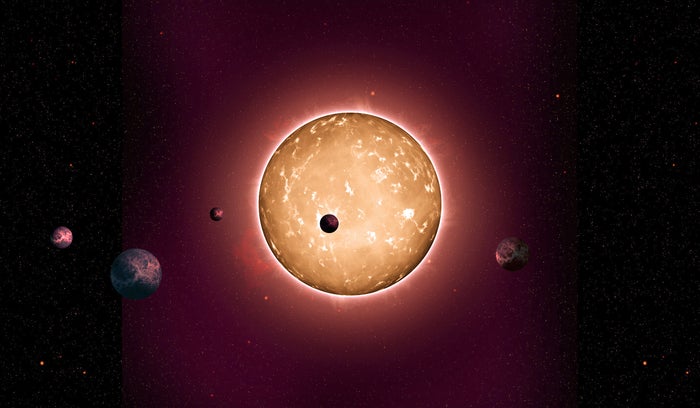 An artist rendering of Kepler-444 and its planets. Peter Devine and Tiago Campante, University of Birmingham (U.K)
SHARE

Deep within the bowels of our Milky Way Galaxy, there is another solar system that is like a miniature replica of our own. Except this planetary system is just a tad older — by about 7 billion years.

“It’s an old member of the galaxy, and its age made us very excited,” Sarbani Basu, a professor of astronomy at Yale and one of the researchers, tells Popular Science. “This planet system formed when the Milky Way was very, very young.” Basu and her team published their findings today in The Astrophysical Journal.

“This planet system formed when the Milky Way was very, very young.”

At the heart of the planetary system, Kepler-444 is a sun-like star, and the researchers claim it is about 75 percent of our sun’s size. Kepler-444 boasts five planets in its orbit, yet these planets are fairly small, with sizes between those of Mercury and Venus. They also orbit the star much more closely than our planets do: The combination of their orbits is equal to less than one-tenth of Earth’s distance from the Sun. Figuring out all of these details about Kepler-444 and its planets required four years worth of imaging and data from the Kepler spacecraft.

Kepler provided crucial seismic data about Kepler-444 over that four-year period. According to Basu, the extremely high temperatures of a star cause certain materials in its outer layers to heat up and boil, prompting the entire star to shake. These oscillations periodically change the brightness of the star by minuscule amounts. The researchers studied these intervals of dimming and brightening to figure out the size, age, and composition of Kepler-444 — a process known as asteroseismology.

“With these pulsation frequencies, we can determine how many times per second a star pulsates, and those pulsations are related to the structure of a star,” says Basu. “So we can work backwards and learn what the star looks like on the inside. And the structure of the star was only possible if the star is only so many years old.”

To determine the amount of planets orbiting Kepler-444, the researchers focused on the dimming of the star as the planets passed in front of it. A transiting planet dims the star much more significantly than its daily pulsations, and the researchers were able to measure these dips in light to learn more about Kepler-444’s planetary disc.

“If you have planets this old in habitable zones, there is the potential for really ancient life.”

Of the many things they gleaned about this particular solar system, the researchers were surprised to learn that the star had planets surrounding it at all. Because it was born when the Milky Way Galaxy was so young, the planetary system formed in an environment with very few elements, so the star itself is likely comprised of very few metals. Researchers have long theorized that metal-heavy environments are needed for planets to form around a star, so this finding opens up the potential for even more solar systems that were never thought possible.

With an increase in the number of potential planets in our galaxy, there comes an increase in chances that extraterrestrial life is lurking nearby. Plus, this research means there are many potential planets that are billions of years older than originally thought; that means they may have been harboring life for some time. “In this particular case, the planets are not in a habitable zone,” says Basu, “but if you have planets this old in habitable zones, there is the potential for really ancient life.” That’s pretty exciting, because the older these lifeforms are, the greater the possibility that they are intelligent. On Earth at least, it took quite a long time for simple lifeforms to evolve into intelligent beings.

So the Milky Way may be home to quite a few advanced civilizations. Or at least the odds of that happening just got better.