Strange signals were just spotted coming from a distant galaxy

But it's not aliens. 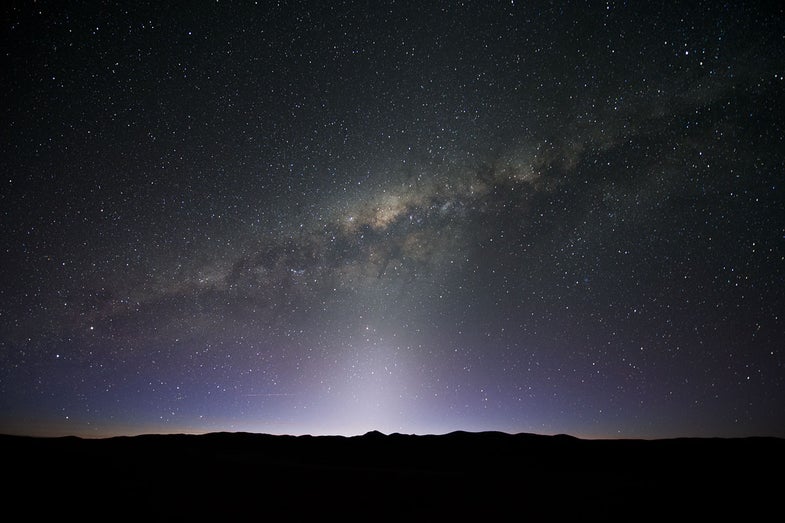 Long ago, 15 bright radio pulses emerged from a dwarf galaxy about 3 billion light years away from Earth. Last Saturday, a telescope in a remote area of West Virginia picked up those signals from a distant corner of the universe, and yesterday, a group of astronomers and astrophysicists shared preliminary results on their observations.

This is a newly active period from an unknown source that astronomers labelled FRB 121102. It’s a source of fast radio bursts (FRBs). We still don’t know much about FRBs. They were only first detected in 2001, and the first time we saw one—this one, in fact—repeat was in 2015. FRBs are exactly what they sound like: super fast, really powerful burst of radio signals. But we have no idea what causes them.

“The repeating FRB source is an anomaly in the population right now; it’s the only one of its kind,” says Emily Petroff, a post-doctoral researcher at the Netherlands Institute for Radio Astronomy. Petroff was not involved in the current observations, but was part of the project that put together the definitive catalogue of Fast Radio Bursts last year.

“We’re trying hard to find more (either by checking to see if other FRBs repeat, or trying to find more FRBs and monitor them),” Petroff wrote in an email. “Keep in mind that the population is still really small. Only 30 FRB sources have been found, from 29 of those we’ve only seen one burst, from one of them we’ve seen over 200!”

To have 15 bursts occur from the same source in a short period of time is exciting because it hasn’t been seen before, and these particular bursts are also coming in at a much higher frequency than normal, peaking at about seven gigahertz.

“Bursts from this source have never been seen at this high a frequency,” Andrew Siemion, astropysicist and director of the Breakthrough Listen program said in a statement.

A press release put out by the Breakthrough Listen organization, which funded and organized the project says; “Possible explanations for FRBs range from outbursts from rotating neutron stars with extremely strong magnetic fields, to more speculative ideas that they are directed energy sources used by extraterrestrial civilizations to power spacecraft.”

Wait…aliens? Really? Not so fast.

Bringing aliens into the conversation before eliminating every other possibility might seem surprising, but not if you consider the source of this new information. The Breakthrough Listen Initiative is a $100 million project with the express directive of looking for signals from extraterrestrial civilizations. So upon finding something strange and not immediately explainable, of course they’re going to bring up aliens. It’s their job to hold that up as a possibility until the evidence shows otherwise.

But there are plenty of other avenues of research that provide possible explanations for the repeating burst. Many of these are thrilling and exciting, and most of them are definitely not aliens.

“With any mystery signal from space comes the inevitable question about extraterrestrial life. At the moment there’s no evidence that these are encoded messages or anything like that,” Petroff says. “And when dealing with a new phenomenon, the simplest explanations—such as emission from an astrophysical source (and not a spaceship)—are usually the best place to start.”

PSA: Things can go bump (or burst!) in the cosmos and be compelling/fascinating/intriguing without being ALIENS!

It could be an object the size of a city but with the mass greater than the sun, the last spinning remnant of a star that went supernova. These neutron stars, which can fully rotate on their axis tens of thousands of times per minute, can sometimes fling bright pulses out into the universe, or have magnetic fields so powerful that they earn the name magnetars. Some scientists think that FRB’s could be emitted early on in a magnetar’s development.

“Most of the current theories for FRBs are centered around compact, energetic objects in other galaxies,” Petroff says. “The two most compact and energetic things we know about are black holes and neutron stars; they also happen to be two of the most extreme types of objects in the universe. Some theories are that these are giant pulses from a very young energetic neutron star, or that the FRB signals that don’t repeat could be produced when two neutron stars collide. At the moment there are more theories than there are FRB sources, though.”

Whatever the signal is, it started on its journey an extraordinarily long time ago. So even if we can’t convince you to get off the but-wait-this-could-be-aliens train, we’ve got some bad news.

Interesting to note – if it *IS* aliens: these signals took 3 billion years to reach us, and that life could be long gone by now.

This source of fast radio bursts was only discovered in November of 2012, and it was only shown to repeat in 2015. That’s not a whole lot of time to figure out what the baseline for these signals might be, which is one key reason that researchers can’t make a definitive call yet. Continuing to observe the star over time can help them get more data, and maybe even eventually figure out what it is.

“The last time we had a cosmic mystery source like this was with the reporting of the discovery of gamma ray bursts in the 1970s,” Petroff says. “Then it took decades to figure out some of the basic things like where they were coming from and what caused them. FRBs were discovered only 10 years ago, and we’ve already learned so much about them. And we’re finding more and more of them every year. Even just the past 12 months has been a complete whirlwind of activity and new results. Lots of new telescopes are coming online in the next 6 to 12 months that are going to find hundreds of FRBs per year, so it’s going to be an incredible time!”

So don’t be disappointed that we haven’t found aliens yet. Instead, get hyped about everything we’re learning about this wild, wonderful universe.