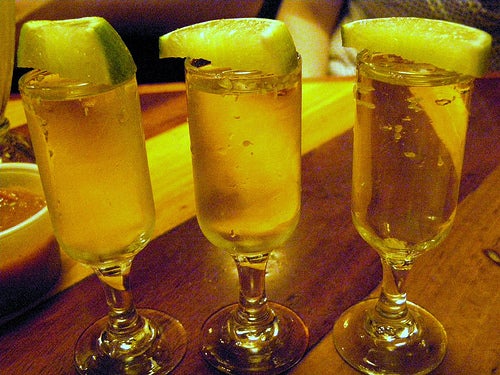 Tequila may be just another drink to those out in the town, but to a team of scientists in Mexico their country’s native alcohol turned out to be a gem; a diamond, to be precise. Javier Morales, Luis Apátiga and Victor Castaño at the National Autonomous University of Mexico made the alchemist-worthy discovery while experimenting turning various organic solutions, such as acetone and ethanol, into diamonds. The scientists noted that 80-proof tequila (40 percent alcohol) had the ideal proportion of ethanol to water to create diamond films. In order to make the diamonds, they evaporated the tequila into a vapor, and then heated the vapor above 1400 degrees Fahrenheit before depositing it on silicon or stainless steel trays. The resulting diamond films were between 100 to 400 nm in diameter and free of impurities.

Hard and heat resistant, the diamond films could have several commercial applications, such as for cutting tools and optical electronic devices. At the moment, the team is looking into creating diamonds with impurities for potential use as a new kind of semiconductor. The scientists have bigger plans in sight, too: They intend to turn their work into an industrial-scale venture by 2011 and hope to find a tequila distiller to provide them with the supplies.