Glance at the stars, glance back in time. 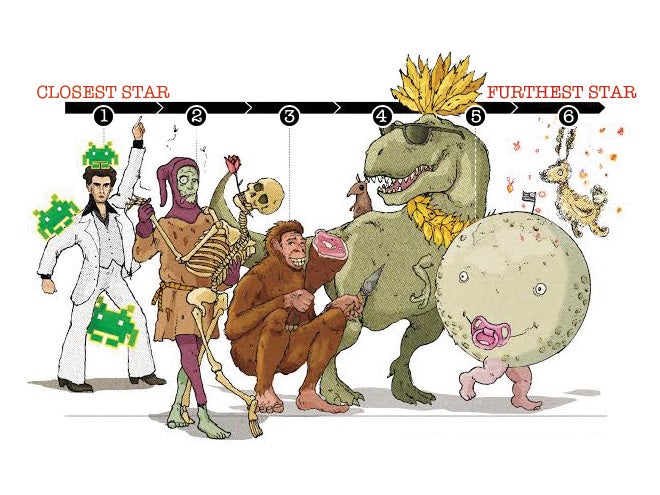 When we look at stars in the night sky, we’re actually looking back in time. Since it takes a while for light to cross the vast emptiness of the universe—even at a blistering 186,000 miles per second—we’re seeing each celestial object as it looked eons ago. But what if those stars looked back at our pale-blue dot? Here’s what the astral peeping Toms would see.

a star in the Orion constellation

WHAT’S GOING ON: Medieval Europe is still bringing out its dead from the worst years of the plague; smaller outbreaks continue to ravage the population. Britain and France play a bloody game of thrones in the Hundred Years’ War…because the Black Death wasn’t deadly enough.

WHAT’S GOING ON: Our ancient ancestors learn to wield tools. Homo habilis most likely butchers his meals with sharp stone flakes. He also sports humanlike feet, indicating that he walks on two legs, and has a bigger brain than his predecessors. He will employ both to create disco.

a supernova in galaxy NGC 4487

a galaxy cluster far, far away

WHAT’S GOING ON: A Mars-size rock slams into Earth (probably), creating the moon and nearly destroying our planet. Fortunately, since the first cellular sacs won’t crawl out of the proverbial mud for a billion more years, no life-forms are harmed in the making of this satellite.

the most distant galaxy we know of

WHAT’S GOING ON: Just a few million years after the Big Bang, Earth’s neighborhood consists mostly of emptiness. What little gas and dust there is won’t clump together into our sun and planet for another 9 billion years. Enjoy the peace and quiet while it lasts.