A Star System 12.9 Billion Light Years Away is the New Most Distant Galaxy

The telescopes get bigger and more sophisticated, the light we can see comes in from deeper in the cosmos, and... 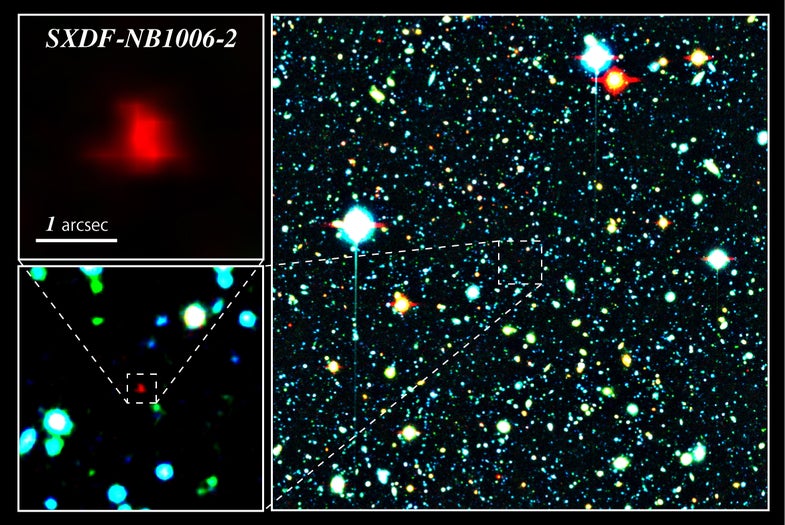 The telescopes get bigger and more sophisticated, the light we can see comes in from deeper in the cosmos, and the most-distant visible objects keep getting further away. Last October astronomers using Hubble Space Telescope data reported sighting a possible galaxy some 13.2 billion light years away. That sighting is still awaiting confirmation as a galaxy, and in the meantime it has some competition in a galaxy discovered by scientists at the Subaru and Keck Telescopes that has, for the time being, seized the title of most distant known galaxy.

At some 12.91 billion light-years out, galaxy SXDF-NB1006-2 could at some point be eclipsed by the Hubble finding. But for now it edges out galaxy GN-108036 for the title, a faraway star system also discovered by the Subaru telescope that is ever-so-slightly closer to Earth.

To capture the image of such a distant object, the telescopes had to gather light for 37 hours, allowing it to accumulate on the telescopic sensors. Astronomers then had to strip out two potential galaxies from nearly 59,000 other objects to zero in on their most distant galaxy candidate. Additional observations with spectroscopic instruments confirmed that SXDF-NB1006-2 is indeed the most distant galactic body on the books.

That puts its minimum age around 12.9 billion years, meaning it was around just 800 million years after the Big Bang birthed the universe as we know it into existence 13.7 billion years back. Astronomers search for these distant objects hoping to learn more about the universe’s earliest days.