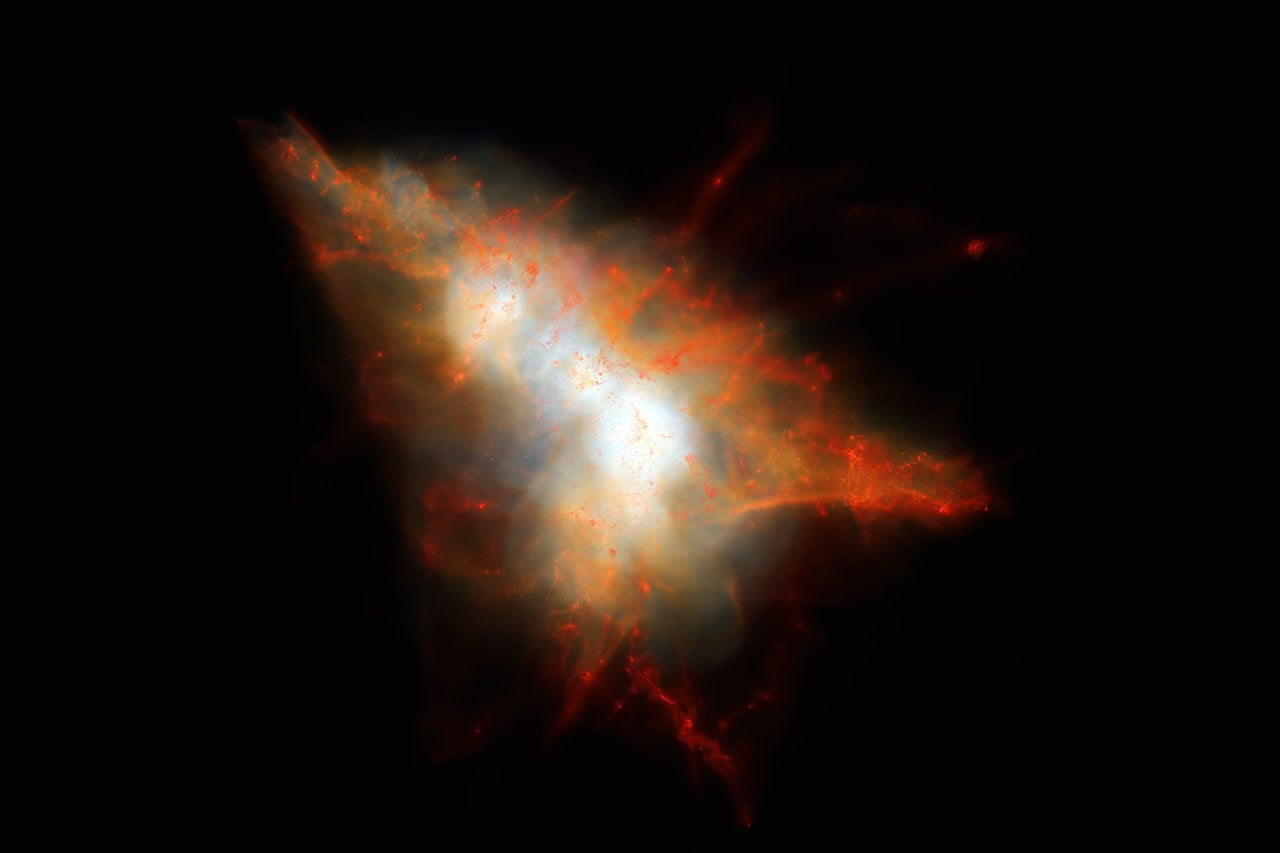 This rendering shows a snapshot from a cosmological simulation of a Lyman-alpha Blob similar to LAB-1. This simulation tracks the evolution of gas and dark matter using one of the latest models for galaxy formation running on the NASA Pleiades supercomputer. This view shows the distribution of gas within the dark matter halo, colour coded so that cold gas (mainly neutral hydrogen) appears red and hot gas appears white. Embedded at the centre of this system are two strongly star-forming galaxies, but these are surrounded by hot gas and many smaller satellite galaxies that appear as small red clumps of gas here. Lyman-alpha photons escape from the central galaxies and scatter off the cold gas associated with these satellites to give rise to an extended Lyman-alpha Blob.
SHARE

A long time ago, a few galaxies were forming far, far away in a giant blob.

No, really, a blob. The technical term for blobs like these is a Lyman-alpha Blob, considered by scientists to be one of the largest objects in the Universe. They emit Lyman-alpha light, a kind of ultraviolet radiation.

In a paper that will be published in the Astrophysical Journal, researchers found that one blob, Lyman-alpha Blob 1 (LAB-1) shines so brightly because of galaxies in the heart of the blob. When the 300,000 light-years-across blob was observed by the European Space Observatory last year, researchers noticed that the light from the blob was polarized, which meant that the light from the blobs that we were seeing on Earth was likely coming from light sources like galaxies within the blob, and not the blob itself glowing.

“Think of a streetlight on a foggy night — you see the diffuse glow because light is scattering off the tiny water droplets. A similar thing is happening here, except the streetlight is an intensely star-forming galaxy and the fog is a huge cloud of intergalactic gas. The galaxies are illuminating their surroundings.” Jim Geach, lead author of the new study, said.

LAB-1 is 11.5 billion light-years away from Earth, and is home to two galaxies that are forming stars at rates 100 times greater than that of our galaxy, the Milky Way, and several satellites.

“What’s exciting about these blobs is that we are getting a rare glimpse of what’s happening around these young, growing galaxies. For a long time the origin of the extended Lyman-alpha light has been controversial. But with the combination of new observations and cutting-edge simulations, we think we have solved a 15-year-old mystery: Lyman-alpha Blob-1 is the site of formation of a massive elliptical galaxy that will one day be the heart of a giant cluster. We are seeing a snapshot of the assembly of that galaxy 11.5 billion years ago.” Geach said. 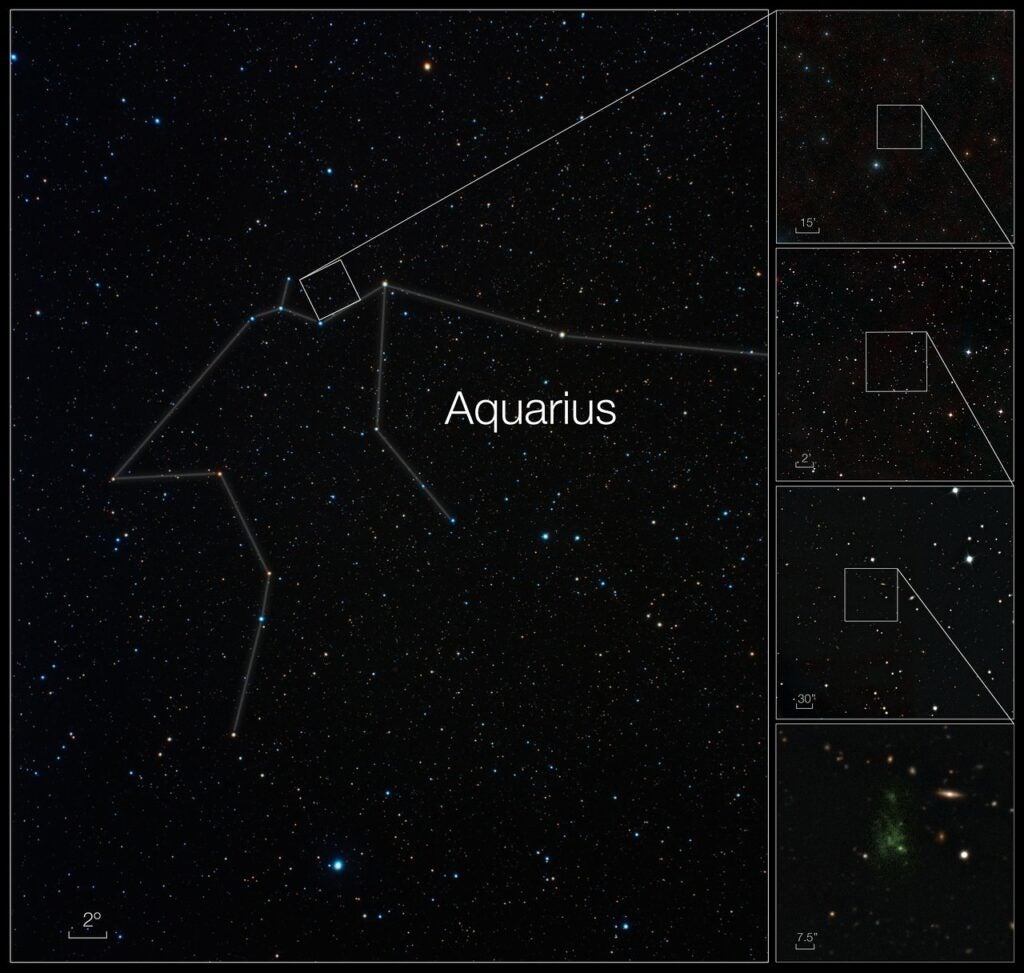 Where LAB-1 is located in the night sky. 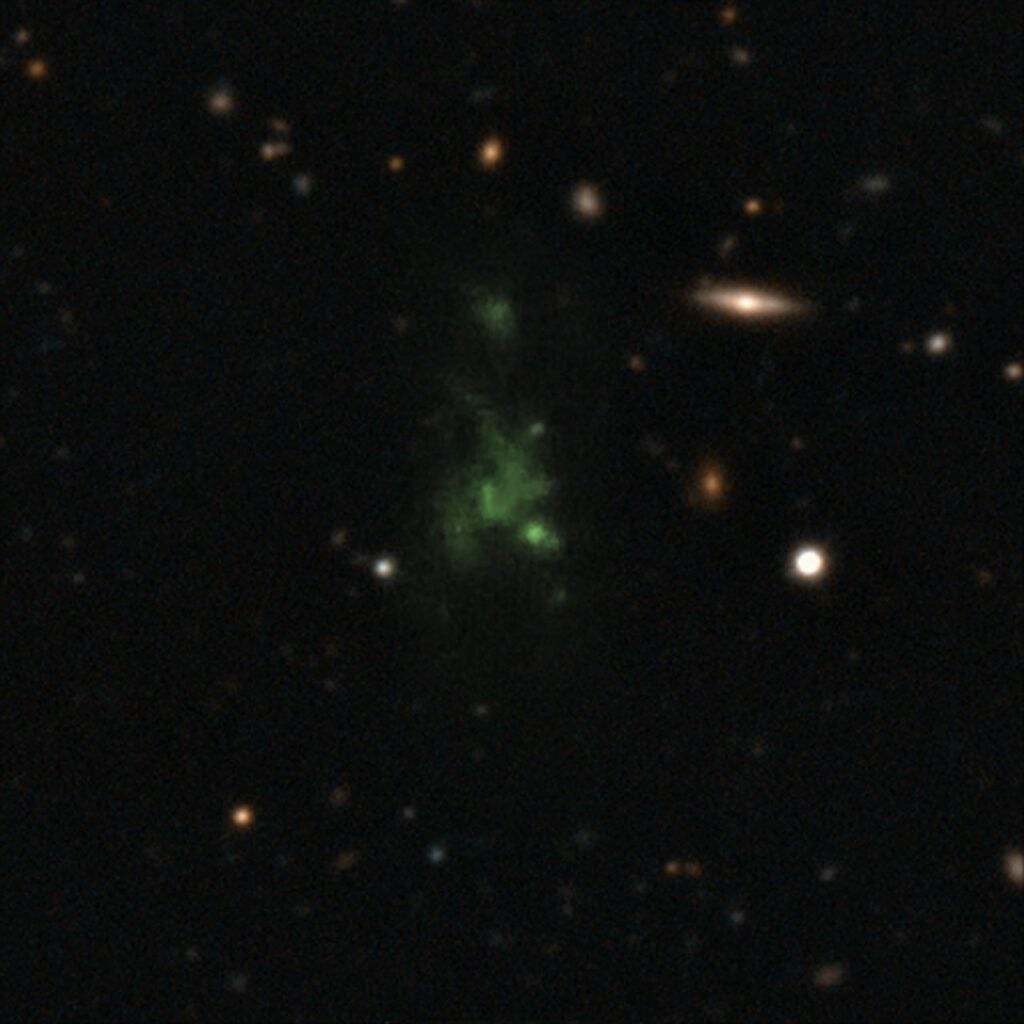 A Composite image showing what LAB-1 looks like. The greenish tint is due to the stretching of light by the expanding universe as it travelled away from the blob and towards Earth.
Space
galaxies