Bonding with a partner could have unexpected rewards—in your brain, that is

Cuddling rodents might be the key to understanding this social behavior. 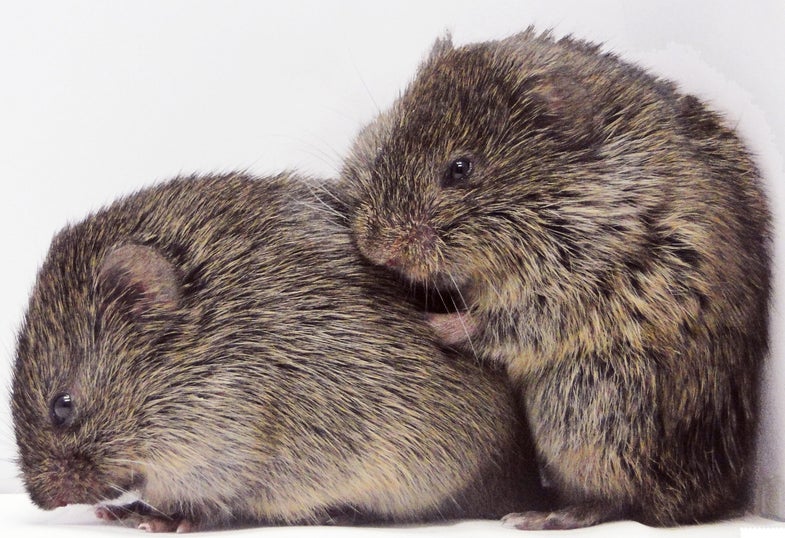 You might not expect it, but the prairie vole has something to teach you about relationships. A recent study of these rodents, published last week in Nature, helps unveil what happens when love (or at least something like it) is on the brain.

Researchers at Emory University found that pair bonding—the tendency to preferentially spend time with a particular partner—is related to the connectivity of certain brain reward pathways. The study, carried out on female prairie voles, showed that voles with stronger connections between two particular brain regions were more likely to bond monogamously—and when scientists manipulated this connection, they could influence the voles’ likelihood to bond with a partner.

Here, “monogamy” doesn’t refer to sexual monogamy. Female prairie voles are more what you’d call “monogamish”: they occasionally mate with all sorts of males, but they have a unique social bond with one partner. When prairie voles make that special love connection, they choose to spend more time with their partner, and pay more attention to them. This is unlike other animals, who often lose interest in an individual after they become familiar. In fact, prairie voles are among the scant five percent of mammalian species (including humans) that demonstrate monogamous social behavior of any sort. That’s why scientists love to study these rodent romances.

“We know from functional magnetic resonance imaging studies in pair-bonded humans that partners activate the brain’s reward system,” says Elizabeth Amadei, co-first author on the study and postdoctoral fellow at Emory University. “However, it has traditionally been difficult to measure brain activity in humans during natural social interactions leading to a pair bond. That’s why we turned to the prairie vole model.”

While it’s true that you can’t spell “vole” without “love,” vole-y behavior can’t quite be ascribed to that complicated human emotion. But the pair bonding represents the kind strong social connection that often creates feelings that humans would describe as love, says co-first author Zack Johnson, a postdoctoral fellow at the Georgia Institute of Technology who contributed to the research while at Emory for grad school. That bond between a pair of prairie voles is for life, and not just “’til death do us part”: if one partner dies, the surviving prairie vole will often stay single. While there’s no perfect human analog, senior author Robert Liu, an associate professor at Emory, says it’s comparable to humans choosing one spouse or partner.

“Like prairie voles, humans exhibit a capacity to form strong and enduring social connections with mating partners, or pair bonds—although we might not be strictly monogamous,” Johnson says.

The study focused on the prairie vole’s corticostriatal circuit, which includes the connection in the front of the brain between the pre-frontal cortex and the nucleus accumbens. These two regions are involved in social behavior and reward pathways, respectively, and they’re in the same part of the brain that contributes to other reward feedback, such as the feeling of satisfaction when you eat food, or even addiction to alcohol or drugs.

In prairie voles, researchers were able to measure the correlation of the activity in the pre-frontal cortex and the nucleus accumbens with electrodes while the voles bonded. How can you tell if two prairie voles are bonding? Like humans, they cuddle, huddling together to cement the bond.

Female prairie voles had different baseline activities in the brain circuit in question before bonding, and these varying levels of connectivity actually corresponded to a tendency to cuddle up. “It seems that individuals have a predisposition to be affiliative,” Liu says. “That was kind of a surprise. We’re not sure yet exactly what it means.”

As the prairie voles spent more time together (and particularly when they mated), researchers saw evience of increased communication between the pre-frontal cortex and the nucleus accumbens in the monitored females. In fact, the changes in this circuit were actually predictive of how quickly the animals huddled together, Liu says.

To solidify the connection between the brain circuit and the bonding behavior, the investigators carried out another experiment using optogenetics, a novel technique that makes biological systems responsive to light. “I think the most exciting finding was that we could use a light-sensitive protein from algae, inject it into a brain circuit, and then use a remote controlled light to influence social behavior,” Johnson says.

While the scientists modulated lasers in the prairie voles’ brains, the voles were allowed to essentially “date.” No, they didn’t go out for dinner or just “Netflix and chill.” (In fact, the prairie voles were explicitly not allowed to physically mate, because physical mating accelerates the bonding process by increasing the activity of the corticostriatal circuit.)

Instead, each male was placed under a cup (a “jail,” according to Liu) that allowed the female to still see, smell, and hear him, but not physically mate with him. Their time together was limited, so that under normal conditions, their interaction wouldn’t be sufficient to actually bond. However, when the brain circuit was activated by the laser, the prairie voles began displaying a preference for their chosen “partner” more quickly than would be expected, given the lack of time and mating.

Because these brain regions are present in other mammals, including humans, Johnson thinks it’s possible that these mechanisms will extend to other species. “But we can’t know for sure without more experiments,” he added. Liu was equally optimistic, pointing out that the brain circuits they studied may also be involved in human social behavior. “We know from imaging experiments in humans that as they view images of partners, a similar part of the striatum can become activated. We know this reward area does get activated by social cues,” Liu says. “What we did in our study is understand how that might come to be.”

The researchers envision that this might even be translatable to treating disorders that are accompanied by dysfunctional social behavior, such as autism. “What we’re trying to do here is to understand the normal mechanisms by which social signals become rewarding to individuals,” Liu says. Many people with autism do not respond to the same social cues, so understanding the mechanism of the response could be useful for the development of therapies.

The researchers are looking toward their next step: probing the neurochemical landscape of this brain region. The neurotransmitters oxytocin and dopamine—commonly dubbed “the happiness drug”—might be a good starting place; previous studies have shown that they could increase activity in this circuit and promote bonding.

Ideally, there would be a way to directly stimulate the circuit in a therapeutic context, Liu says. He noted that optogenetics might be a long shot. Although the light-based technique is currently being explored for retinal use (to treat blindness), it’s too invasive to be practical for handling issues of dysfunctional social behavior. But Liu thinks that techniques like transcranial magnetic stimulation (TMS)—creating a magnetic field near a patient’s head to induce electric currents in their brain—may be more promising in future years, as they are refined.

“Technology is always advancing,” Liu says. “It’s possible that some time in the future, the ability to stimulate particular circuits in the brain may become available and may have some sort of therapeutic usage.”