Why we have more and more days without frost 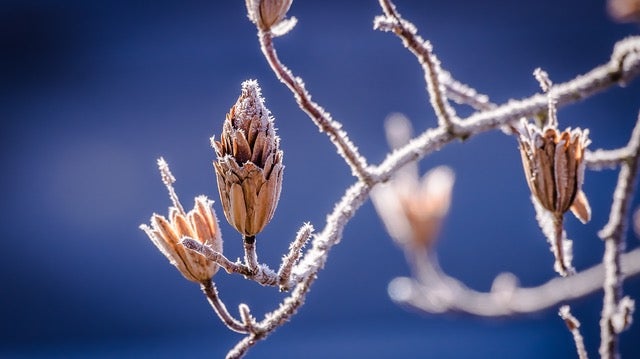 In early March, D.C.’s famed cherry blossoms were ready to pop. An unusually balmy February had nudged the trees from the naked skeletal branches of dull dormancy into full flower production mode. Although most of the flowers were still young—little more than buds—some had reached a status worthy of peeping, with full “puffy white” blossoms. And then came a week of not wholly unexpected back-to-back hard freezes. It was early March, after all, and the National Oceanic Atmospheric Administration doesn’t declare Washington free from frost risk until the end of April.

But over the past few decades, that date seems to have arrived earlier and earlier. Several previous studies have documented a lengthening of the frost-free season in the continental United States over the past century, with the last frost coming earlier in the spring and the first frost arriving later in the fall—leading to around ten extra frost-free days per year. What’s been driving that change, however, hasn’t been clear. And the answer doesn’t just concern our nation’s cherry blossoms: it has a huge practical impact on agriculture and backyard gardening.

“It’s kind of natural to think of that as attributable to global warming, because it makes sense that warmer overall temperatures should increase the likelihood of an early spring frost or a late fall frost,” says lead author Courtenay Strong, an atmospheric scientist at the University of Utah. “However, forecasters know that what really controls unusual frost timing is strong cold fronts, and those strong cold fronts depend more on the atmospheric circulation variability than they do on, say, large scale global warming.”

Strong built on existing data compiled by Gregory McCabe, a research scientist with the United States Geological Survey—temperature data from around the continental United States, as well as an analysis of when frost happens.

“And in that study, they looked at some of the standard circulation patterns that we know about like the Northern Annual Mode and El Niño and found that the correlations were pretty weak,” says Strong.

Atmospheric circulation, those large-scale movements of air around the globe, didn’t seem to be driving frost timing.

“So that leaves open an important question of what is the driver,” says Strong. “Is it a circulation pattern we haven’t found yet or is it global warming﻿?”

To answer that question, he looked at correlations between atmospheric circulation and temperature. But instead of looking at the standard atmospheric indices—the big ones like El Niño that roll off even the most amateur of weather watcher’s tongues—he narrowed in on the circulation patterns that are less well studied. When scientists try to understand what’s happening in the climate system they tend to focus on winter patterns, because they’re larger and have a bigger variability associated with them. El Niño, for example, is strongly correlated with warmer winters in the United States.

But in looking at smaller circulations, Strong discovered new patterns that are highly correlated with frost time. For the Central and Southern parts of the United States, it’s these patterns that have driven shifting frost dates both in the spring and in the fall over the past century. For the Western and Northern parts of the United States, the answer is more complicated than that. In the spring, the main driver is this smaller atmospheric circulation. But the delay in the onset of the fall frost is actually linked to climate change.

“Over the past century, when we look at variations of frost timing, it really is more atmospheric circulation than it is global warming. The direction that the wind blows is more important than how warm the total planet is,” says Strong.

But he cautions that unless we do something about climate change, the trend will reverse by 2100—climate change will be the main driver of our frost-free days.