Turns out the Svalbard seed vault is probably fine 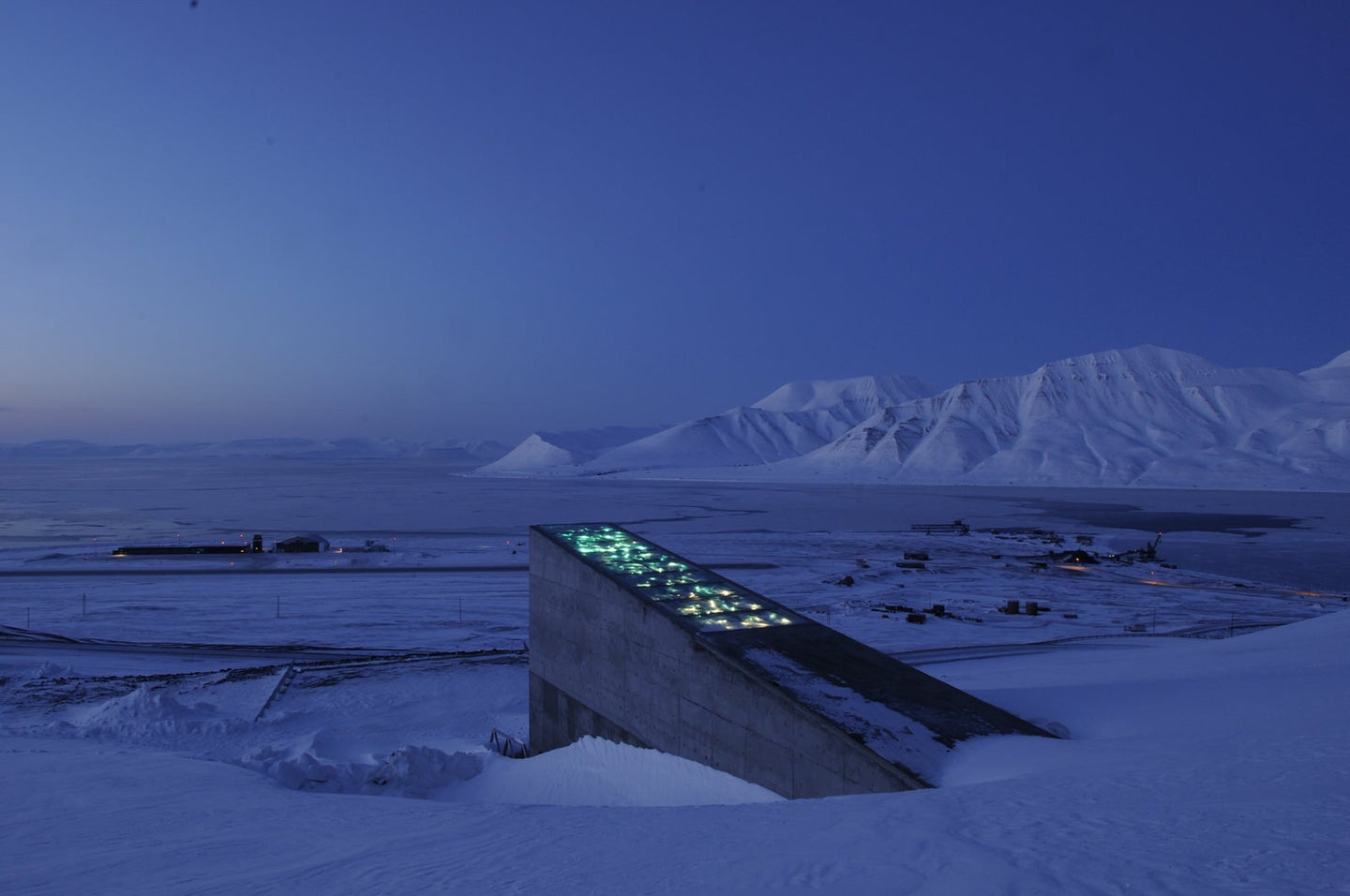 Update 5/22: Recently, media reports emerged of water leaking into the entryway of the Svalbard Global Seed Vault, a facility that stores backup seeds for other seed banks all over the world. The facility is designed to be a backup for the backups. In an e-mail to Popular Science, Hege Njaa Aschim—communications director of the Norwegian Government-led organization Statsbygg, confirmed that the leaks happened last fall, during a time of high temperatures and unusual rainfall in the Svalbard area.

“This fall—October 2016—we had extreme weather in Svalbard with high temperatures and a lot of rain—very unusual. This caused water intrusion into the tunnel leading to the seed vault. The seeds and the vault was never at risk. This was no flooding, but more water than we like. So we are doing measures to improve and secure the entrance and tunnel,” Aschim said.

Aschim added that this year, no water has leaked into the entryway. In October, the water made it about 15 meters into the 100 meter tunnel and then stopped, freezing solid. The volume of the water that leaked in is unknown.

Even before the events of October 2016, Statsbygg had already planned to take measures to waterproof the tunnel, which had an established tendency to let water in during the spring melt.

While the tunnel is overlain by soil and permafrost, subject to the vagaries of weather and climate changes, the seeds themselves are stored in a vault built into the rock of the mountain—about 110 meters from the entrance to the tunnel. Initially, the people working on the project thought that the permafrost near the tunnel entrance would re-form (or re-freeze) after construction of the tunnel disturbed the layer of frozen Earth. It did not.

A failure at a fail-safe vault. The irony is delicious, but that’s not the whole story.

On its website, the Svalbard Global Seed Vault is described by Crop Trust—the nonprofit that runs it—as “a fail-safe seed storage facility, built to stand the test of time—and the challenge of natural or man-made disasters.” It holds backups of seeds from seed banks around the world, with the goal of preserving a legacy of crop diversity in the face of changing climate, natural disasters, and human conflicts. It’s operated for a little over nine years.

Then, on Friday, news spread that water from melting permafrost had gushed into the tunnel and frozen, making the floor slick with ice but not impacting the seeds. It would seem the fail-safe had failed. Or had it?

“Flooding is probably not quite the right word to use in this case,” says Cary Fowler, who helped create the seed vault. “In my experience, there’s been water intrusion at the front of the tunnel every single year.”

Fowler wasn’t at the seed vault this year when the flooding (or ‘flooding’) in question took place, but has extensive knowledge of the project and facilities. He explains that a 100 meter long tunnel leads into the heart of the mountain where the seed vault is stored, running at a slight downward slope. At the base of the slope are two pumping stations to remove any water that might get in. Then there’s a slight uphill section before you reach the doors to the vault itself, where the seeds are kept at 0.4 degrees Fahrenheit or -18 Celsius.

“The tunnel was never meant to be water tight at the front, because we didn’t think we would need that,” Fowler says. “What happens is, in the summer the permafrost melts, and some water comes in, and when it comes in, it freezes. It doesn’t typically go very far.”

Permafrost is a frozen layer of Earth that’s meant to be permanent, but it can be damaged if temperatures rise, or if humans dig into it and create more ways for heat to enter. In this case, the area has been going through a record heatwave, and the construction of the tunnel nine years ago dug into the permafrost and made it more vulnerable. The combination means that near the entrance to the tunnel—where the overlying soil is thinner—meltwater can indeed make its way through. That’s why the designers installed the pumps in the first place.

“If there was a worst case scenario where there was so much water, or the pumping systems failed, that it made its way uphill to the seed vault, then it would encounter minus 18 [degrees celsius] and freeze again. Then there’s another barrier [the ice] for entry into the seed vault,” Fowler says. In other words, any water that floods into the tunnel has to make it 100 meters downhill, then back uphill, then overwhelm the pumping systems, and then manage not to freeze at well-below-freezing temperatures. Otherwise, there’s no way liquid is getting into the seed bank—so the seeds are probably safe.

That doesn’t mean that water getting into the tunnel and freezing isn’t alarming. This is Svalbard: land of snow, ice, and polar bears. Meltwater is still worrying, even if it isn’t an immediate panic-inducing threat. That’s why, as The Guardian reports, the Norwegian government (which operates the facility) is taking action.

“There are not a lot of seed vaults in the middle of mountains in Svalbard, so it’s really important. They need to study where the water is coming in and the amounts to figure out what the situation is,” Fowler says. The groups that operate the seed vault have been looking into the issue for years now, and it appears that they are moving forward with plans to waterproof the tunnel, preventing ice from building up on the floor, and keeping that seasonal influx of water from getting in.

“At the end of the day we have to realize that in a sense, everything is relative with this initiative,” Fowler says. “This whole planet is warming, and that includes Svalbard.”

Even as temperatures increase, areas near the poles like Svalbard will remain colder than other places on the planet, meaning it will take less energy to cool a seed vault down to the required temperatures.

“I think Svalbard is a good place to start from,” Fowler says, “It’s a better starting point that Memphis or New York or just about anywhere else.”

Still worried? Maybe this will help you exhale: “We did this calculation; if all the ice in the world melted—Greenland, Arctic, Antarctic, everything—and then we had the world’s largest recorded tsunami right in front of the seed vault. So, very high sea levels and the worlds largest Tsunami. What would happen to the seed vault?” Fowler says. “We found that the seed vault was somewhere between a five and seven story building above that point. It might not help the road leading up to the seed vault, but the seeds themselves would be ok.”