In the depths of this Idaho lake, the US Navy is testing out its submarine tech

Lake Pend Oreille is 1,158 feet deep and has long provided the military a freshwater spot for research on submersible design. 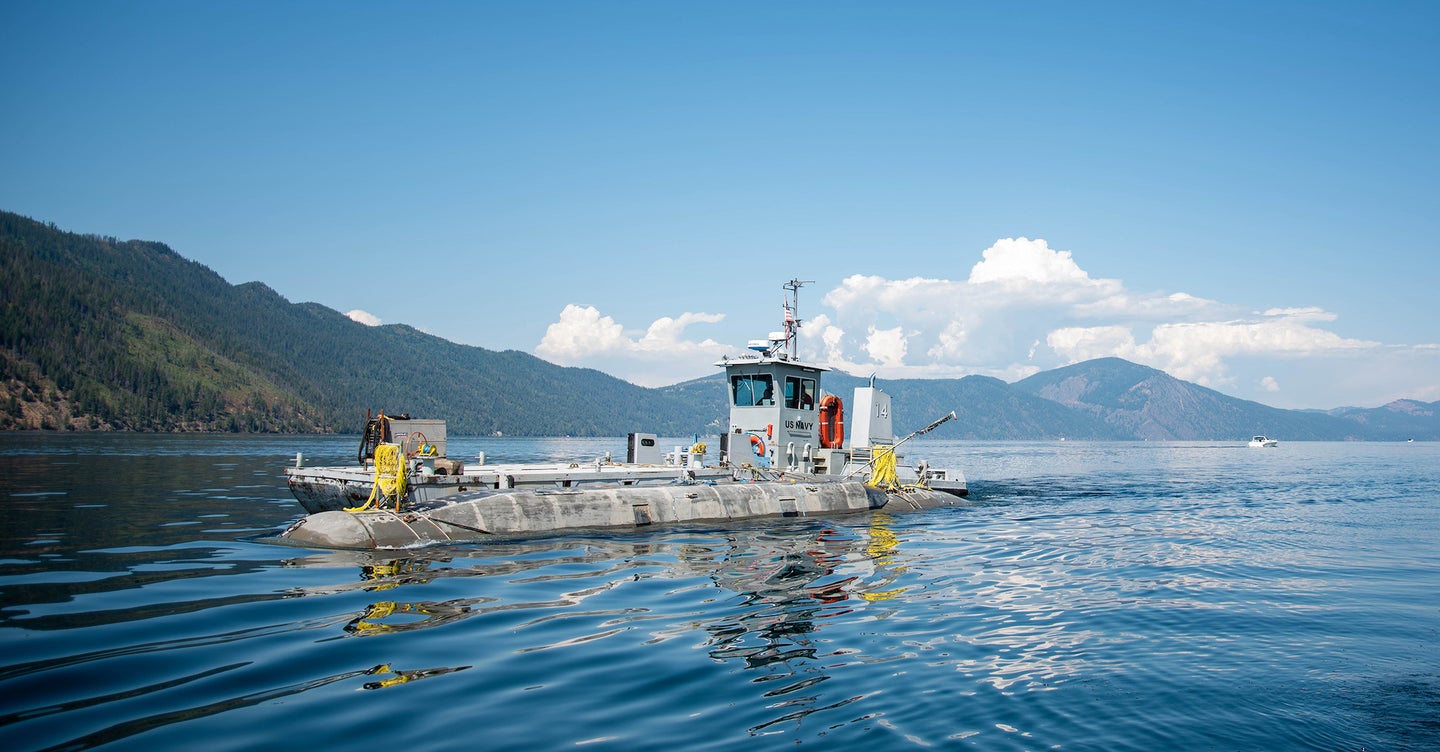 Pike, a submarine model, is seen in front of a tugboat in August. Edvin Hernandez
SHARE

In August, the Pike, a miniature submarine replica, surfaced in Lake Pend Oreille in Idaho. The Pike model is about one-fifth the scale of a real Columbia-class ballistic missile submarine (a class that’s still in development), and its work in the lake is part of the overt testing done by the Acoustic Research Detachment (ARD), a part of the Naval Surface Warfare Center’s Carderock Division. The resurfacing of the Pike happens regularly, along with other testing on the lake. The acoustic research, which dates back to the 1960s, informs how the Navy develops and designs submarines, improving the ability of subs to remain hidden beneath the sea.

For testing, the Pike is brought to the Detachment’s Intermediate Scale Measurement System Range, an array of 158 hydrophones and 36 projectors mounted underwater. “The purpose of that range is to evaluate target strength and structural acoustics,” says Seth Lambrecht, who directs ARD. (Target strength is a metric used to determine the area of an underwater object on sonar).

To make the Pike stand in for the Columbia class, researchers added a Columbia-specific stern to the model. The Columbia class is a nuclear-powered ballistic missile submarine, designed to replace the venerable Ohio class that’s been in service with the same mission since 1981. The submarines are primarily designed to carry and, if need be, fire nuclear-armed Trident missiles, as part of the nuclear force of the United States. (Four Ohio-class submarines have been converted to launch conventional Tomahawk cruise missiles instead.)

Unlike plane-dropped bombs or missiles, or silo-launched ICBMs, the potency of the nuclear-armed submarines hinges on their ability to stay concealed. And that’s where the acoustics come in. Underwater, light is limited, but submarines have hunted and avoided each other for decades using sonar, a kind of underwater echolocation. The Navy has conducted tests at Lake Pend Oreille of new sonar systems developed over the last 20 years, though is unwilling to disclose specifics as to which systems had been tested or developed there.

“We started in the 1960s, so the first class of submarines that we really had an impact on was the USS Sturgeon class, and we were just starting our infancy of the ARD there, so we didn’t really inform the design of those, we just improved them,” says Lambrecht. The Sturgeon class was a kind of attack submarine, designed to find other submarines, especially those armed with ballistic missiles.

“The first class of submarines that we were integral in the design of was the Los Angeles class,” he adds. “And so every class since then, we have been there to basically inform the full scale design since then. So Los Angeles class, Sea Wolf class, Ohio class, Virginia class, and now currently the Columbia class. All those have had great advances to their designs thanks to our contribution.”

Submarines in service will live out their lives in the saltwater of the ocean, but the parts studied by Lake Pend Oreille are tested in the conditions of a freshwater lake, which is different from what they will experience in service. Fortunately, that’s an easily solved problem.

Lake Pend Oreille is 43 miles long, with a depth of 1,158 feet, making it the fifth deepest lake in the nation. That makes it an ideal place to test submarine propulsion, specifically rudders, propellers, and motors. To ensure these moving parts are as quiet as possible, they are mounted on Cutthroat, the Large Scale Vehicle that the Navy claims is the “world’s largest unmanned submarine.” Cutthroat, which resides in the lake, is a one-third-scale Virginia class submarine, the class used to hunt for other submarines under the surface. It is massive: Cutthroat is 200 tons, 111 feet long, and has a 3,000 shaft horsepower electric motor.

While Navy submarines are powered by nuclear reactors with diesel backups, the electric engine on the Cutthroat is more practical for the lake, and skips the noise of the diesel, allowing the research to focus on the acoustic signature produced by the propellers and motors.

The testing at Lake Pend Oreille is not new or secret, though it has improved greatly with modern advances in data collection and transfer. Pike and Cutthroat are just one part of how the ARD collects data on submarine components, but it is the sensor installation, along with modern upgrades, that make it possible to convert the movements of underwater models into useful design data.

“Prior to my time in the 1990s, everything was recorded on tape drive and it was an incredibly cumbersome process,” says Lambrecht. “Nowadays with the computing power that we have, we can record simultaneously on roughly 3,000 sensors at a fairly high frequency rate so we can collect gigabytes of data per minute.”