This robotic stretcher could transport wounded Marines off future battlefields

The Marines have been testing the EMAV, or Expeditionary Modular Autonomous Vehicle. Each one is small enough to fit inside a V-22 Osprey. 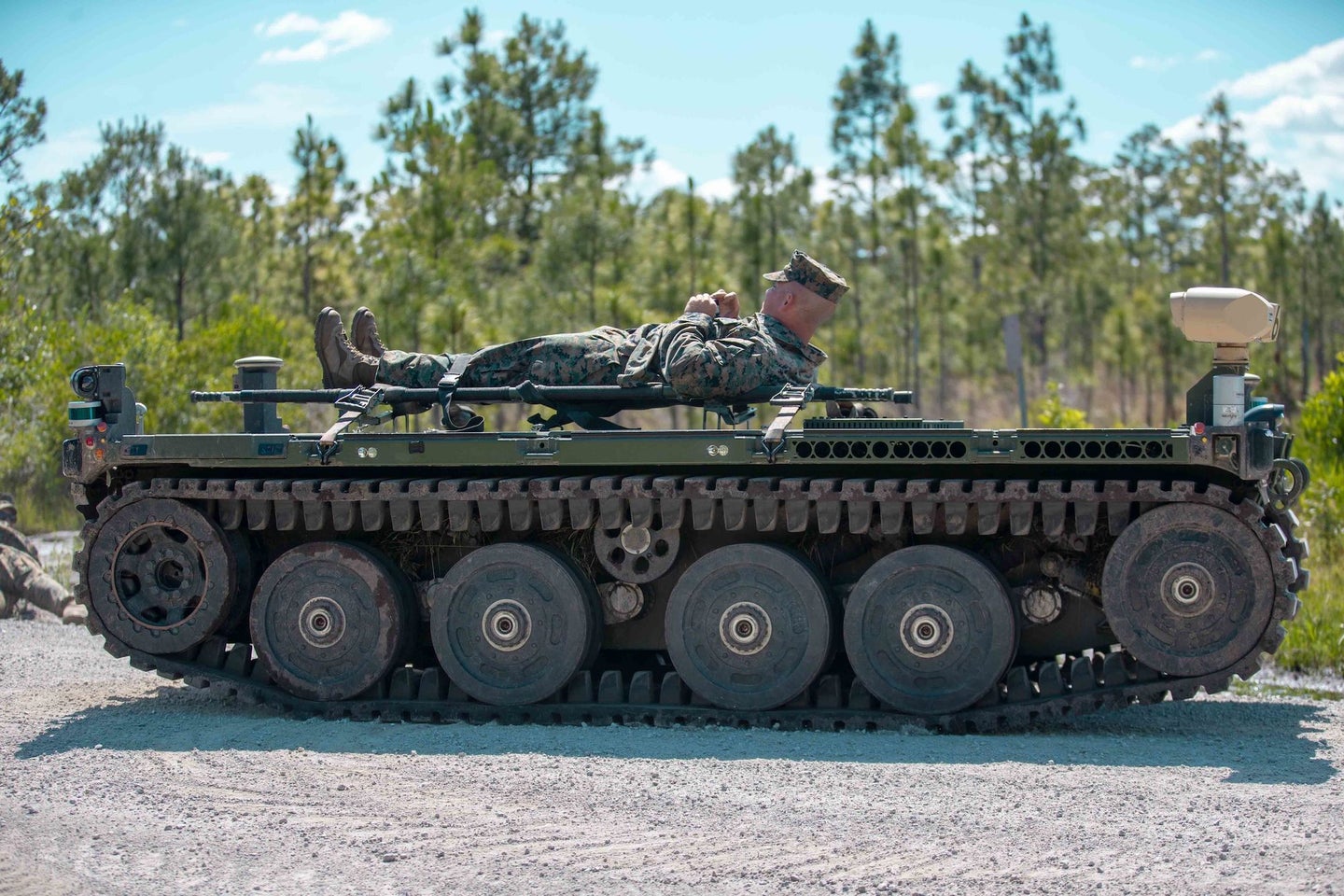 The Marines tested out the EMAV at Camp Lejeune, N.C. this June. Lance Cpl. Emma L. Gray / US Marines
SHARE

At first glance, the Expeditionary Modular Autonomous Vehicle, or EMAV, looks like the bottom half of a tank. It is a tracked vehicle, but one small enough to fit inside the hold of a V-22 Osprey aircraft.

The vehicle, which the Marine Corps tested in North Carolina in June, is a literal platform for the future. As the Marines plan towards not just mechanized but roboticized wars of the 2030s, the EMAV will be there, a sometimes autonomous truck carrying whatever it needs to.

The EMAV is powered by a diesel-electric hybrid engine, allowing it to run parts of its missions silently. It can also, with fuel on hand, provide electrical power for the Marines using it in the field. Its body weighs 7,000 pounds baseline, with capacity for up to 7,000 more pounds of attachments, sensors, weapons, or cargo to fit on top.

“They were designed from the ground up to represent what future tactical unmanned ground vehicles could look like,” said Matthew Fogleson, robotics & autonomy branch head, USMC Warfighting Lab, in a video. “To give us a common platform to develop tactics, techniques and procedures and standard operating procedures.”

Fitting the robot inside a V-22 is crucial to the entire Marine Corps conception of future warfare. The vertical-takeoff and landing Osprey can transport 24 people in seats (or 12 on stretchers) in and out of small clearings zones, allowing it to get right into the action. It’s an important capability for launching attacks, where a gun-equipped EMAV could wheel into action bolstering the firepower of the Marines on the ground. And it’s crucial for evacuations, too. Using the EMAV to carry an injured person from the field lets humans load the person into a vehicle, and puts only the machine at risk during transit towards the patient.

Both modes were on display at the June 24 exercise in Camp Lejeune, and helped the Corps explore how the robot might fit into its broader vision for Infantry 2030.

Casualty is military jargon for both “injured people” and “killed people,” a phrasing so confusing the AP style guide recommended against using it in 2019. Here, the procedure is largely the same: if the person was injured or killed on patrol, the response is to recover them alive, or bring back the remains if dead, and make sure that the proper care is taken either way. For the EMAV, the body would be a cargo item to move autonomously between points A and B. Provided a human is on hand to load their compatriot onto the vehicle, the machine can take care of the driving to and from.

When not transporting bodies, the EMAV can be used more proactively in combat. Controlled from an app on a toughbook tablet, Marines can direct the robot into position, and control the sensors and weapons placed on it. Fogleson said it took about two and a half days for Marines that had never encountered the EMAV before to get up to speed commanding it.

These weapons for the EMAV can include a mine-clearing land charge, launched from on top of the EMAV’s platform. For example, in February 2021, at Twentynine Palms, California, the EMAV launched a rope-like weapon, a string of explosives built to blast a vehicle-width safe path through a field of explosives.

Another weapon that can be mounted on an EMAV is the Common Remotely Operated Weapon Station, a versatile turret that’s a combination of sensors and machine guns or grenade launchers and found on vehicles like Humvees, tanks, or even some patrol boats.

[Related: The US Marines are testing flying, remote-controlled grenades]

Putting a weapon on the platform lets a human operator fight remotely, placing the vehicle in harm’s way instead. With a speed of 30 mph, the EMVAs can also allow for some advantage of maneuvering, positioning itself around hostile forces or scouting ahead of friendly troops.

“Robots are going to operate differently than humans and we have to understand what that means for the Marine Corps in the future,” said Fogleson. “It’s really no different than the Humvees or the other trucks we have had in the past. The vehicle itself is important, but it’s less important than what we’re putting on it. Those warfighting functionary things that we’re putting on it are what really matter, are really going to change the battlefield.”

Check out a video about it, below.