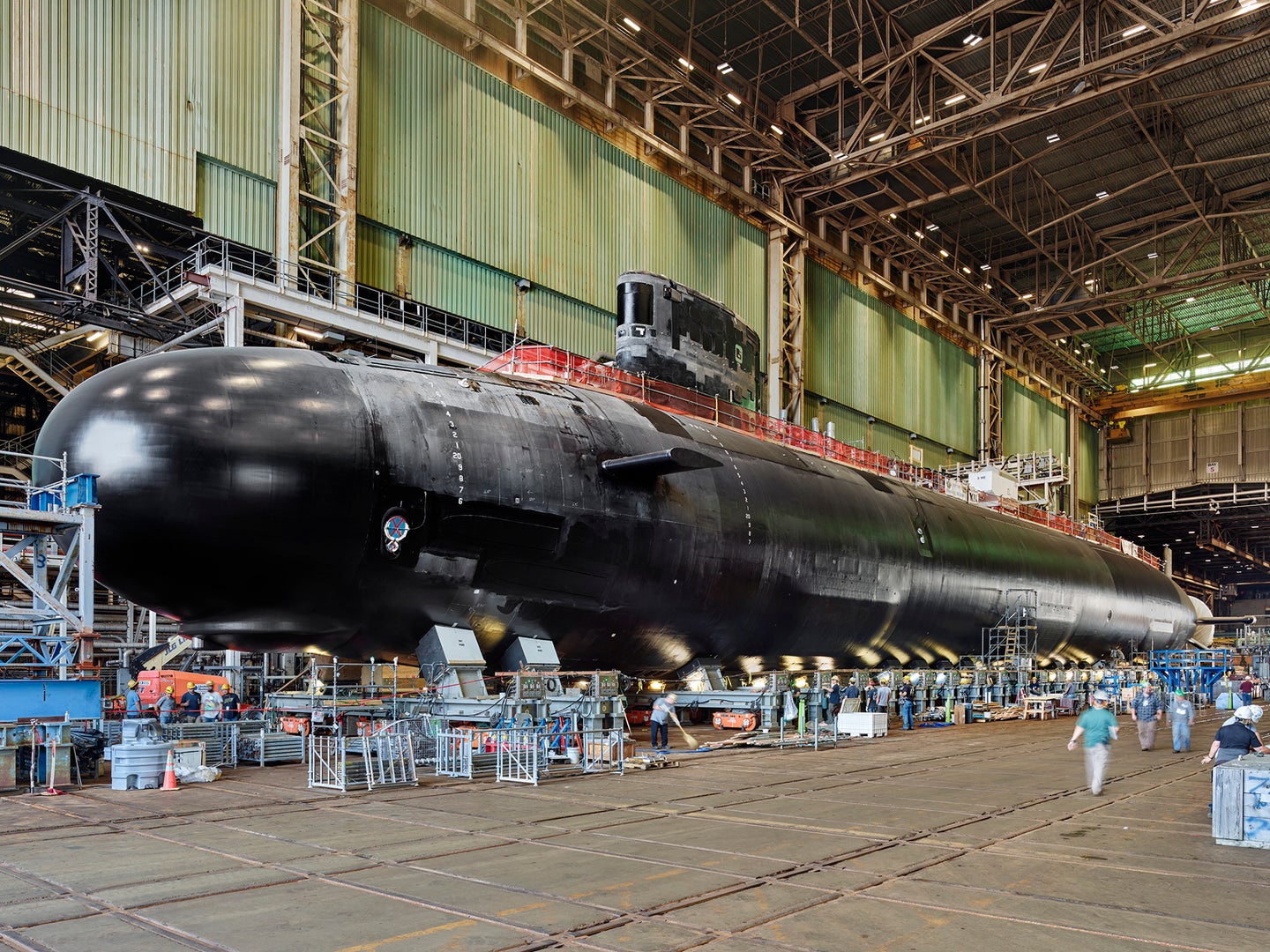 This Virginia-class submarine will soon be carefully shepherded to the sea from Electric Boat’s Connecticut facility with wheeled carts. Christopher Payne

An exclusive look inside where nuclear subs are born

To craft submarines that withstand the crushing deep, New England shipbuilders must become masters of steel.

BEFORE SUBMARINES can carry out their stealthy jobs beneath the waves, they begin their lives in pieces on land. The newest group of American nuclear-powered attack submarines is the Virginia class, also known as SSN-774, a collection of underwater ships that stretch 377 feet long. Their mission? To conduct surveillance, fight other vessels, and rarely, if needed, launch conventional cruise missiles at terrestrial targets. Their maximum diving depth? That’s a secret. Their top speed? Ditto.

What we do know is that each of these submersibles will protect a complement of sailors from the ocean’s incredible pressure—and from the nuclear reactor contained within, which powers everything from the propulsion system to the lights by heating water into steam. For workers at Electric Boat, an arm of General Dynamics responsible for many of these vessels, craftsmanship is more than a matter of pride. A single mistake in their meticulous metalworking could prove catastrophic in the murky depths. Here’s how these subs—known in the biz as boats—come together at facilities in Quonset Point, Rhode Island, and Groton, Connecticut.

↑ A submarine’s outermost layer of metal skin is its main defense against the drink. It can dive deeper than 800 feet, where the pressure will be more than 300 pounds per square inch. The thick steel (its exact width is a secret) starts in flat sheets, which this massive machine exerts thousands of tons of force to curve. The press bends the material slightly farther than necessary, ensuring it springs back into the exact crescent required.

↑ Sparks fly as a robot cuts the bent plates. Not only do these need to be a particular length, but the manner in which they’re trimmed matters too: The ends must have a specific bevel shape so each piece can join precisely with its neighbor. Multiple sections will soon come together to form enormous ring-shaped segments of the future submarine.

↑ These giant blue fixtures receive the curved and cut bits of steel, one of which is seen here suspended by a crane. Inside, robots or humans weld the bent plates into 34-foot-wide rings that will eventually stack into the completed hull. They’ll also fuse I-beams onto the interior to form riblike supports. The more perfectly round the hull, the stronger it is: A circle is the best shape to withstand undersea pressure on all sides.

↑ A portion of a boat stands vertically, as if perched on its tail. Welders complete their tasks—like attaching brackets, pipe hangers, and other elements—atop scaffolding within the reinforced cylinder. If the section were prone (as it is in its final state), the workers would have to do their job on the floor, perhaps lying down to do so.

↑ A welder fuses a portion of a submarine’s many mechanical systems. Whether a seam is on the hull or on another component, it’s vital that this work be done perfectly. Electric Boat will use nondestructive techniques—such as X-rays, dye tests, and magnetic tools—to ensure each part can keep its composure under the literal pressure of the sea.

↑ This green metal structure has been painted and primed, and it could eventually house equipment such as computers. Shipbuilders construct sections like these on the shop floor and slide them into a larger piece of the sub—as if slipping a collapsed ship into a bottle. Electric Boat says this process is three times faster than building within one of the hull cylinders.

↑ Sailors call their triple-stacked bunk beds “racks.” Like much of the boat’s inner chambers, this module is built on the shop floor, complete with elements like lockers, and then slotted into a section of the sub. During particularly packed missions, seafarers sometimes have to share racks by sleeping in shifts.

↑ The team at Electric Boat must carefully inspect even mundane objects, such as this ventilation unit, for flaws. This piece of hardware is destined for the submarine’s interior, where a variety of metals abound: The bathrooms and food prep areas employ stainless steel to avoid rust; workers also ensure that there are no imperfections where mold or bacteria might grow. Where strength is not crucial, as with a locker door, aluminum and other materials can do the trick.

↑ Now that it’s oriented horizontally, as it would be at sea, the decks of this Virginia-class attack sub are visible. When these segments are ready, they will be shipped on a barge from Quonset Point to Groton. By then, each one will be more than 90 percent complete. In Groton, they’ll be mated with other segments. Equipment for the engine room and other large components also has to go in before this step—otherwise that machinery won’t fit.

↑ With its gargantuan sections now firmly welded, the submarine takes shape, its bow pointed toward the door. The vessel’s signature peak—its “sail”—holds sensor-filled antennas called masts that take the place of old-school periscopes, among other equipment. In addition to some paint and onboard equipment, the vessel is still waiting on an official name: It’s known as a PCU, or pre-commissioning unit, until the Navy receives the ship.