The former oil tankers are part of a line of medical vessels dating back more than 200 years. 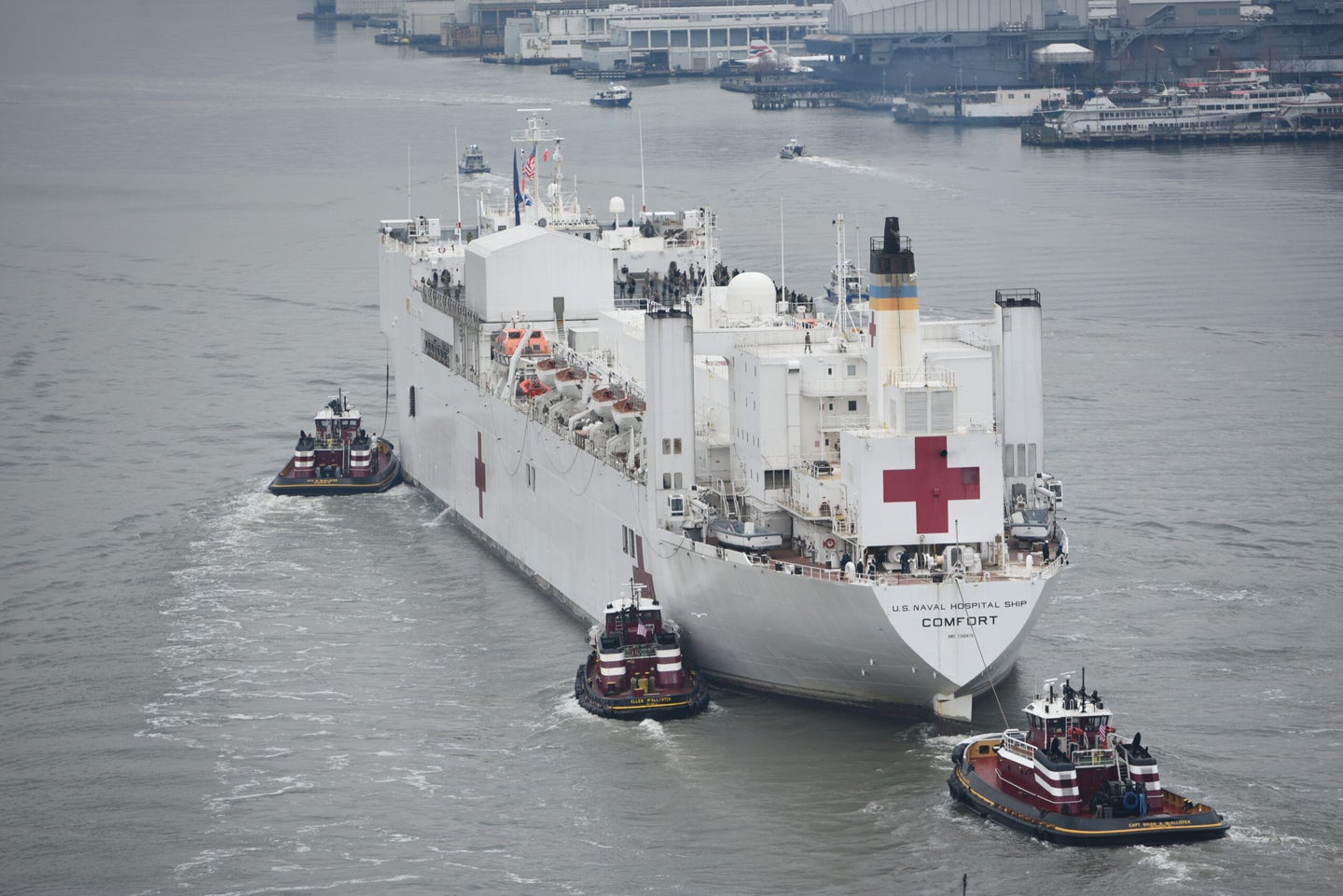 Two giant hospital ships, each nearly 900 feet long, are now dockside in the US’s biggest cities: Los Angeles and New York. The USNS Mercy arrived in LA on March 27, and has already begun taking on patients. Its sibling ship, the Comfort, cruised into New York City on Monday—although its spot at the pier required dredging before it pulled in, according to the Navy.

The goal: take some pressure off land-based hospitals crunched by the COVID-19 pandemic.

Both have 1,000 beds, a dozen operating rooms, and the ability to receive military helicopters. When the Comfort arrived, it had more than 1,100 medical staffers on board, while the Mercy’s count was some 856 on March 29.

It’s rare to see hospital ships sent to US shores, but it does happen: Comfort docked in New York in 2001 after Sept. 11. It wasn’t a trauma center, but instead offered relief workers services like meals and showers. It also traveled to the Gulf coast in the fall of 2005 after two hurricanes: Katrina and Rita. And way back in 1933, a hospital ship called the Relief deployed for an earthquake in Long Beach, California.

But this moment is different. “This is uncharted territory, for ships to be specifically deployed stateside in a pandemic—it’s never happened before,” says André Sobocinski, the Navy Medical Department’s historian.

A somewhat analogous situation comes from the influenza pandemic of 1918, when the United States was also fighting in World War I. It had a fleet of three hospital ships: the Solace, plus two older ships with the same names as their modern counterparts—the Comfort and Mercy. Those were essentially “ambulance ships,” Sobocinski says, transporting casualties back from Europe to the United States. These vessels “certainly did have flu cases on board, and they tried to keep the influenza patients separate from the other patients,” he notes.

Like nearly all of the hospital ships in US naval history, today’s Comfort and Mercy were not originally built for that job. Both are originally 1970s-era oil tankers, and each was reborn as a medical facility in the 1980s.

In fact, for more than 200 years, the US Navy has deployed hospital ships that started out their lives as different vessels. The first, the USS Intrepid, was a ketch that became a medical boat in 1804 and was in service for just three months. Of the 27 total hospital ships, only one—the Relief, commissioned in 1920—was built from the ground up for that job. The ships have otherwise been vessels like passenger boats, freighters, oil tankers, and even a submarine tender. They’ve mostly had placid names, like the USS Bountiful or USS Tranquility. Go back far enough, though, and they had more routine designations, like the USS Red Rover (the hospital ship of the Civil War) or the USS Idaho of 1866.

All told, there have been three US hospital ships called the Comfort and three dubbed the Mercy; the first Comfort and Mercy ships, both commissioned in 1918, were originally passenger liners.

For a period of time during the early 20th century, the ships had a tradition that didn’t go over so well with the rest of the Navy: the top job on the ship—the boat’s commander—was a doctor, a rule that began in 1908 and came from Teddy Rosevelt. The regular Navy, Sobocinski says, “hated this.” The policy changed in 1921 because of the boss of the Relief. “The crew lost confidence in his ability to serve as the skipper of the ship,” Sobocinski says, “and he was relieved of duty.”

Today, many of the medical staff on board the Comfort and Mercy are called “hospital corpsman,” which are medic-like personnel on board. But rewind the hospital-ship history far enough—to the era before the Civil War—and you’ll find a stranger name for some of the crew members on board: they were called “loblolly boys.”

They received this nickname thanks to the food they served: “Loblolly was the name for a porridge that was given to the sick,” Sobocinski says. Staff on the Comfort and Mercy of the modern era have more resources at their disposal than porridge, though: each ship has a pharmacy, plus a large galley that can crank out thousands of meals.

This story has been updated. It was first published on March 24.