The Estonian vehicle can shoot out thousands of gallons of water per minute to combat a blaze. 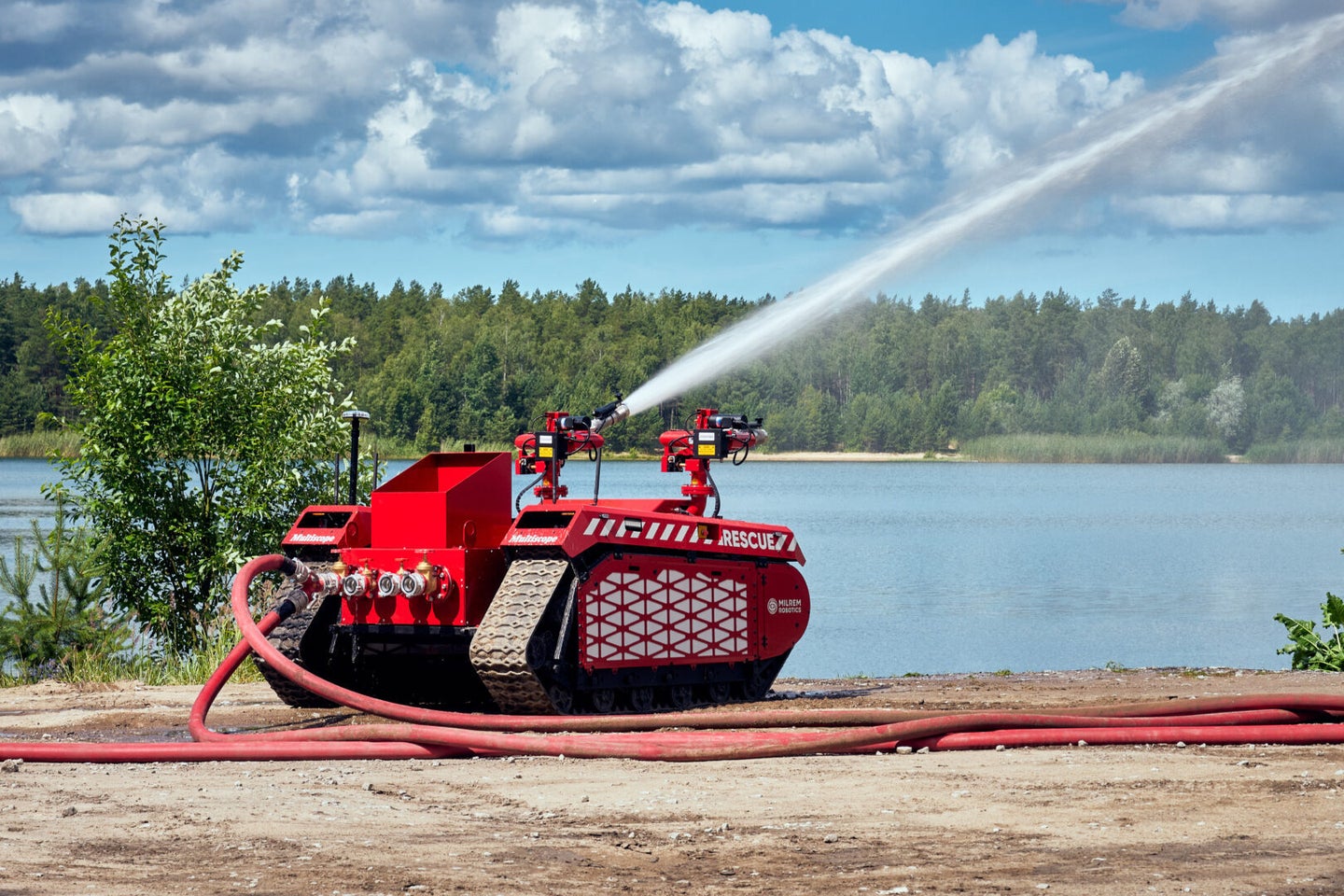 It looks like a small tank, but instead of shooting weapons, it shoots out water. Milrem Robotics
SHARE

Lurching forward, the red robot immediately unloads from both barrels. Torrents of water pour out, with the machine injecting foam into the spray and covering a wide arc of forest before it. The Multiscope Rescue Hydra, a medium-sized tracked vehicle, is a firefighting robot built on a military body, ready for deployment against fires in rural or urban settings.

Made by Estonia’s Milrem Robotics, the Multiscope Rescue Hydra was on display at the SOFINS special forces exhibition outside Bordeaux in France. The exhibition ran the last week of June, and caters specifically to the military units tasked with missions that fall outside the usual purview of traditional forces.

Fighting fires isn’t a specific military billet, but it fits under the broader umbrella of tasks the military has to do in addition to the work of war. These fires can be anything from regular residential accidents, environmental conflagrations near a base, or the kinds of blazes that can come from explosive detonation or active fighting on a battlefield. In all instances, it is helpful for the military to be able to snuff that fire out.

What the Multiscope Rescue Hydra offers is a way to fight fires, with eyes up close on the blaze and directional control on the nozzles, without risking a human in immediate proximity. This is the overall selling point of this entire family of military robots. The remotely controlled robot body can do a task up close to danger while keeping humans at a safe remove.

”The Multiscope Rescue Hydra developed together with InnoVfoam can alleviate dangers firefighters face and help contain fires faster,” said Kuldar Väärsi, CEO of Milrem Robotics, in a release. “This is also an ideal tool for military rescue services that face the same challenges as other firefighters.”

Managing explosions, and their fiery consequences, has long been a military role, and one that is especially suited to robotics. For those working on explosive ordnance disposal team, the ability to roll a tracked machine into place, and then use a robotic claw to manipulate a suspected bomb or improvised explosive device, is key. Robots for bomb demolition and inspection were an integral part of the US wars in Iraq and Afghanistan, and have seen some use by domestic police forces.

What’s more, forest fire fighting has since at least the 1940s been a task carried out in the US with military-inspired organization. In part, that was a way for the United States to fight fires sparked by intercontinental incendiary balloons. And in 2019, the US Air Force teamed up with the United Kingdom for an exercise training the autonomous navigation system for a swarm of small drones on adapting to forest fires, which can move in ways that are hard to anticipate.

While the Hydra resembles more traditional tracked robots, more than just a red paint job sets it apart. The Hydra’s body accommodates four pressurized water hose lines which run behind it. Those lines allow it to spray anywhere from 530 gallons per minute to 5,300, at a range of up to 200 feet.

[Related: Navy SEALs could get new airborne backup. Here’s what the planes look like. ]

On just electric power, the Hydra can run for between 30 and 90 minutes. Using diesel fuel, it can run as a hybrid for between 10 and 12 hours. The Hydra can drive up hills, can ford through shallow water, and can carry over 1,600 lbs of payload. This could be a water tank, for fires where it will not have access to fire hydrants. The Hydra can also attach tethered drones, allowing smaller robots to fly ahead and serve as a kind of scout for the machine.

To guide all that mass into action, the Hydra has cameras and infrared cameras, as well as chemical sensors to detect gas leaks or other airborne particulates. Those sensor stations, dubbed “fire monitors,” can pivot independently of each other, guiding their attached nozzles for wide coverage. To ensure that the robot’s sensors still function in the heat of an inferno, the Hydra even has sprinklers to cool the sensors.

The entire apparatus is remotely piloted by a human. That ensures a human driver is directing the firefighting, even as they are free from the immediate danger.

Check out a video, below.