Microscopic mesh could be the key to lighter, stronger body armor 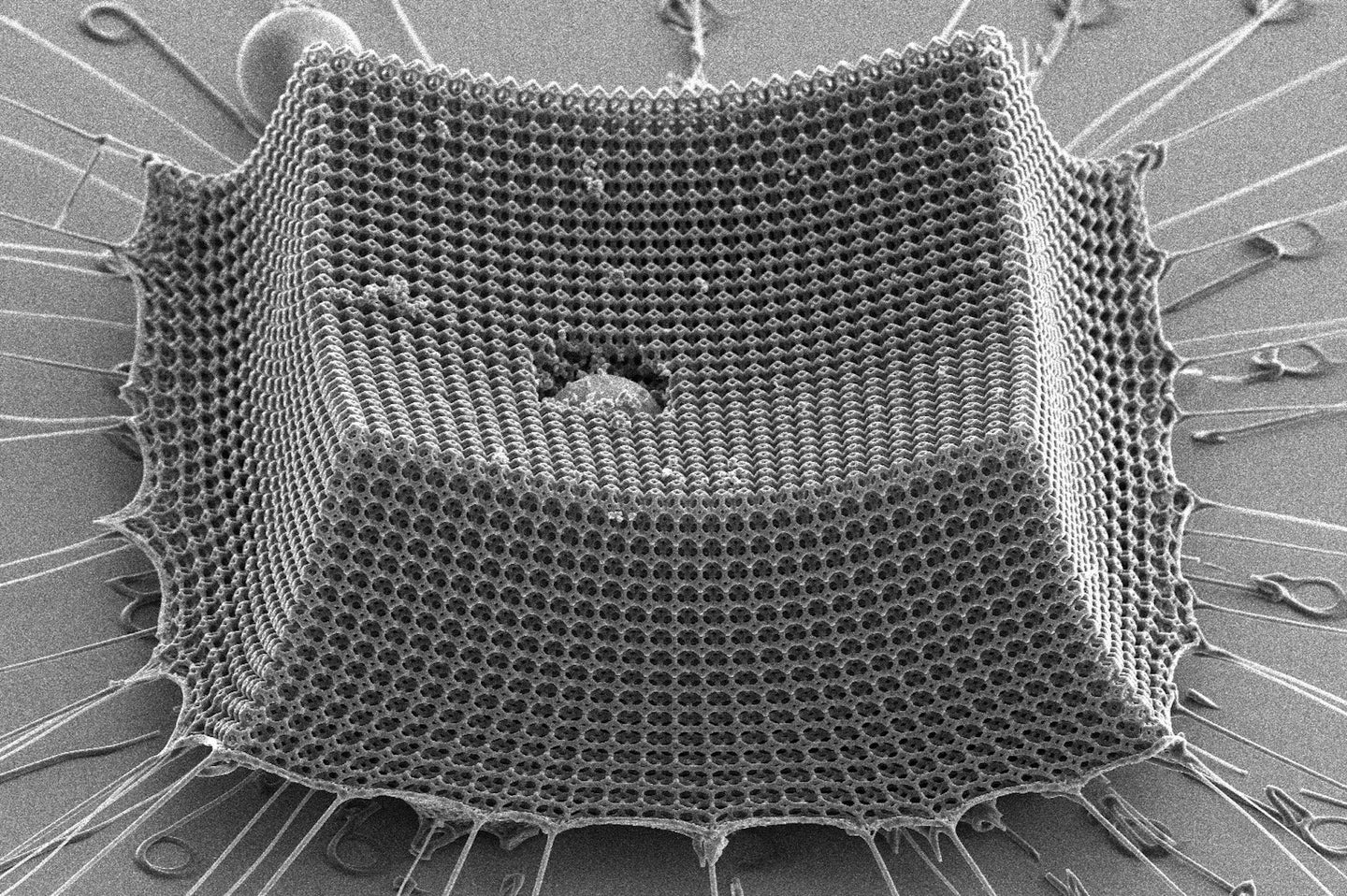 New research, funded by the Army and Navy and published in June, demonstrates that a novel kind of nanomaterial architecture was robust against super-tiny projectiles, which could lead to stronger armor in the future.

A bullet is a metal mass at velocity, designed to tear a hole in a person. Bulletproof armor, from early metal plate to kevlar to more advanced concepts, works by dispersing that energy as quickly and efficiently as possible, ideally leaving the wearer bruised instead of punctured.

For bulletproof armor to be effective, it needs to distribute and deaden the energy of bullets quickly, it needs to be durable against repeat impacts, and it needs to be light and useful enough that people actually wear it.

Kevlar, invented in 1965, is five times as strong as steel. It made modern body armor possible as it allowed protection at a much lighter weight than in the past. Kevlar still has limits, as it can be torn apart by shrapnel or pierced by higher-powered bullets.

The new study, published in Nature Materials as “Supersonic impact resilience of nanoarchitected carbon,” suggests that a greater ability to stop bullets exists in the exact nanostructure architecture of new materials.

“Nanoarchitected materials truly are promising as impact-mitigating materials,” lead study author Carlos Portela, assistant professor of mechanical engineering at MIT, said in a release. “There’s a lot we don’t know about them yet, and we’re starting this path to answering these questions and opening the door to their widespread applications.”

What the researchers did find is that the latticed structure of pyrolytic carbon, heavy on struts and open spaces, was stronger than a denser structure with less room to absorb or diffuse the impact.

“We show the material can absorb a lot of energy because of this shock compaction mechanism of struts at the nanoscale, versus something that’s fully dense and monolithic, not nanoarchitected,” said Portela.

To launch a nanoscale projectile at the carbon structure, the researchers aimed a laser through a slide coated with gold, which pushed particles at the target at high speeds.

Accelerated by laser, the particles traveled at speeds from 40 to 1,100 meters per second. The low end is about 89 mph, or slightly slower than a fastball from a Major League pitcher. At the top end, that’s about 2,460 mph, or roughly 700 mph faster than a bullet from a typical assault rifle.

When hit at speed by these projectiles, the material crumpled where directly hit, yet the remaining structure stayed intact. By having the space to absorb and dissipate energy, the nanomaterial architecture remained intact, with the projectile embedded in the frame but not piercing through it.

“Its architecture and nanoscale material size effects give specific energy dissipation ~70% superior to that of Kevlar composites and nanoscale polystyrene films for the same specific impact energies,” write the study authors, with the suggestion that the material’s strengths can be used at larger scales.

If so, these tiny trusses could be the basis of new armor for everything from people in combat to objects in space. In the latter case, a coating that can protect against impacts from debris traveling at 17,500 mph and prolong the lifespan of satellites and spacecraft. When it comes to body armor, this could allow not just the lightweight protection of heads and torsos, but possibly be light and useful enough to cover much more of a soldier’s body.

[Related: Meet the woman who set a record for running in a 96-pound bomb suit]

Increasing the life expectancy of soldiers in combat takes the form of two kinds of intervention. One area that has seen massive improvement over the last century is battlefield medicine, where staunching bleeding, speeding evacuation, and rendering aid all mitigate harm already done. The other is armor, which has as often as not taken the form of dense, heavy vehicles as well as cumbersome yet life saving vests and helmets.

If armor derived from this research can be stronger than Kevlar at the same weight, or as strong as present Kevlar but lighter, it becomes a lot less like specialized gear and closer to the ease and functionality of everyday clothing.

Earlier advances in armor, while offering immediate impunity relative to existing weapons, have led to specialized design of anti-armor rounds, which can increase the mass of a projectile and the density of material to puncture once-impervious barriers. Against specialized weapons, any new armor derived from this research could run into trouble.

What it does promise, if it works at scale as well as the authors hope, is a means of better, lighter protection against most standard bullets in use by militaries today. Testing at scale will determine if the nanoscale architecture’s dissipation works, making this a real case of truss, but verify.