Want to know how does Bluetooth work? We’ll pair you with some answers.

Here’s a primer on the modern wireless standard with a Dark Ages name. 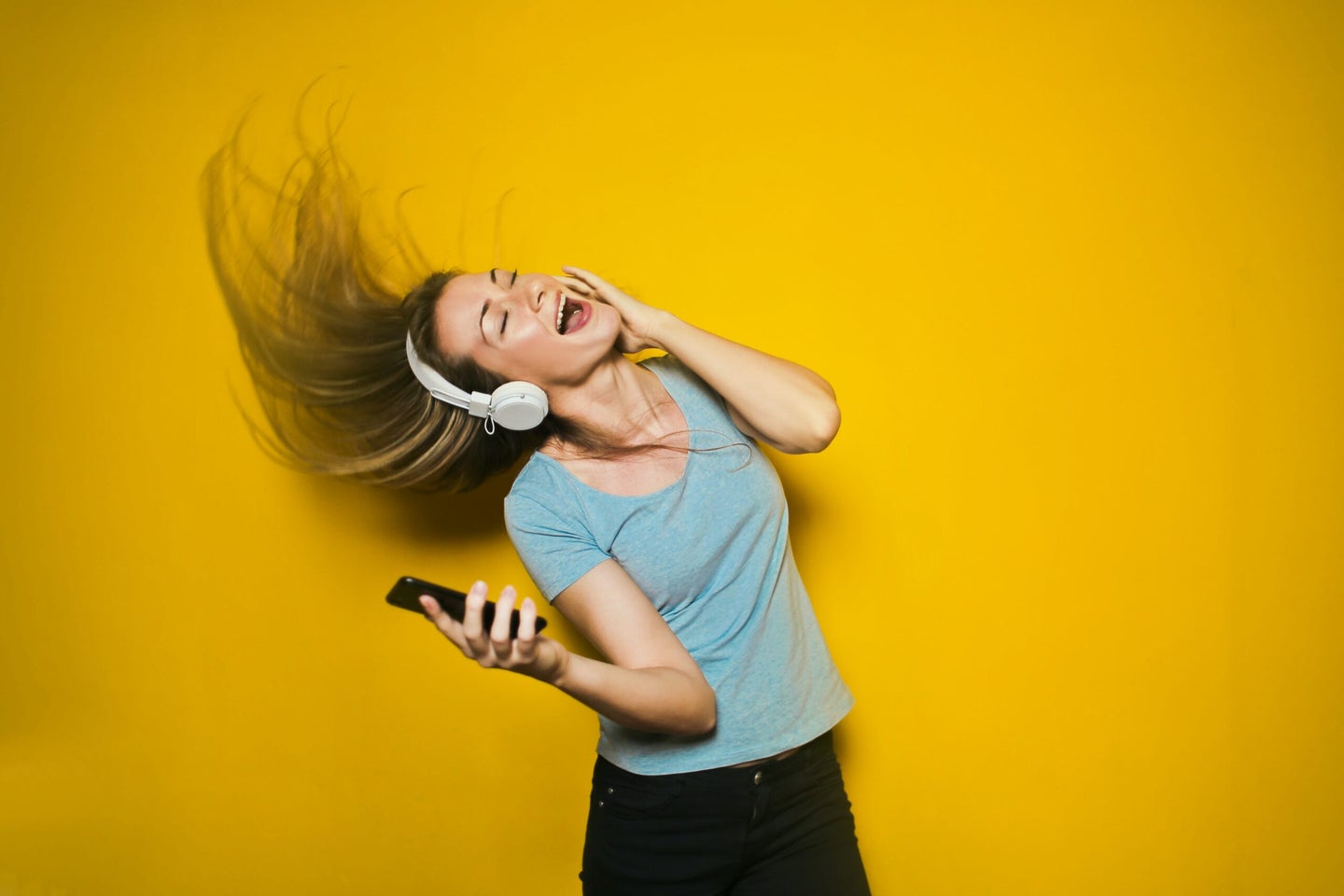 Thanks to Bluetooth headphones, we can get wired without wires. Bruce Mars, Unsplash
SHARE

If you’ve bought a new phone or wireless accessories in the last decade or two, Bluetooth is a word you’ve heard. It’s a now-ubiquitous standard that keeps all your tech connected without wires, the invisible links that help you feel free. It’s also a word that makes all kinds of thoughts cross your mind, like “What’s a Bluetooth?” “How does Bluetooth work?” and “Why didn’t they call it ‘Greentooth’ or ‘Pinktooth’ instead?” If you’ve ever had any of those questions, we have some answers.

While you may be wondering, ‘How does Bluetooth work,’ the first question really is what is Bluetooth? Bluetooth is a low-power, short-range radio technology that can connect and share data between electronic devices. For example, a Bluetooth speaker can connect wirelessly with a laptop, allowing it to receive and play music from the computer. Likewise, Bluetooth earbuds can connect to a phone to enable wireless, hands-free calling (and music), or connect a game controller to its console. The tech has its limits, though: Bluetooth typically stays stable at 33 feet or less. Wander to the other side of the house and put one wall between your devices? We’ve all experienced our favorite songs start to stutter when the Bluetooth connection reaches its limit.

And how does Bluetooth work?

How Bluetooth works is that a radio using a frequency-hopping spread spectrum zings data between dozens of short-wavelength UHF (ultra-high frequency) channels. Chipsets in your iPhone and Beats Studio Buds, for example, recognize each other and exchange data via a signal that’s switching between radio frequencies hundreds of times per second. This hopping reduces interference issues and keeps the Bluetooth signal secure.

Just because all your devices are Bluetooth doesn’t mean they communicate in exactly the same way, however. Bluetooth uses algorithms called codecs to encode and decode data into packets to make them easier to transmit. There are many kinds of codecs, which support different depths of data, but not all of them are created equal and only one of them is universal.

Different codecs—those initials on the side of the box, like SBC, AAC, aptX, and LDAC—affect power usage, transfer rates, audio quality, stable connection range, etc. The only codec mandated to be in all Bluetooth devices is SBC, or Subband Coding. All other options, whether they’re geared toward high resolutions for audiophiles or low latency for gaming, are integrated at the discretion of the gear developer. Just remember that two Bluetooth-enabled devices must support the same codecs or they will default to SBC, which offers average, MP3-quality audio.

Most of the time, if you’re pairing a phone or tablet with a Bluetooth device such as speakers, that’s done manually by going into Settings, turning Bluetooth on, putting the device into Discoverable mode (typically by pressing a marked button), and selecting the device you want to pair. On a computer, you’ll find a Bluetooth symbol in the upper right corner of your screen. Make sure it’s turned on and then go through similar motions. Some manufacturers, however, do provide apps that help devices handshake with less user steps.

Bluetooth isn’t Wi-Fi, though both use radio signals to communicate wirelessly. Broadly speaking, a Wi-Fi network is a high-power access point to connect devices to the internet and each other to pass high volumes of data quickly to one another. Wi-Fi is faster, more secure, operates within a longer range, can support more users, and is highly configurable. Typically limited to 2.5 milliwatts, ad-hoc Bluetooth connections are low-power, slower, and are used for quick, simple, direct pairings between two devices instead of fixed-location applications.

So, what kinds of devices use Bluetooth technology?

Would it be an exaggeration to say…all of them? Almost all modern smartphones, tablets, smart home gadgets like smart lights, hearing aids, portable Bluetooth speakers, wireless headphones, desktops and laptops, keyboard and mice, your car, game controllers, kids’ toys, printers, scales, toothbrushes…more personal items. It’s almost easier to list what doesn’t use Bluetooth these days. If a piece of tech can connect to other devices wirelessly, there’s a decent chance it’s using Bluetooth. More than 4 billion products with Bluetooth ship annually, according to company figures. Not every wireless device uses Bluetooth, of course, but it is the most common way we get electronics to talk to each other without wires.

OK, so when was Bluetooth invented and why did they name it that, please?

Ericsson is credited as the original company that first worked on developing Bluetooth and the first mobile phone to include Bluetooth is the Ericsson T39, which was released in 2001. But one device preceded this phone: a Bluetooth headset released in 1999. Former Ericsson engineer Jaap C. Haartsen was inducted into the National Inventors Hall of Fame in 2015 for creating the foundation of what became Bluetooth. His work showed how short-range radio connections could be used to share data in mobile phones.

Since you’ve used Bluetooth and probably don’t own anything from Ericsson, however, they obviously didn’t hold onto it too tightly. Indeed, Bluetooth is a technology standard and isn’t owned by any one company. It’s maintained by the not-for-profit Bluetooth Special Interest Group (or “SIG” for short), which was created in September 1998 by five member companies in order to unite and standardize three versions of the same tech: Ericsson (which pioneered the radio technology), IBM, Intel, Nokia, and Toshiba. Bluetooth SIG, as it’s known for short, sets the power consumption and communication specs, etc., that companies must follow in order to license the Bluetooth technology. In 2021, we’re up to Bluetooth version 5.2, which was released in January 2020. There are more than 36,000 members of Bluetooth SIG.

Bluetooth is a really cool name, once you know what—or, more accurately, who—it came from initially: Harald “Bluetooth” Gormsson, a Danish king from the 10th century who also ruled Norway during his 28-year reign. Lore says that Gormsson earned his nickname from the dead blue color of one of his teeth, but he’s suspiciously not smiling in any artistic depiction we’ve seen of him.

Bluetooth SIG credits the name to former Intel executive Jim Kardach, who suggested it in a 1996 standardization meeting between representatives of Intel, Ericsson, and Nokia. “King Harald Bluetooth…was famous for uniting Scandinavia just as we intended to unite the PC and cellular industries with a short-range wireless link,” Kardach, who had apparently read a novel featuring the monarch, explained.

Interestingly, it wasn’t originally supposed to be the official, public brand. According to the company’s official history, the royal moniker was originally a placeholder “until marketing could come up with something really cool.” The developers wanted to call it RadioWire, but didn’t have enough time to ensure that it wasn’t already trademarked before launching.

Once they stuck with Bluetooth, however, they had fun carrying the theme into the logo by incorporating the Scandinavian linguistics of the 10th century. The Bluetooth symbol is a mashup of the runes that represent the king’s initials. (If you thought the logo was just an attempt at a futuristic “B,” you wouldn’t be alone.)

By now you should have a good understanding of how does Bluetooth work. Bluetooth will likely come to even more devices in the next few years. According to the 2021 Bluetooth Market Update, a new standard called Bluetooth Low Energy (“LE” for short) released in 2020 increases the efficiency of new headphones and opens Bluetooth to be viable in more products, including hearing aids and other hearing accessibility devices.

That’s all quite the global victory for an ancient Scandinavian royal.