The mystery of a spooky Confederate submarine might finally be solved

We may finally know what killed Civil War soldiers on the Hunley. 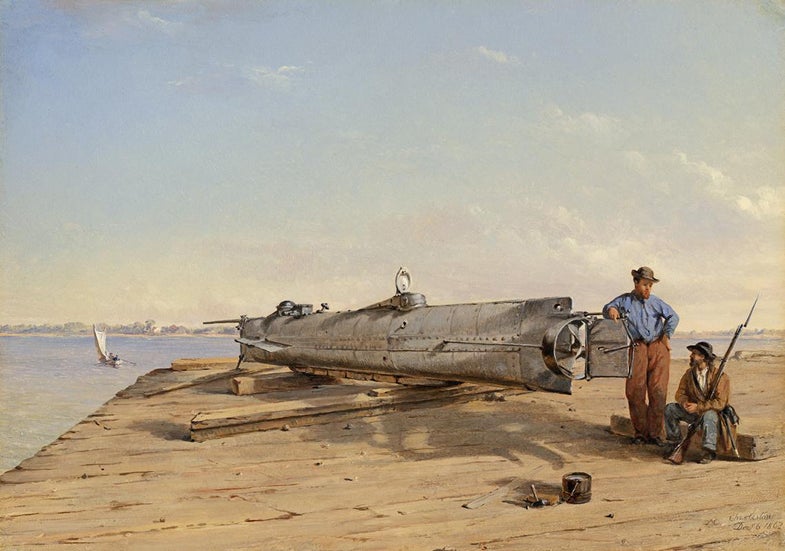 When most of us think of the early days of submarine technology, we envision hulking WWI-era U-boats. In fact, the first submersible military vessel made an appearance in the American Revolutionary War. An acorn-shaped pod called the Turtle could take one man into the deep, with the aim of affixing explosives to enemy ships.

But the Turtle never really got out of its shell. The first sub to sink an enemy ship was the Confederate H. L. Hunley, a hand-cranked contraption that struck the USS Housatonic off the coast of Charleston, South Carolina, in 1864. But the Hunley isn’t just famous for its superlative spot in the history of naval warfare. It’s also known for carrying a puzzling—and kind of creepy—mystery.

When the Hunley fired a black powder torpedo at the Housatonic, the Union ship lost five men in the resulting blast. But the Hunley lost its entire crew. The 1995 discovery of the sub some 1,000 feet away from the site of the Civil War showdown revealed that all eight members of the crew had died seated at their battle stations. The sub was, for the most part, intact, and there was no sign that the crew had made any effort to evacuate the vessel or pump out water. None of them suffered broken bones. By all appearances, they’d died without a struggle.

“Every time they removed a concretion and uncovered more of the Hunley, it just got more mysterious,” says Rachel Lance, an engineer who specializes in underwater blast trauma. “We have all the pieces of the artifact, but there was never any smoking gun.”

But Lance and her colleagues may finally put the mystery to rest. In a paper published Wednesday in PLOS ONE, she shows evidence that the soldiers died instantly, struck so hard by the force of their own torpedo’s blast that the soft tissues of their lungs and brains would have taken immediate, fatal damage.

The findings aren’t all that shocking when you consider the entire scenario. The submarine was a prototype with a hull less than half an inch thick—much thinner than those of the submersibles that would follow in later wars. In fact, the vessel had sunk not once, but twice during testing. It had already killed 13 Confederate soldiers by the time it made it fired its famous shot.

And speaking of that shot: the Hunley fired 135 pounds of black powder—about the size of a beer keg—attached to a spar that stuck out from the vessel by around 16 feet.

But while it seems reasonable enough that the crew wouldn’t have survived such an intense blast in their (relatively) puny sub, drowning or suffocation still would have been the more obvious causes of death. “This is a really exceptional scenario,” Lance says. “Honestly, if I hadn’t known where the skeletal remains were, I would not have guessed that this would have occurred.”

In other words, not a likely explanation for eight men found sitting securely at their battle stations with no signs of a struggle to escape.

The other popular hypothesis is known as the “lucky shot theory.” Perhaps, some scholars have suggested, a Union soldier on the Housatonic had managed one perfect strike on the sub with his gun. But ballistic tests with period-accurate firearms ruled that out.

“We determined that given the current in that area at that time, if the sub had started sinking right away—because of a lucky shot—there would have been no way for it to end up so far away.”

So with the help of a local artist and a nearby tobacco farmer, Lance finally put her own hypothesis to the test. The artist figured out how to create a scaled-down model of the Hunley, and the farmer—a real history buff, Lance says—let them blow it up in his pond, replicating the black powder blast of 1864 to reveal just how strong of a shockwave would have shot through the walls of the sub.

“To get any closer to confirming the results, you’d need a full-size sub and a full-size bomb,” Lance says. “I’d love to do that, but I somehow doubt I’ll ever get the funding.”

But the scaled-down results do indicate that the crew was subjected to as much as 60 milliseconds or more of trauma when the shockwave plowed through them. The force would have torn apart their lungs, filling them with blood. Protected by the hull from shrapnel and debris, their bones were spared signs of trauma. But had their lungs survived to be examined, Lance says, their cause of death would have been clear. “It’s unlikely that they would have even realized what happened,” she says.

Lance believes it’s unlikely that Civil War-era engineers understood that such a fate could befall their crewmen. “They knew it was risky, for sure, because the sub had sank twice already during training,” Lance explains. “But underwater mines were kind of invented during the Civil War. There were so many layers in which this mission was unprecedented. I don’t think they really had the blast knowledge to understand this particular risk at the time.”

“If it took us 150 years to figure out what happened, it couldn’t have been that obvious,” she says.

Lance thinks this piece of the Hunley’s history is solved, but she hopes the public won’t lose interest in the once-so-mysterious submarine.

“It survived 150 years in salt water, and that just doesn’t happen,” she says. “There’s still so much more to learn. I hope people keep in mind that this is still an ongoing thing, and that they should still go visit the Hunley and see it for themselves.”