The US Marines are testing flying, remote-controlled grenades

What to know about a small device called the Drone 40, and how it can become an airborne explosive. 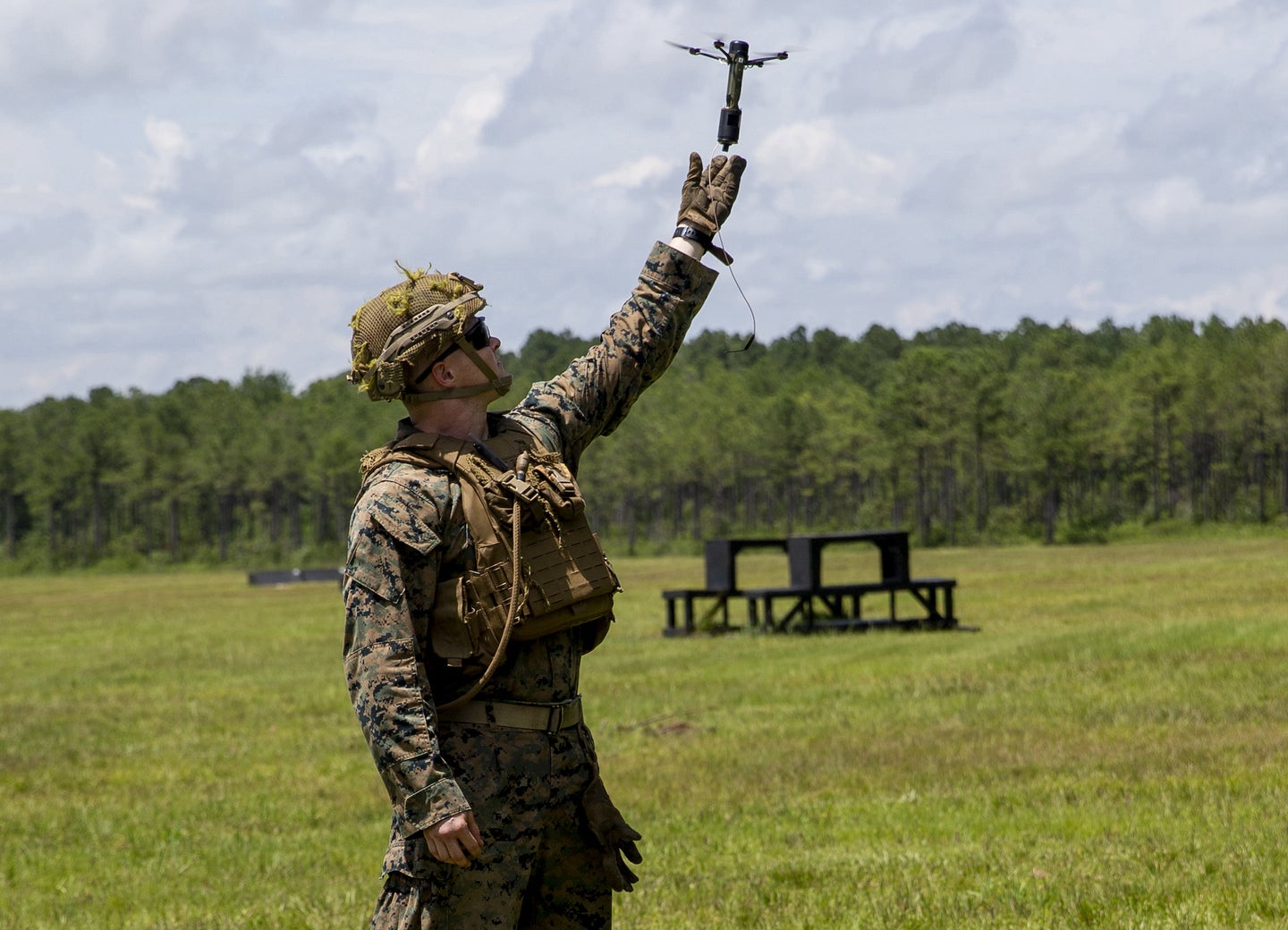 A Marine tests out a flying grenade during an exercise. Pfc. Sarah Pysher / US Marines
SHARE

With hands held overhead, the Marine waits for the grenade to spin up, and then releases it into the air. With a drone and its four rotors attached to the top of its body, the grenade takes off, a gentle flight for the typically hand-tossed munition. Later in those same exercises, the grenade, still unexploded in this exercise, flies back for a landing, and the Marine catches it by a tether.

This scene took place July 7 at Camp Lejeune, North Carolina, as part of a training exercise. The flying grenade is a Drone 40 modular quadcopter. It can be either a scout or a loitering grenade. In action, it looks goofy, like someone saw a “Sky Dancer” flying toy from the 1990s and decided it would be a great basis for a bomb.

What sets the Drone 40 apart from a host of other small drone designs is the long, vertical fuselage. Unlike most quadcopters, which are wider than they are all, the Drone 40 is alien in appearance. The shape of its body, and the name, both refer to the 40mm grenade launcher, a standardized way to hurl an explosive in battle. The Drone 40 can be both hand-tossed, as in the video below, or it can be fired as a grenade from a launcher.

At Camp Lejeune, the grunts of an experimental infantry battalion tested gear, including the Drone 40, to see what the Corps could learn, and if the Corps could adapt it for use in the future.

The origins of the Drone 40 trace back to a specific problem facing the Australian military. As Drone 40 maker DefendTex explained it in 2019, Australian soldiers had rifles accurate to 1,600 feet, but were fighting against foes in places like Iraq and Afghanistan with weapons deadly at over 2,600 feet. Launching a grenade is one way to close that gap. Another way would be to fly a grenade immediately to where the enemy is positioned, detonating it on contact. When used this way, the drone becomes an expendable weapon, destroyed in the blast.

[Related: This drone can detect human screams. What could go wrong?]

Yet Drone 40 can also swap out the explosive payload for a handful of other options. An ISR payload, which stands for intelligence, surveillance, and reconnaissance, consists of a camera that can stream video to the control tablet of its remote human pilot. Using the drone to find an enemy position, and then returning to send it as a grenade, is one way having the Drone 40 could facilitate battle.

Every Drone 40 is battery-powered, and depending on weight and flight time, can be airborne for something between 30 and 60 minutes. At its fastest, the drone can travel nearly 45 mph, and DefendTex claims it can operate at a range of up to 12 miles, far eclipsing the gap in rifle ranges.

Planned payloads include not just cameras and traditional explosives, but smoke or flash grenades, allowing even more tactical flexibility. A drone that can fly and detonate into smoke could provide cover for a fireteam maneuvering into position. With a flash-bang, the squad could incapacitate enemies temporarily, moving in to disarm and capture. Other options for the drone could include an electronic warfare payload, something to attack signals and circuits, or a laser designator, allowing the drone to pinpoint a spot for other precision weaponry.

British armed forces already used a version of the Drone 40 in Mali earlier in 2021, though only used the scouting payloads.

As for the Marines at Camp Lejeune, the same exercise also included a drone called the Switchblade, which also carries munitions and is destroyed when its payload explodes. In service since 2013 with the US Army (and with Marines since at least 2015), the Switchblade is also compact, and can be launched and piloted by a single person. It’s a fixed wing, instead of a quadcopter, and falls into the same sort of niche: letting infantry punch further and heavier, without air support on hand.

[Related: The Pentagon wants a bazooka that can take down drones]

In the field exercises, the Marines will discover how much effort it takes to pilot these weapons, how hard they are to repair or restore, and how much effective reach they can actually achieve. The difference between a manufacturer’s brochure and the weapon as delivered can be life or death.

On an absolute scale, the Drone 40 and the Switchblade answer the same question: can infantry put a small box of hurt where they need it, via remote piloting? It is the kind of question with huge implications for infantry fights and tactical engagements—a possibly useful weapon on the edge of much more complicated wars.

Check out the video, below.