The Most Technologically Advanced Warship Ever Built

When the Navy needs to surprise and overwhelm an inland enemy, it can send in its new Zumwalt-class destroyer. 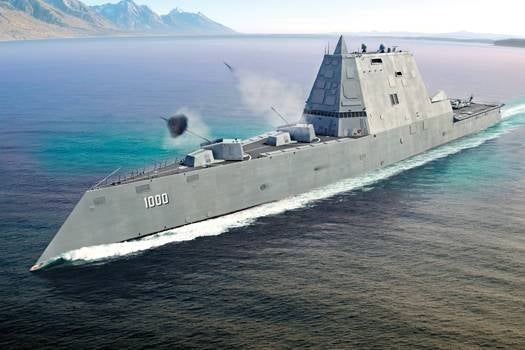 When the USS Zumwalt rolls out of dry dock at Bath Iron Works in Maine next year, the Navy’s newest warship will be 100 feet longer than the destroyers currently serving around the globe—and nearly twice as massive—yet it will have a radar signature 50 times smaller and will carry half the crew. Packed bow to stern with state-of-the-art radar, stealth, weapons, and propulsion systems, the USS Zumwalt, which will be operational in mid-2016, will be the most technologically sophisticated warship ever to hit the water.

A complement to Arleigh Burke–class destroyers that currently protect the Navy’s prized aircraft carriers from aerial attacks, the Zumwalt-class destroyer is for laying waste to land. It can evade enemy detection; slip into the shallows along foreign coastlines; and deliver devastatingly accurate firepower hundreds of miles inland, supporting special operations ashore, clearing the way for amphibious troop landings, or knocking out air defenses. It’s a seaborne battering ram—a specialized piece of equipment for smashing in the enemy’s front door.

In the 1990s, the U.S. military carried out successful amphibious assaults in Somalia and elsewhere. But as coastal defenses around the world grew more advanced—not least those of Iraq, which would have been a serious threat to U.S. troops had they invaded Kuwait by sea during Operation Desert Storm—the Navy decided to build the Zumwalt.

Traditional destroyers create huge wakes and their hulls tend to light up radar dishes. By contrast, the angle of the Zumwalt‘s hull reduces its radar signature 50-fold (on radar it looks like a fishing boat) and slices through the water like a 600-foot harpoon, creating little wake and making it more difficult to see from both above and below. Though it rides low, the Zumwalt can operate in just 30 feet of water, scanning for airborne and underwater threats with planar-array radar and advanced sonar.

If geopolitical events call for securing nuclear facilities in an unraveling North Korea or Iran, the Zumwalt is the Navy’s surest way to arrive unannounced. From the shallows, the Zumwalt can then wipe out enemy defenses up to 72 miles away. Sailors don’t cram shells into the dual 155-millimeter guns nor do they clear the casings. The guns are controlled—point, click, boom—by a computer in the command center; they fire GPS-guided shells, considered by the Navy to be more like rockets than artillery because of their ability to adjust trajectory in flight. The ship also carries a battery of SM-2 antiaircraft missiles, surface-targeting Tomahawks, missile-destroying ESSM interceptors, and vertically launched ASROC antisubmarine torpedoes, all distributed among 80 missile cells that line the Zumwalt‘s hull. The location of the cells ensures that the missiles can’t all be disabled by a single enemy strike and serves as an extra layer of defense around the ship.

Click through the slideshow below to see how one historic Korean War battle might have played out if the U.S. military had the Zumwalt in 1950:

The Zumwalt generates far more power than it needs. Unlike other Navy vessels, its all-electric integrated power system supports shipboard operations using a single massive energy source: four gas-turbine generators that collectively produce 78 megawatts of electricity, almost 10 times more than Arleigh Burke–class destroyers. Its dual 35-megawatt advanced induction motors produce a top speed of 30 knots, but at 20 knots the Zumwalt retains three quarters of its power (58 megawatts) for other systems. Those systems—everything from fire suppression to robotic cargo handling belowdecks—are largely automated, allowing the Zumwalt to operate with a crew of just 148, compared with the Arleigh Burke‘s 276.

In spite of its sophistication, however, the ship will see limited service. Over the past decade, the Navy’s priorities have shifted away from a shallow-water, land-attack destroyer. Missile threats from North Korea, Iran, Russia, and China (which boasts of possessing a “carrier killer” missile) made it vital to protect aircraft carriers. And after a decade of land wars, the strategic emphasis is shifting to open-water conflict.

As a result, the U.S. military is currently moving 60 percent of its naval forces to the Pacific. The Zumwalt isn’t particularly suited to that sort of theater, and in an age of shrinking budgets, it makes less sense to continue pouring $3 billion apiece into untested amphibious battering rams than it does to buy a variety of smaller, less expensive boats armed with proven air-defense technologies.

But the ship should still be valuable. Any conflict that spills from the open water to, say, the many contested islands in the South Pacific is one that the Zumwalt could settle. The Navy could also be called into action in the Strait of Hormuz, where tensions with Iran are coming to a boil. And, in fact, a recent report commissioned by the Pentagon did recommend that the U.S. deploy more amphibious-ready ships to the Pacific to ensure that Marines in the region have the right tools for intervention. If geopolitical events call for the securing of certain sensitive assets, such as the nuclear facilities of an unraveling North Korea or Iran, the Zumwalt is the Navy’s surest way to arrive unannounced and open the way inland.

The ship’s most immediate role will likely be that of an incubator for advanced technologies as the Navy updates its fleet for 21st-century conflict. The Zumwalt is an ideal platform for power-intensive future weapons systems, such as lasers and electromagnetic rail guns. And just as changing threats and shrinking budgets pushed the Zumwalt class out of favor over the past decade, future conflicts could call the destroyers into action should the Navy need to kick in anyone’s door.