Here are the options for military action against Assad. 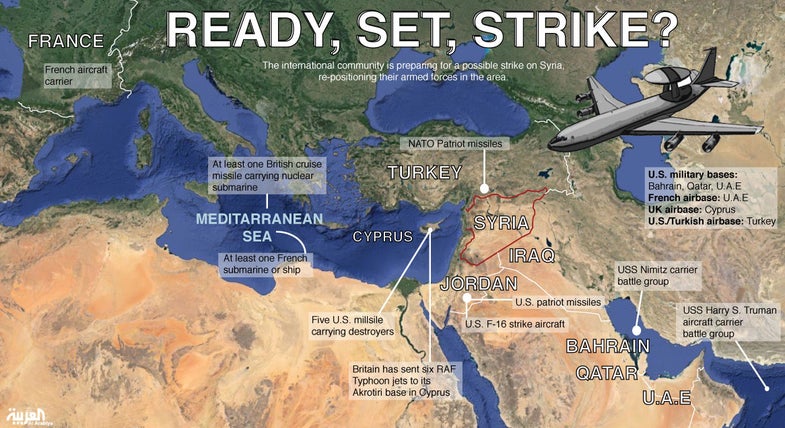 The United States and its allies are considering an attack against Syria’s government. Such an attack is limited only by the people, aircraft, ships, and vehicles available in the area, so when the U.S. Navy moves more ships into the eastern Mediterranean, it starts to look a little like war.

This infographic, by Farwa Rizwan at Al Arabiya English, looks at the military maneuvers already underway. France and the U.S., with Turkish and UK airbases serving as a staging point, are the nations most likely to act against Syria’s government. Until yesterday, when this map was published, the United Kingdom looked ready to intervene, but then its Parliament voted against intervention. I’ve left every reference to British military assets on the map intact here, but it’s unlikely now that the UK will play a direct role. All these countries are allies as part of NATO. Here is what they could bring to an intervention:

It’s hard to conduct a bombing campaign without a place for the warplanes to land. France has an aircraft carrier in the western Mediterranean that could be moved closer; there’s a shared U.S./Turkish airbase in Turkey; the UK has an air base in Cyprus, about 160 miles away from Syria; France and the U.S. both have bases in the United Arab Emirates; and the U.S also has bases in Qatar and Bahrain. There are also two American aircraft carriers in the region: the USS Nimitz and the USS Harry Truman, both in the Persian Gulf. It takes about 5 days for a carrier to move between the Suez and the Persian Gulf (provdied Egypt doesn’t close the canal), but they might not even need to do that. With mid-air refueling, and with permission from Iraq, American fighters could take off from carriers in the Persian gulf and attack Syria.

The map also shows American F-16s and British Typhoon planes. These are strike aircraft, or known in an earlier era as fighter-bombers. They can fight enemies in the air, as well as attack vehicles, buildings, and troops on the ground.

America, France, and the UK all have ships in the Mediterranean Sea ready to strike at Syria, if need be, with cruise missiles. Both ships and subs carry cruise missiles, which can hit targets more than 1,000 miles away. You can read more about cruise missiles, and how they work, here.

Also noted on the map are Patriot missiles, which is a bit of an odd choice. Patriot missiles are anti-ballistic, fired to intercept incoming enemy missiles. Syria has some long range ballistic missiles and last summer threatened to use them against foreign intervention.