When a roadside bomb or other explosive device goes off, it hits everything nearby with an extreme blast of pressure.... 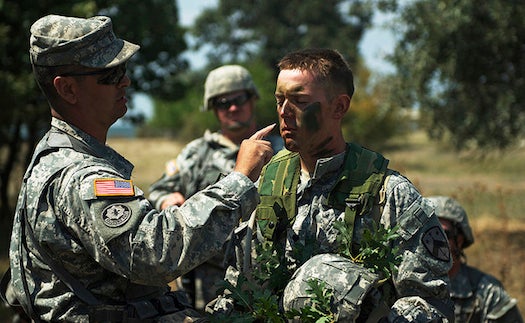 When a roadside bomb or other explosive device goes off, it hits everything nearby with an extreme blast of pressure. Almost simultaneously comes a heat–more than 1,000 degrees Fahrenheit–that’s hot enough to cook skin. Presented today at a meeting of the American Chemical Society, a new invention will try to counteract that, and do it through a technology that’s already been used for hundreds of years: camouflage paint.

The Army, which funded the project, expects certain criteria to be met for its face paint. It’s mandated that the paint (even heat-protective paint) be water-proof, for example, and also contain DEET, a pesticide to ward off bugs, so this new paint has to meet those conditions in addition to its new role as heat shield.

Most types of makeup are produced with hydrocarbons–chemicals that burn when in contact with intense heat. Hydrocarbons being a nonstarter, the Army went with less flammable silicones. DEET is flammable, too, weirdly, and the guidelines required a full 35 percent of the paint to be made of the stuff. To sidestep that issue they placed a hydrogel around it, a chemical that’s mostly water. The heat from a bomb lasts a mere two seconds, but researchers managed to get the paint to protect for a whopping 15 seconds, so early testing has definitely been successful.

The next step? Putting the design from the University of Southern Mississippi team to use, then creating a colorless version for use by firefighters. See a video of the paint in action below from New Scientist.