The U.S. military has been looking for ways to smarten up its dumb projectiles for years–look no further than this... 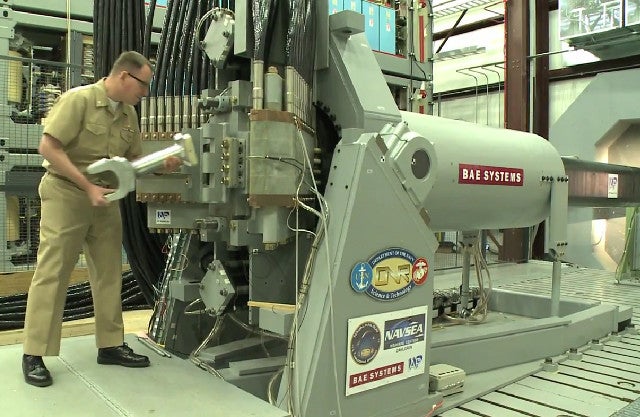 The U.S. military has been looking for ways to smarten up its dumb projectiles for years–look no further than this GPS guided mortar round recently fielded by the army–hoping to increase lethality while reducing collateral damage. The Navy is no exception to this trend, and the seaborne branch is looking for precision beyond its current arsenal. The Office of Naval Research wants a guided munition for its experimental electromagnetic rail gun that can alter the course of a 5,600 mile per hour projectile in flight.

Electromagnetic rail guns use powerful magnets lined up in series along the length of a cannon to accelerate projectiles to thousands of miles per hour in an extremely short span, giving them ranges in the hundreds of miles. Next to the Navy’s current capabilities–officers claim the newest surface gun systems, which aren’t even online yet, will be able to reach targets up to 72 miles away–that’s a vast improvement. But thus far, the Navy’s rail gun program has cost $240 million over seven years, and the technology is still very much restricted to the lab.

Part of that’s a power issue. Rail guns require a massive amount of electricity that current naval ships cannot spare if they can generate it at all. The Navy hopes its rail gun will debut on the next-generation of high-powered ships, like the Zumwalt class destroyer (currently slated to enter service in 2015) by early in the next decade. But what’s the point of hurling a projectile hundreds of miles if you can’t hit your target?

To that end, the Hyper Velocity Projectile program aims to develop naval rounds that work with both conventional ship-based artillery and proposed future combat systems like the electromagnetic rail gun. These rounds would be GPS-guided and navigable in flight, more like cruise missiles. In fact, the idea is to eventually make naval surface gun rounds more like rockets, a Navy source recently told PopSci, increasing their accuracy and lethality many times over and ending such strong reliance on the missile for pinpoint strikes.

According to the proposal as described by Danger Room, these new rounds would be 24-inches long, weigh between 20 and 30 pounds, and have an effective range (in standard naval artillery format) of more than 30 miles. For rail guns, that range could reach out to 200 miles, or perhaps beyond. Live fire demonstrations of the new round are on the schedule for 2017. We’ll have to wait and see if rail gun capability and guided munitions technology both mature enough in that interval to create something devastatingly unique for the U.S. Navy’s arsenal.