It charges eight batteries and two USB devices at once. 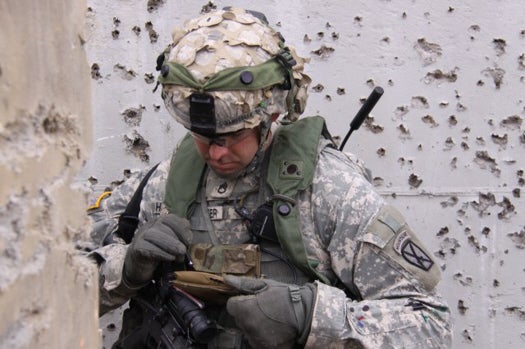 Battery chargers are finally getting a military upgrade. This is big! Not in a literal sense—that honor goes to the previous battery charger used by the U.S. Army, which was the size of a suitcase and either vehicle-mounted or left to rest on a table. It was hardly something a soldier could carry into the battlefield or on patrol.

Now, the military has downsized to a charger smaller than a shoebox. Dubbed, creatively, the Universal Battery Charger, the new charger weighs only six pounds. It can charge eight batteries and two USB devices at once, which is useful for the GPS systems, radios, and smartphones soldiers keep with them. The charger itself can draw power from available electrical sources. According to Marc Geitter, an engineer on the project, this includes generators, fuel cells, solar panels, wind turbines, and vehicle cigarette lighters.

Soldiers aren’t always near available power sources, so the Universal Battery Charger will come with a foldable solar panel. Additionally, the new charger is designed specifically to work with another (very awesome) army development in portable energy, the Re-using Existing Natural Energy Wind and Solar System, or RENEWS. Transported in two 70 pound cases, RENEWS is a portable wind turbine with solar panels that can power two or three laptops continuously. Combining it with the Universal Battery Charger adds versatility to the system, and gives soldiers access to power even when far beyond the grid.