The DoD's track record shooting missiles from the sky with laser beams is checkered at best, but DARPA is nonetheless taking a new 150-kilowatt energy beam into trials. 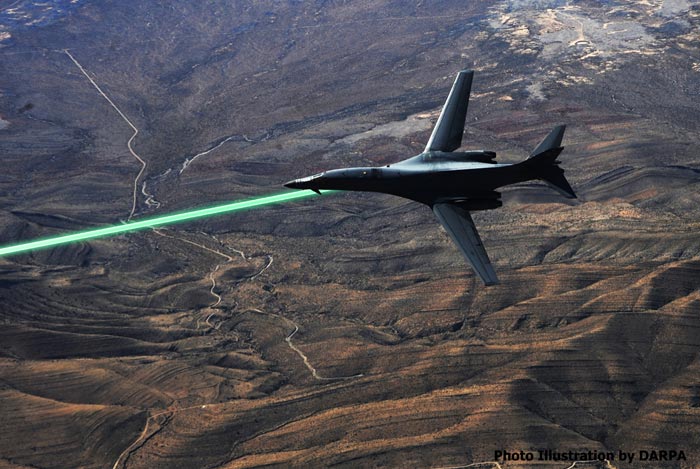 A rendering of a B-1 bomber employing its laser defense weapon. DARPA
SHARE

The last time the Pentagon took an active interest in airborne laser weapons it resulted in a massive fail, literally. The hulking Boeing 747 housing the Missile Defense Agency’s Airborne Laser Test Bed missile killer–a 1 megawatt laser designed to knock boosting ICBMs out of the sky–was killed after billions of dollars in development yielded an unreliable (at best) defensive capability. But now the DoD is looking into fielding much smaller airborne lasers aimed at shooting down much smaller missiles, and they could go into testing as soon as 2014.

The 150-kilowatt lasers DARPA is considering testing as part of its High Energy Liquid Laser Area Defense System (HELLADS) program are ten times smaller and lighter than even those of similar power today–which means some kind of technology leap is in the offing that DARPA thinks is realistic. The Agency has contracted General Atomics (makers of the Reaper and Predator drones) to have two laser weapons ready to go by 2014 so both the U.S. Air Force and the U.S. Navy can try them out.

The USAF’s interest in this technology is pretty clear-cut. Mounted on a fighter jet or bomber, these scaled down 150-kilowatt lasers would be capable of shooting down air-to-air missiles or surface-to-air rockets that normally might deny access to airspace or endanger pilots infiltrating enemy territory. For the Navy’s air wing the same is true, but its interest also likely extends to close-in ship defense operations as well.

As the Navy has learned the hard way (see: U.S.S. Cole) even America’s mighty Arleigh-Burke class AEGIS destroyers and other sophisticated surface warships are vulnerable to small boats operating up close. The Navy has in the past tested laser weapons that can shoot down small aerial drones and incapacitate small surface boats. If the Navy can find a laser countermeasure technology that works equally well protecting both its F/A-18 jets and its surface fleet, it would simplify both systems in terms of maintenance and operational know-how.

But keep expectations tempered. If there’s anything we know about laser weapons it’s that they’re finicky, fragile, and affected by just about everything from the weather to water (and the Navy operates in some very wet and weather-y places). The tests slated for 2014 are ground tests only, and its likely to be awhile before we see laser defenses deployed on operational aircraft. On the bright side, by the time DARPA has HELLADS ready for the battle theater the F-35 Joint Strike Fighter might actually be ready to carry it.