Just as the US did with the AEGIS and Zumwalt class cruisers and destroyers, modern naval engineering in China starts... 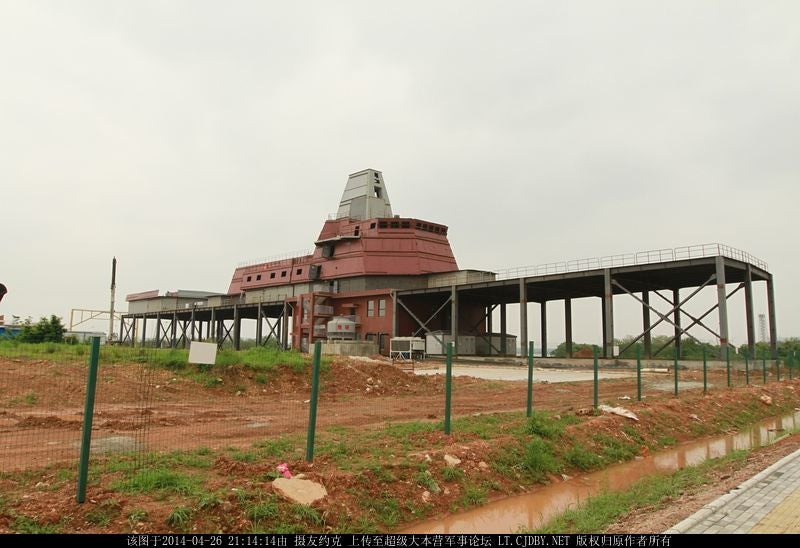 Just as the US did with the AEGIS and Zumwalt class cruisers and destroyers, modern naval engineering in China starts by first building full scale, land based mock ups of advanced warships. The rationale is that they provide a cheaper and less risky alternative to rushing directly into ship construction; it is far easier to measure, modify and fine tune a land based system as opposed to a seagoing prototype hull.

The USS Rancocas is a full scale and functioning Arleigh Burke bridge module, complete with radar and communications, located at the U.S. Navy Combat Systems Engineering site in New Jersey. The 055 Cruise mockup at Wuhan, China, will become a radar and electronics testing facility similar in function to the USS Rancocas. 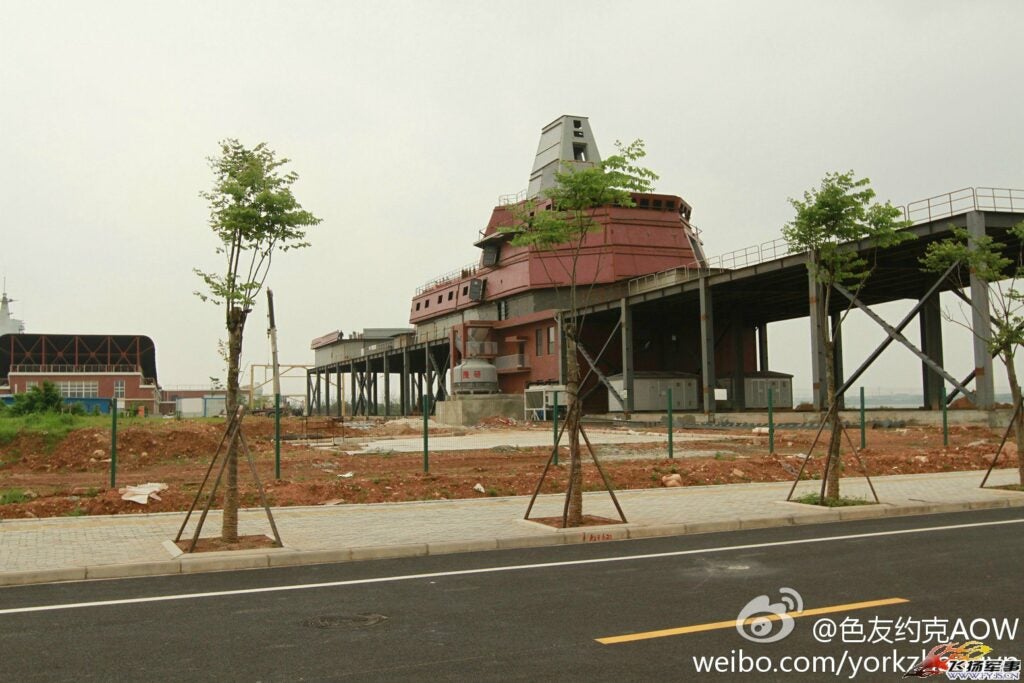 New additions to the 055 electronics test site include a integrated mast, bridge deck, and most importantly, a portside opening (reader’s right) under the right of the bridge for installing a powerful Type 346 radar.

New photos of the work ongoing outside of Wuhan, China, show that the engineers and scientists of the People’s Liberation Army Navy (PLAN) are making fast progress in completing the 055 guided missile cruiser’s (CG) electronics testing mockup that EasternArsenal explored a few weeks back. More recent photos show that the bridge has been added onto the superstructure. These photos also appear to show other features. The main feature of the 055 CG is its Type 346 series of radars, of which four are to be mounted on the forward superstructure around the bridge. Currently, only one opening has been cut for the forward port (left) Type 346 under the bridge; the other forward Type 346 will be mounted on the forward starboard (right). It is expected that the two rear Type 346 radars will be installed at a higher level, on the panels right behind the bridge. The Type 346 radar family operates in the S band to conduct 3D surveillance and fire control at long distance, which is ideal for missile defense and tracking stealthy targets. Once completed, this mockup will resemble the USS Rancocas, an onshore U.S. Navy test site for the Arleigh Burke class destroyers. 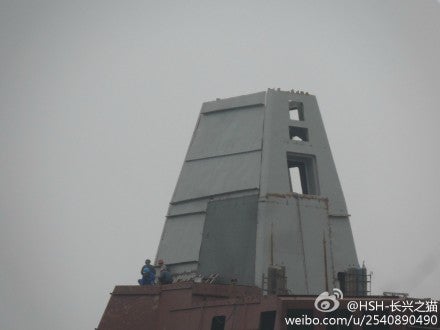 The integrated mast on top of the 055 cruiser mockup has openings on its forward side for the installation of X band radars, communications and electronics countermeasures. 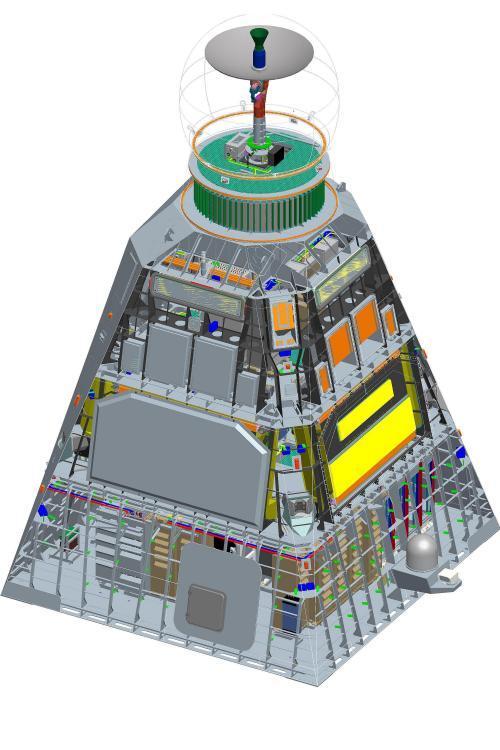 French defense contractor Thales offer the I-Mast, an integrated mast containing radar, communications, jamming and signalling equipment all inside to allow for better stealth characteristics than conventional masts. The I-Mast provides us with an idea of the complexity of systems engineering that China is mastering for the 055 cruiser.

The newest photos also show that the integrated mast (the grey colored tower on top of the superstructure) is taking shape. The integrated mast above the bridge will hold smaller but equally important radar, in addition to communications and electronic jamming equipment. Compared to traditional masts, integrated masts are stealthier by enclosing all the antennas and supporting structures. While not as large as the Type 346 radars, the X band radar mounted in the middle of the integrated mast offers better resolution than the Type 346, which is important for target identification and discrimination (i.e. identifying fighter aircraft against decoys and jamming). Other openings in the integrated mast would likely house arrays for communication antennas and electronic jamming. These new photos reinforce the importance of the program. The 055 CG is expected to replace PLAN Type 052D destroyer as China’s main combatant surface, with at probably twice as many missile launchers (128 vs. 64). The 055 CG will play a major part in China’s naval strategy starting with a projected entry into service of 2017-2020. Its large size, formidable armament and powerful sensors will match or exceed that any current U.S. or allied AEGIS warship in the Pacific; just sailing a 055 CG in the waters of the South China Sea or Taiwan Straits would make a powerful statement. In wartime, the 055 CG could provide a surface escort for China’s growing carrier and amphibious forces, conduct long range cruise missile strikes, or play an air defense role, with its new systems designed to shoot down stealthy bombers and drones. 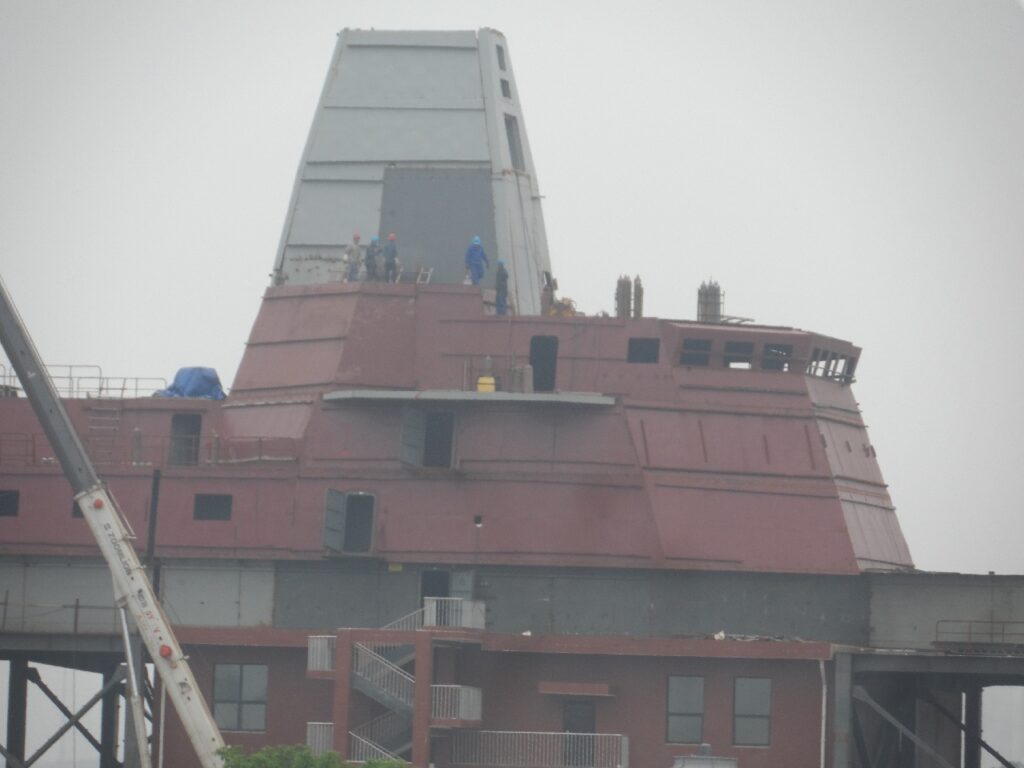 A starboard side view of the 055 cruiser mockup indicates that the giant Type 346 radars will be mounted on the flat surfaces that are respectively below the right wing of the bridge deck, and on the elevated panel right behind the integrated mast (the Arleigh Burke destroyers uses a similar arrangement for its SPY-1 radars). The Type 346 radar is at least twice the size of the SPY-1.

The Next New Major Chinese Warship Arrives, On Land