Inside The Zumwalt Destroyer

The U.S. Navy's most futuristic warship finally hits the water. 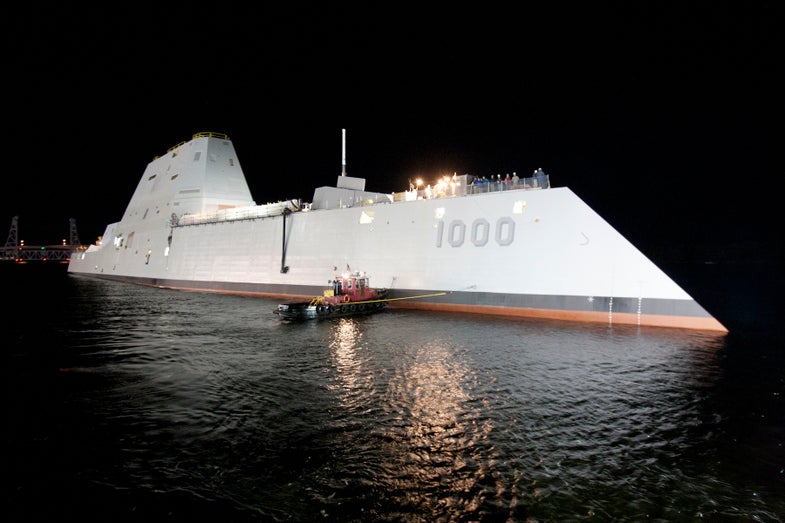 The U.S. Navy’s Zumwalt destroyer, the most technologically advanced warship ever built and the first of its eponymous class, was set to be christened October 19, but then politics intervened. Late last month, the U.S. Navy finally launched the Zumwalt from a shipyard in Maine (though without a baptismal spray of champagne). Popular Science reported on the Zumwalt’s incredible strength and stealth last year; check out the details, including how the warship might have changed the course of a historic Korean War battle, in our October 2012 cover story.

I went to Raytheon’s Seapower Capability Center in Portsmouth, RI, to get a look inside the futuristic destroyer. The Zumwalt isn’t there; it’s waiting at Bath Iron Works in Maine. Instead, I’m here to see a mock-up of the bridge, the command center where sailors send and receive communications, plot courses, direct weapons, and generally see to the operations of the ship. 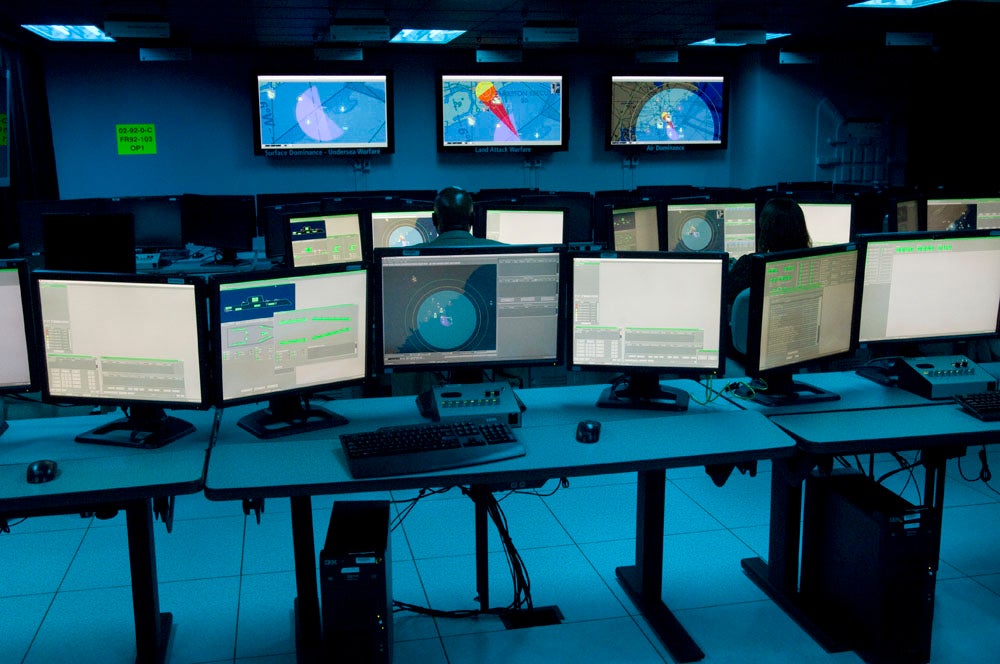 Apart from the metal staircase on the left side, at first glance the bridge could be mistaken for a modern office of a graphic design firm. Rows of computer stations, each with three monitors, all face toward three large projections of the Zumwalt’s location—in this demonstration, the ship is parked off the coast of South Carolina, vigilantly guarding Fort Sumter.

Besides the usual keyboard, trackball, and touchscreen, each computer station has a joystick. A Raytheon employee told me the joysticks aren’t yet mapped to any function, but they could be configured to pilot drones. Poking around the central screen at one of the stations configured for weapons, I found a display map, flight paths, and a series of concentric circles representing incoming vehicles: gray for initiating contact, yellow for warning, and red for opening fire. More information about specific systems (the weapons used, sensors, engines) appears on the side monitors.

And that’s the bridge. Nineteen sailors per shift will control the ship from here, and computers will do the rest. The Zumwalt is expected to have a crew of only 154, about half that of the Arleigh Burke-class destroyers currently in service. What makes this possible is a tremendous degree of automation. Everything, from the valves leading to the showers to the turrets for the guns, is hooked into what’s called the Total Ship Computing Environment. (My guides frowned upon Star Trek comparisons.) Rather than feeding the raw data from a pressure sensor in a pipe back to an engineer, the relevant computer responds accordingly, and then informs the crew member watching the pipes that the change happened.

Crew members will live relatively well. At the lowest rank, there will be four sailors per stateroom (and bathroom). The ship design calls for libraries and lounges, and there’s additional sleeping space and room for other military personnel the Zumwalt might want to take aboard for special purposes. More on that later. 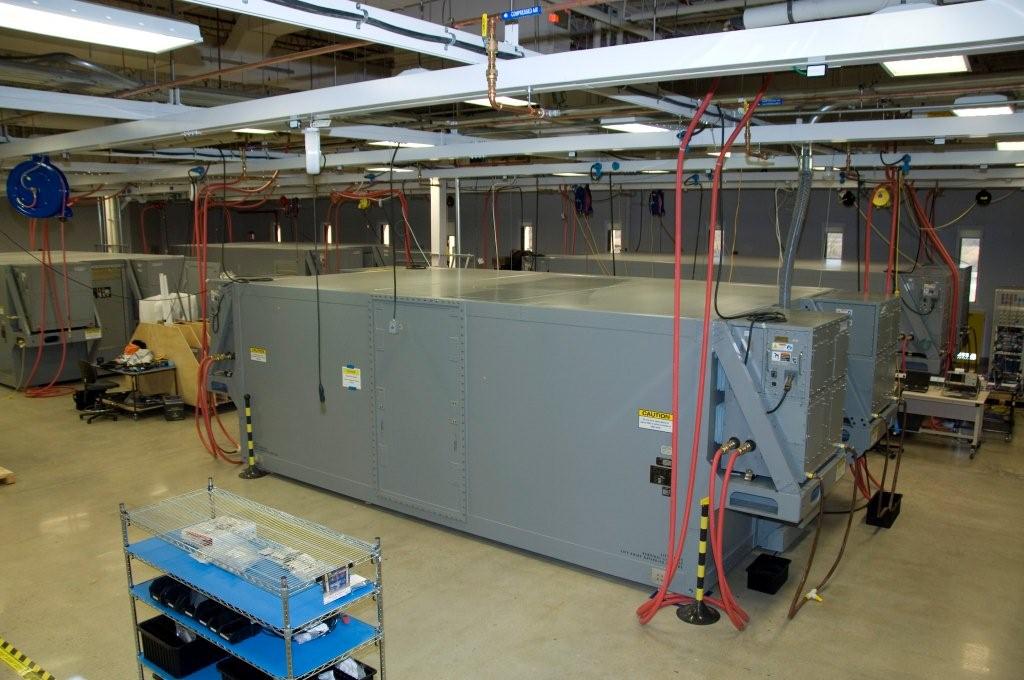 The Brains Of The Zumwalt

All this computing power comes from large boxes (see image above) called Electronic Modular Enclosures. Each of the 16 on board the Zumwalt contains 235 electronics cabinets, consolidating a lot of computer systems into a larger module that’s protected from the rigors of life at sea. Inside the enclosures are many parts available to commercial businesses, like IBM Blade servers, which are much cheaper and easier to replace than rugged equipment specially made for naval use. Navy vessels are expected to serve for decades, but computer technology moves much much faster than that. To upgrade the electronics on the Zumwalt, individual modular enclosures can be pulled out, replaced by more modern parts, and reinstalled with much less fuss than renovation usually entails.

The ship’s electricity comes from gas-powered turbines, which together generate up to 78 megawatts of power. Under normal conditions, the operating systems of the ship and the engines use only 20 of those megawatts, so the ship has 58 left over for weapons. Especially future weapons: Railguns and lasers, both long in development for the Navy, could find a home on board the Zumwalt, which has more than enough electricity to meet these weapons’ intense energy demands. 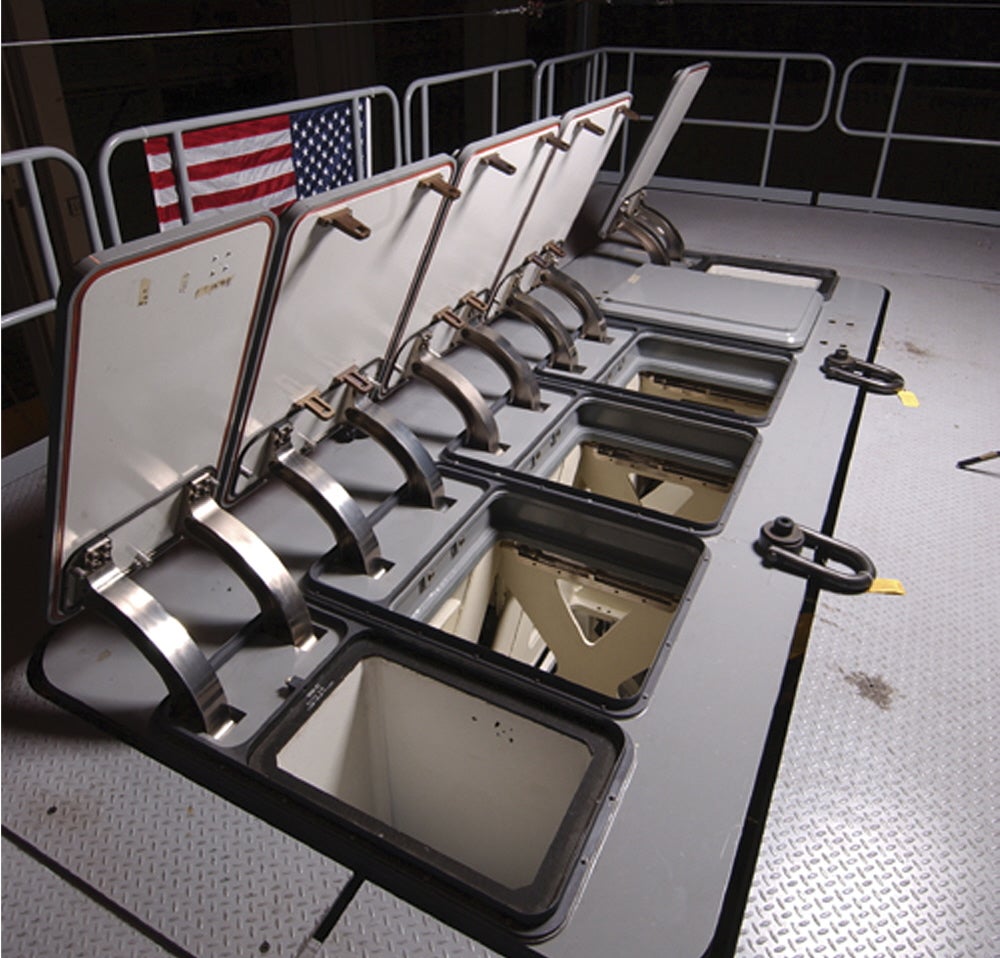 Of course, future weapons alone do not a warship make. The Zumwalt will enter service armed with two long-range guns that fire guided artillery shells up to 72 miles away, two smaller guns to protect the Zumwalt from ships that get too close, and 80 different missile launch points, grouped in 20 sets of four. You can read more about the Zumwalt’s weapon systems in our October 2012 feature.

It shows up on radar as nothing larger than a small fishing vessel.

Having the weapons to hit something is, at most, half the battle. Stealth is just as important. The Zumwalt’s weird construction—sharp edges and sloping surfaces—mean that, according to Raytheon, it shows up on radar as nothing larger than a “small fishing vessel,” despite being 610 feet long and displacing 15,000 tons of water. It has both the medium-frequency sonar typical of surface ships and the high-frequency sonar common in submarines. The onboard radar can simultaneously perform broad sweeps and narrow scanning. There’s also a system of electronic eyes that catch both visual and infrared light and then analyze the images to determine if anything seen is a threat and warrants notifying a sailor on watch.

Besides the tools for naval battle, the Zumwalt has a helipad big enough for either two helicopters or a helicopter and a vertical-takeoff drone. There’s enough room on the Zumwalt to house two helicopter or drone crews, as well as room for two helicopters’ worth of special forces, if need be. The V-22 Osprey, while a staple of vertical takeoff and tricky deployments, is too large and heavy for the Zumwalt’s landing pad, but for most purposes, helicopters will be fine. Thanks to the ship’s sensors, defenses, and stealth, it might very well get special forces into otherwise difficult-to-reach places. 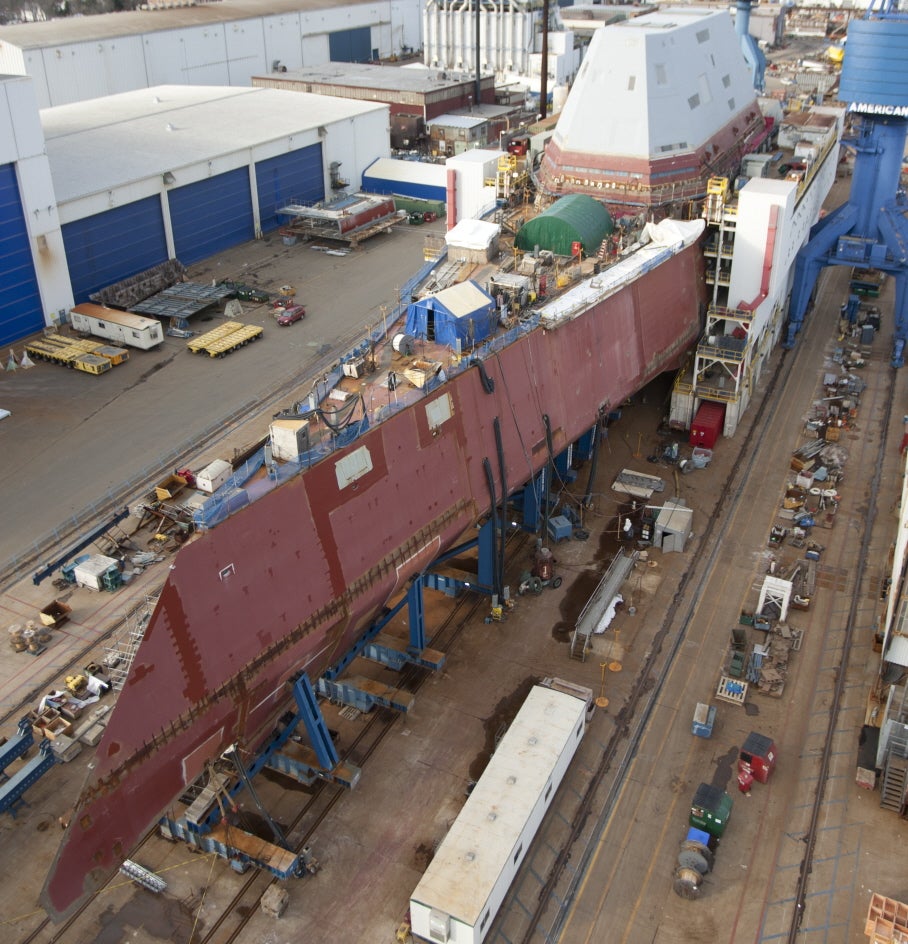 Star Trek Into Darkness, released this summer, features a warship called the Dreadnought that’s heavily automated and designed to run on a very minimal crew. When, toward the end of my visit, I asked my hosts at Raytheon what they thought of this comparison, I was met with a hearty chorus of “no comment.”

The U.S. Navy, on the other hand, seems ready for the science fiction comparisons. It looks like the first commander of the Zumwalt will be Captain James Kirk.