A Terrible Thing That Waits (Under the Ocean) 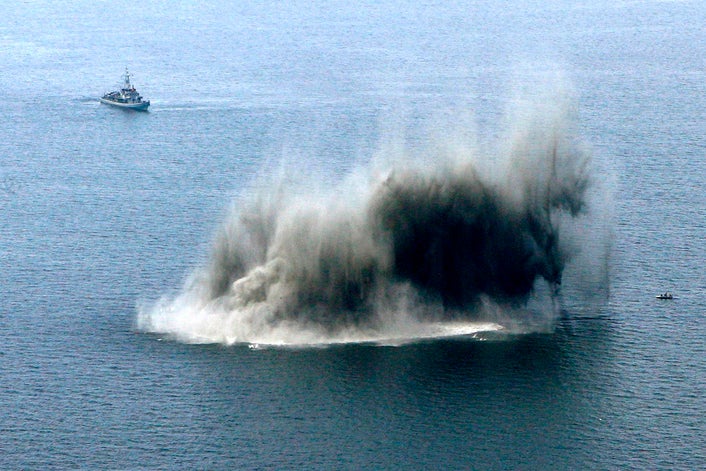 There’s a line in the mine warfare community twisted from the United Negro College Fund slogan and gets (over) used all the time:
“A mine is a terrible thing that waits.”

In the lead-up to the cancelled invasion of the home islands of Japan in World War II, the U.S. Navy dumped close to 25,000 mines in the water as part of 1945’s Operation Starvation. Hundreds remained in the water long afterwards were still around decades later, still dangerous.

What makes sea mines so insidious is the mine designers cracked the overarching technical problem of keeping the mines effective after they’ve been in the ocean for years.

The most basic type of sea mine is detonated when a ship brushes up against the side and causes an electrical circuit to be completed that activates the explosive.

Saltwater is rough on just about everything and corrosion quickly made the first mechanical circuits ineffective after not very long.

In the 1870s the contact longevity problem got solved with the Hertz Horn.

The horn contained a vial of conductive liquid. When the vial broke — when say a ship hull brushed against the horn — it would complete the circuit and then kaboom.

You just don’t have to bump into a mine to set it off.

These are mines with a variety of sensors that can activate a mine as a ship passes overhead.

Some are wired to hydrophones that trip to the sound of a certain type of engine, some can feel seismic foundations in the water and trip from the vibration.

Some mines can detect just the magnetic field of a ship passing by and trip the mine.

The U.S. Navy spends a lot of time in particular thinking about that type of influence mine.

In 2011, I took a trip to San Diego and visited the Avenger-class mine counter measure (MCM) ships at MCM Squadron 2.

(The MCM fleet is among the historically neglected parts of the U.S. Navy. While most of the surface force dreams of tearing across the Pacific shooting airplanes and satellites out of the sky with missiles in sleek modern warships, the MCM fleet tools around in some of the oldest and unglamorous ships in the service.)

On a tour I noticed red round stickers on televisions, laptops and the odd PlayStation.

I asked what the deal was with the dots?

The MCM guys — who drive wooden ships (actual wooden ships with hulls coated in fiberglass) — are very sensitive about anything that gives off any type of magnetic signature that’s not essential to the operation of the ship (televisions, laptops and the odd PlayStation).

In the event that the MCM ship accidentally finds itself in a minefield the stray electronics go over the side, necessitating careful consideration of extra stuff that goes on the ships.

“We’re big readers,” said the lieutenant who was showing me around.

So if the Navy’s minesweepers have a negligible magnetic signature — and the crew is ready to make it smaller through jettisoning consumer electronics — what do the big steel ships twice the size do to keep their magnetic influence down?

U.S. ships have a degaussing system installed that minimize the affect the ship has on the surrounding magnetic field.

“The change in the Earth’s field about the ship’s hull is ‘canceled’ by controlling the electric current flowing through degaussing coils wound in specific locations within the hull,” according to this useful naval document.

“This, in turn, reduces the possibility of detection by these magnetic sensitive ordnance or devices.”

Ships also get wrapped in stout electrical cables to provide a more permanent affect on the ship.

It’s an intense procedure that takes almost a week.

Here’s a taste when the amphibious warship USS New Orleans underwent the procedure in 2011.

“The crew spent the four days wrapping the ship with 96 cables. All hands were involved in long days of pulling cables from the pier to the flight deck, mid ships, and foc’sle, then again from the water side of the ship with assistance from Navy divers,” according to a cheery press release.
“The ship then underwent the deperming (energized cable portion) treatment for one day, and then took two more days to unwrap the ship. The process is extremely delicate due the immense amount of electrical current going through the ship.”

The U.S. Navy has special rigs for submarines to undergo the same process.

Still, all the preparation doesn’t mean the worst won’t happen. Just ask the crew of USS Samuel B. Roberts.

In 1988 the frigate hit a mine escorting tankers through the Persian Gulf against the backdrop of the Iran-Iraq War.

The M-08 moored Soviet mine — laid by the Iranian Navy — almost sank the ship.

The crew was able to tie the ship together and kept fighting in a really remarkable story.
(Day job alert: Bradley Peniston wrote a fantastic book about the story of the Roberts everyone should read from the U.S. Naval Institute Press).