Warships, Glenn Frey and the Gas Stations of the Ocean

The heart of an Arleigh Burke destroyer is a collection of four massive gas turbines that power the ship. Four... 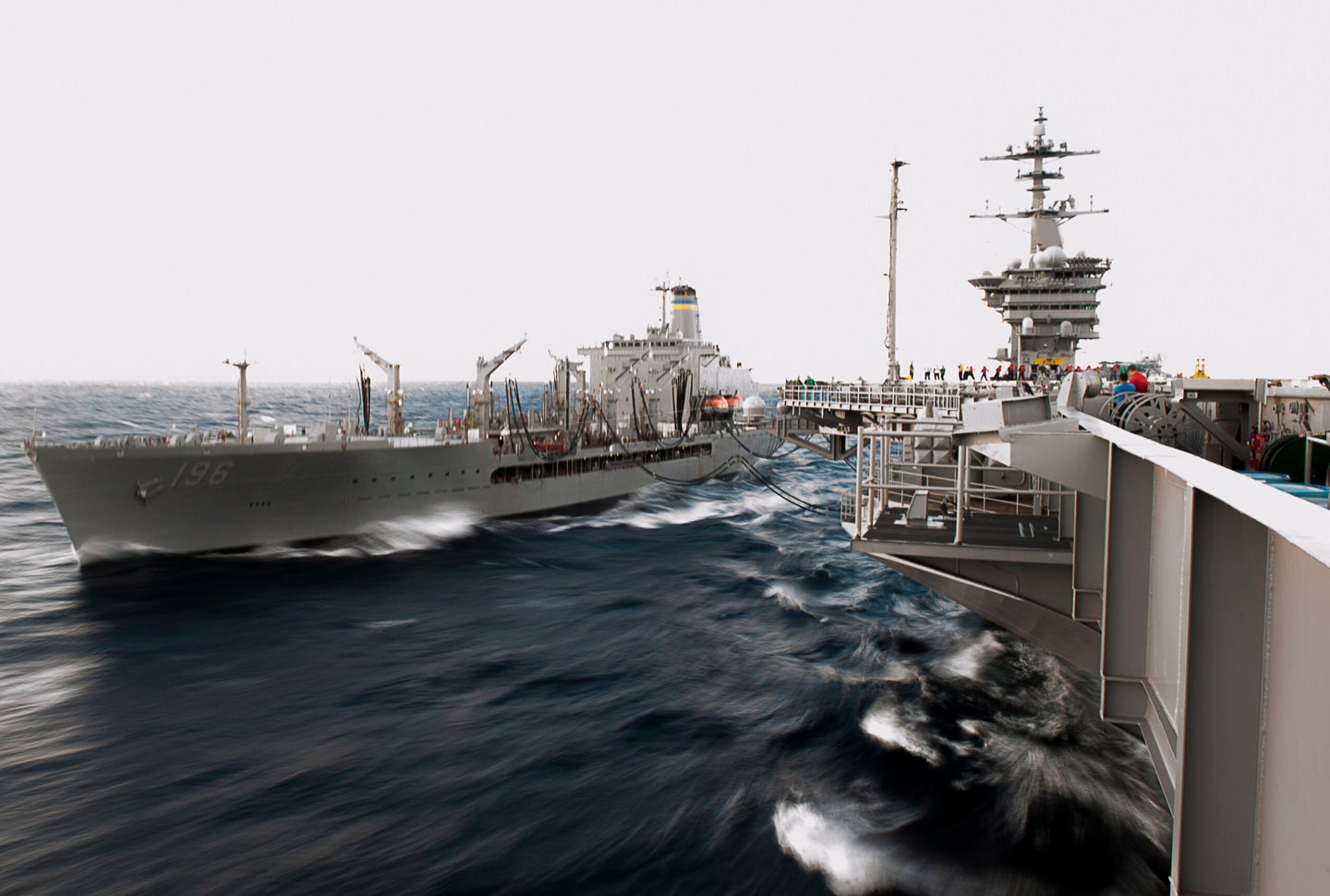 The heart of an Arleigh Burke destroyer is a collection of four massive gas turbines that power the ship.

The four LM 2500 maritime gas turbines ingest large quantities of air, mixes the air with fuel and the escaping gas turns turbines at a very high rate of RPM that energy travels into a large box full of gears called a main reduction gear. The MRG takes the high RPM energy and converts it to lower RPM, higher torque energy to drive the props of the ship.

The gas tank for the LM 2500s and the four generators is measured in the hundreds of thousands of gallons. The logistics of keeping that tank full are a big part of any navy’s thought process.

The end of the age of sail and the adoption of fossil fuels caused a mad international scramble for coaling stops to power the steam boilers because of a pretty simple premise — a ship’s no good if its out of gas (coal, diesel or a blend of biofuels).

“A fleet of battleships is powerful only when its constant mobility is assured, when we are able to guarantee the free and unrestricted movement of that fleet to a given theater of war, and within that area after it has arrived,” wrote Navy Cross winner Rear Adm. Carl Theodore Vogelgesang in his 1913 article_ Logistics — Its Bearing Upon the Art of War_ in the U.S. Naval Institute Proceedings when he was the number two aboard battleship USS Wyoming.
“Fleets must not be starved, lest they fail to fulfill any function and become derelict.”

(Disclosure: I work at the U.S. Naval Institute for my day job).

The logistics ships that loaded the coal underway were called colliers — from the Middle English word meaning a person who sold or dug coal.

The first real recorded underway replenishment (UNREP) was in 1899 between USS Marcellus and battleship USS Massachusetts.

Moving at about 6 knots — slightly slower than you’re allowed to drive in an elementary school parking lot — Massachusetts towed Marcellus taking on coal 84 pounds at a time.

Useful, but it took too long. Most ships relied on coaling stations like this one in Hawaii.

Following the deployment of The Great White Fleet and the need for the 430,000 pounds of coal to keep the fleet moving, Congress doubled down on supply ships.

“Funds were appropriated in 1908 to build two fleet colliers and purchase three merchant colliers. The Navy fitted each of the ships with the equipment need for ship-to-ship transfers — which were meant to take place in port,” wrote David F. Winkler in Seapower.

In the 1930s the Germans were the first to develop a more modern mobile refueling station ships could use to gas up underway, Dithmarschen.

(Post World War II the Allies raided the German technology like a Filene’s Basement fire sale. The back of the U.S. space race is built on German rocket technology and German submarine designs accelerated the U.S. and Soviet nuclear attack subs).

Dithmarschen was eventually commissioned into the U.S. fleet in 1956 and renamed USS Conecuh (AO-110) and became an American oiler when post World War II budgets went way down.

While the U.S. island hopped in the Pacific, they were able to UNREP underway, but it was a complicated process and took time.

During the last 35 days of combat in World War II, “Fast Carrier Task Force 38 spent 11 days replenishing, 13 days sailing to an UNREP rendezvous and then sailing to the next combat position; leaving only 11 days for striking targets on the Japanese homeland,” according to a Naval Sea Systems Command report.

In 1957, borrowing a lot from the Germans, the U.S. developed a sophisticated method for refueling ships undersea.

Modern oilers can truck along at about 20 knots next to their ships and pass along food, ammunition and most importantly fuel for the gas turbines and the aircraft onboard.

(ShipShape’s background photo is an UNREP for aircraft carrier USS Ronald Reagan in 2010).

This video does a great job of wrapping up the process.

After the tanks are full, ships breakaway and haul at their fastest speed.

Leading to a relatively new tradition, the breakaway song.

At the skipper’s discretion, the ship’s speakers blare a motivational tune for the crew.

I’ve surveyed sailors and the tracks are what you’d expect, hard rocking and lean toward AC/DC, Rolling Stones, Ozzy Osburne. There’s a story in which oiler USS Mispillion blasted Joni Mitchell’s California on the way back home in the 1970s.

(Former Supreme Allied Commander, retired Adm. James Stavridis, when he was in command of destroyer USS Barry used the Glenn Frey hit The Heat is On, articulated in his book _Destroyer Captain _ (a Naval Institute book)).