FYI: What Kind Of Gas Mileage Can You Get From A Naval Warship?

A hulking Arleigh Burke–class destroyer might typically burn a minimum of about 24 barrels (1,000 gallons) of fuel per hour,... 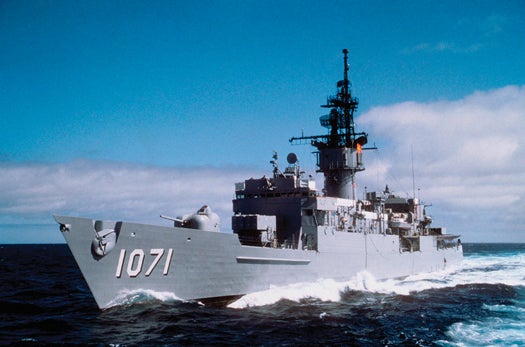 A hulking Arleigh Burke–class destroyer might typically burn a minimum of about 24 barrels (1,000 gallons) of fuel per hour, but this figure conceals so many factors and variables that the Navy doesn’t really use it the way we use “miles per gallon.” Wind and current can have a major effect on a ship’s efficiency. Speed affects a ship’s mileage in unique ways, too, says Gabor Karafiath, with the Naval Surface Warfare Center in Bethesda, Maryland. When a ship moves quickly, he says, “it takes an inordinately greater effort to push it through the water because it makes bigger and bigger waves.”

Other subtleties arise from a ship’s engine setup. Arleigh Burke–class destroyers are fitted with four gas turbine propulsion engines (which are most efficient at high RPMs), so depending on the speed required, one engine going full tilt is more efficient than splitting the work across two engines. The USS Chafee burned similar amounts of propulsion fuel overall in May and July 2010, but in July its efficiency turned out to be 72 percent higher; that month the ship operated mostly with one engine cranking at maximum capacity versus using multiple engines running at lower ones.

tl;dr: With ships, there’s no such thing as “highway” and “city” mileage.

Ask Us Anything
Military
Navy