Why send truck-sized rovers when you can send nanobots? 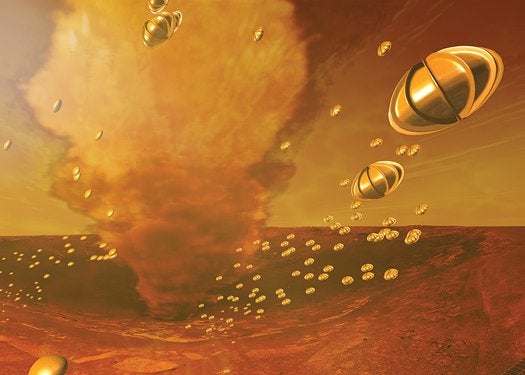 NASA’s Mars rover Curiosity, scheduled to reach the red planet this Sunday, is the size of an SUV for good reason: It’s built to carry 165 pounds of scientific instruments over boulders and into gullies. But putting Hummer-size robots on other planets is not altogether practical. For one, it’s expensive. (Getting a Curiosity-weight rover to Mars takes more than a million pounds of fuel.) Large rovers are also power-hungry and limited in range. For future missions, some researchers, eager to do more science with fewer resources, have begun looking to nanobots—each one about one-one-billionth as big as Curiosity.

The first nanobots to reach Mars could arrive as a cloud of “smart dust”—sand-grain-size robots that travel like a sand storm, using the Martian wind for propulsion. An orbiting spacecraft would drop a capsule of the dust motes onto the planet. From there, they would take advantage of Mars’s low gravity (38 percent of Earth’s) to ride the thin Martian winds. John Barker, a physicist at the University of Glasgow, says that according to his computer simulations, one release of 30,000 robots could cover thousands of square miles. Each robot would contain a nanoprocessor, an antenna for communicating with neighboring motes, a sensor for collecting data and an electrode-controlled shape-shifting polymer shell. Once on the ground, the motes would decide which would change from a smooth exterior to a dimpled silhouette that creates drag to help them catch the wind and travel. The motes would use their sensors to collect data about Mars’s air currents and chemical composition and then communicate this information to the orbiter, which would relay that data back to Earth. The project might sound impossibly complex, but shape-shifting polymers already exist in the lab, and Barker has started testing the most challenging part of the concept—the communications array—with centimeter-size prototypes. 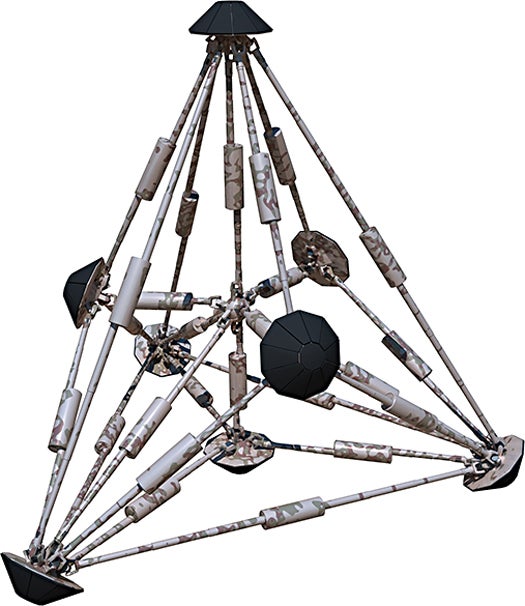 Tiny walking robots could gather information about Mars and other planets.

One engineer is working on what amounts to a nanobot Mars base, which would protect the ‘bots from cosmic radiation.For more complex and directed missions, such as digging under Mars’s surface and collecting samples, robots will have to move autonomously and under their own power. Researchers at NASA’s ANTS (Autonomous Nanotechnological Swarm) program have been developing concepts for tiny robots, called TETwalkers, capable of doing just that. Each TETwalker would be a tetrahedron of carbon-nanotube struts connected by joints. Each individual robot could move by lengthening or shortening its struts, thereby shifting its center of gravity until it tumbles in the desired direction. Together, tens of thousands of nanoscale TETwalkers could connect together to form devices such as rovers and antennas, which could travel the planet in search of signs of life and water. So far, engineers have built a two-foot-high proof-of-concept that moves in response to human commands. To shrink this prototype to nanoscale, scientists need advanced nanotubes that can both move themselves and rearrange themselves to form different kinds of materials. Program head Steve Curtis says that depending on the speed of nanotech development and funding levels, TETwalkers could land on Mars within the next 30 to 40 years.

Without shelter, any Mars-dwelling robot will eventually succumb to the planet’s intense cosmic radiation and extreme weather. To enable nanobots to carry out long-term missions, Constantinos Mavroidis, an engineer at Northeastern University, is working on a theoretical plan for what amounts to a nanobot Mars base. Mavroidis calls this miles-long spiderweb of nanotube tunnels the Networked TerraXplorer concept. An orbiter would drop the TerraXplorer, preloaded with nanobots, onto the Martian surface. Once in place, the protected nanobots could make long-term measurements of the planet’s weather and any seismic activity.

Although Mars is likely the first planetary destination for nanobots, scientists could eventually send them to places much more distant and extreme. Researchers at NASA’s Jet Propulsion Laboratory are developing carbon nano­tubes that can survive Venus’s 900°F surface. Others are studying ways to move nanobots through interstellar space. No matter what, in the decades ahead, some of the most stunning revelations about space could come from robots smaller than a toy car.