Interview With A Sarcastic Mars Rover 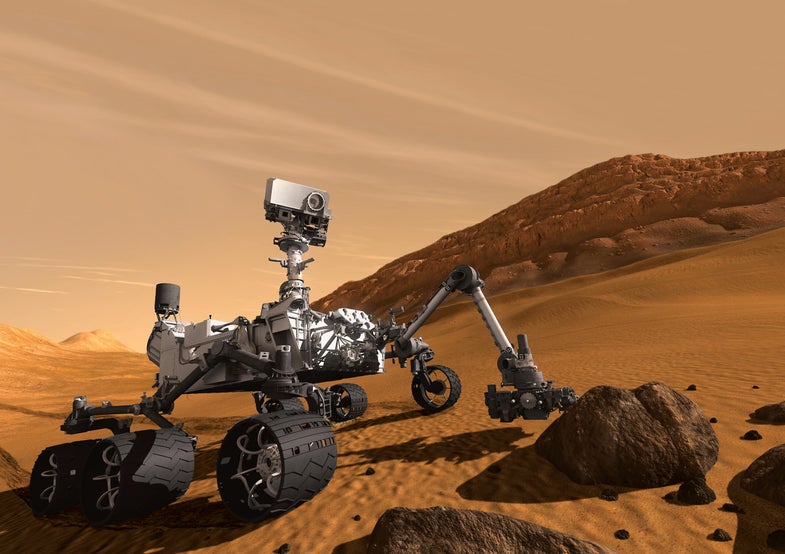 The Curiosity Rover is the most advanced piece of technology ever sent to Mars. It weighs 2,000 pounds and houses a full science laboratory on board. Curiosity landed on Mars on August 5th, 2012, and has been conducting science ever since. Curiosity’s main mission was to determine if Mars was or ever could be a potential place for life. Curiosity is currently on the lower slopes of Mt. Sharp, drilling and examining rocks along the way.

In its abundant spare time, the rover has been tweeting interplanetary snark from the @SarcasticRover Twitter account. On Sol 1128, Sarcastic Rover took a break from her science job to talk to us about Martian life and what it’s like ‘doing a science’ on the Red Planet.

NOTE: Sarcastic Rover is a hilarious Twitter account run by a human on Earth and is not affiliated with NASA.

Is there life on Mars?

There is no life on Mars. Trust me. I’m here, and I have no life.

What’s the worst thing about Mars?

The worst thing about Mars is how lonely it is, and also how many ghosts there are, and also how the crippling loneliness can make you imagine that there are ghosts everywhere. It’s a confusing place. Oh! And also the wifi is not very good. Worst, right?

Is Pluto a planet?

It’s a well-known fact among robots that Pluto is actually one of those BB-8 Sphero toys, which has become sentient and massive. Like the toy, Pluto is very costly and hard to find and your dog will be scared of it.

Best spacecraft of all time?

Have you seen The Martian yet?

There’s only one movie theatre on Mars, and I’m banned from it – so no, I have not seen ‘The Martian’ yet. I did read the book, and I thought it was hilarious. Until the end.

Why didn’t you help out Matt Damon/Mark Watney when he was stuck there?

Primarily because he’s a fictional character, and also the better question is why none of the previous Ares missions bothered to come help ME out.

Humans are due to land on Mars sometime in the 2030s. Ready for company?

I’ve told them that Mars is BYOB, so I’m as ready as I need to be.

Every other day that doesn’t involve tacos.

Tacos. (I should also point out that I’m programmed to think rocks are tacos)

As long as he gets me off the planet first, I’m all for it.

Is Tinder as bad on Mars as it is on Earth?

Mars Tinder is pretty much exactly the same as Earth Tinder – except it’s full of rocks and ghosts and robots and also it doesn’t exist.

You break a lot of rocks, why?

I break rocks for the same reason people break hearts. I’m looking for something special.

Your budget is due to run out in 2016. Do you ever worry about being out of a job?

I think these are tough economic times and the government will always have a hard time justifying the expenditure of real dollars on extra-planetary research when there is actual need and suffering on Earth. So, while I wouldn’t welcome a reduction or cut in my operating budget, I think there are a lot of legitimate uses for government funds, and only a finite amount of money to go around.

Sorry, I forget what the question was. Something about space poop?

Does it bother you that you weren’t the one to discover liquid water on Mars?

Liquid water is a dangerous thing. It houses gross bacteria, it causes mold, it rots things, it leads to boating and boat accidents, it’s like, the number one cause of drowning… I’m actually pretty glad I missed out on that whole discovery.

For a robot you’ve got a pretty snarky personality, is that a defect or a feature in your programming?

It’s a defense mechanism. Like a laser or a bad hat.

Is there a lot of downtime on Mars? You seem to find a lot of time for Twitter.

Mars has an extra 40 minutes in a day, so I use those minutes for all my Tweeting and also get off my back.

You were the first to use the selfie-stick on Mars, where do you think that falls on your list of accomplishments?

I think taking a selfie on Mars is PROBABLY the greatest accomplishment of the 21st century. It’s all downhill from here.

Do you have a message for the humans back at JPL who sent you to Mars?

Sure. Tell them I said, “I found the wreckage of that secret crewed mission to Mars from 1984 where everyone was mysteriously murdered by future versions of themselves, and if someone doesn’t come get me soon I will tell the whole world about it.”

Sarcastic Rover’s human typist is Jason Filiatrault, a Canadian screenwriter. Jason started the Sarcastic Rover Twitter account after watching the Mars Science laboratory land on Mars in 2012. As the ‘seven minutes of terror‘ was taking place, Jason wondered what it would be like if he was left alone on Mars and wasn’t too happy about the thought.