Is A Mysterious Millionaire Planning A Manned Mission To Mars And Back?

Stay tuned for details next week about the proposed launch in 2018. 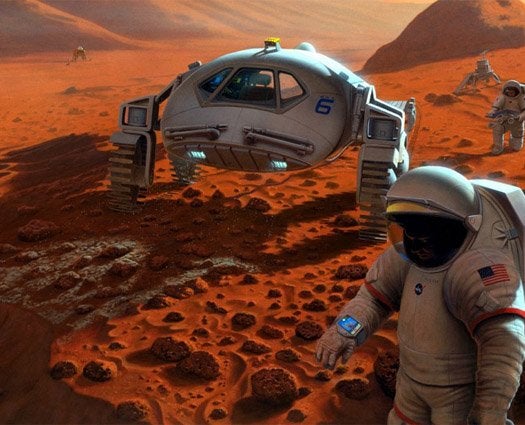 The Mars rover Curiosity is already expecting a robotic pal in 2020–but could humans make it there first? A new mysterious nonprofit organization called the Inspiration Mars Foundation is holding a press conference next week to announce a round trip to the Red Planet. The “Mission For America” would launch in January 2018, and go to Mars and back in 501 days.

“It is intended to encourage all Americans to believe again, in doing the hard things that make our nation great, while inspiring youth through science, technology, engineering and mathematics education and motivation,” the announcement reads. “The Inspiration Mars Foundation is committed to accelerating America’s human exploration of space as a critical catalyst for future growth, national prosperity, new knowledge and global leadership.”

It’s funded by millionaire and space tourism pioneer Dennis Tito, who became the first private tourist in space back in 2001. Tito worked on Mars missions for NASA during the 1960s. Full details will be announced at a press conference Feb. 27 at the National Press Club in Washington, D.C.

The mission would launch in 2018 to take advantage of a convenient alignment between Earth and Mars, which happens roughly every two years plus two months. The next one is in November of this year, followed by early 2016. During these events, the planets’ orbital alignments are situated so an Earth-departing spacecraft would require less energy to make the 350-million-mile-plus journey. The Mars rover Curiosity, for instance, took 253 days from Nov. 26, 2011 to Aug. 6, 2012 to cover 352 million miles.

Over at NBC’s Cosmic Log, Alan Boyle (no relation) digs up some information from a forthcoming presentation by Tito at the IEEE Aerospace Conference next month. Apparently the plan is for two astronauts to ride in a modified SpaceX Dragon capsule, swinging past Mars and coming right back by using the planets’ alignment for a free trajectory home. So no landing appears in the cards.

This isn’t really surprising, because staying in Mars orbit–or just flying by–would be far simpler, safer and cheaper than dropping cargo. Delivering the car-sized Curiosity rover onto the surface was an enormous technological feat, but doesn’t even approach the challenge of safely delivering (and retrieving!) human visitors.

The trip there and back is actually pretty feasible, however. European Space Agency and Russian Roscosmos agency already tested what it would be like to live in closed quarters for that long–albeit with Earth’s gravity, so it wasn’t a totally realistic simulation. But the Mars500 experiment showed it’s possible to live in tight quarters with only a few people for nearly a year and a half.

Still, major as-yet-unaddressed challenges would be protecting the astronauts from solar and cosmic radiation, and building a rocket and spaceship that could get them safely there and back.

We expect several more details at the announcement next week–stay tuned.