What’s Next For The Dawn Mission? 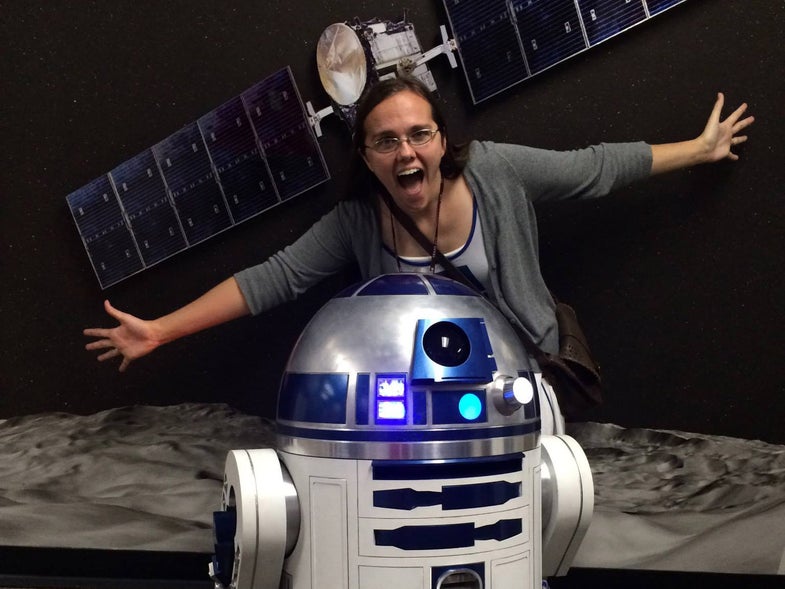 Her online alias is Planetary Keri, but in real life she goes by the name of Keri Bean. An engineer for NASA’s Dawn mission, Bean has won the hearts of her Twitter followers who rely on her regular science-themed tweets to keep them informed. Before becoming a part of the Dawn team, Keri worked on several well-known missions including the Hubble Space Telescope, the Opportunity rover, and the MSL or Curiosity rover. A space meteorologist by trade, Keri now writes the code that tells the Dawn spacecraft when and how to collect science data.

Dawn arrived at Ceres on March 6 and became the first spacecraft to enter orbit around a dwarf planet, marking an historical accomplishment for space exploration. Now that Dawn is at its final destination, it’s time for the science portion to commence. Keri took a break from entering robots into orbit to chat with us about space, what’s next for the Dawn mission and how she became best friends with R2D2.

Popular Science: How did you get the name Planetary Keri?

Keri Bean: When I worked on the Mars Science Laboratory [a.k.a, the Curiosity rover], my Twitter handle was “Keri on Mars” and when I found out that I would be working on Dawn, I figured that wouldn’t work anymore. So I came up with Planetary Keri; I liked that it rhymed and wasn’t planet-specific.

You’re an atmospheric scientist by training. Did you always know you wanted to be a scientist?

I grew up loving meteorology and pretty much only watched the Weather Channel or The Little Mermaid. I wasn’t really interested in space until high school. I struggled with how to reconcile this newfound love for space and my love for meteorology and the weather. It wasn’t until I was about to enter college when I was introduced to a professor whose job was to study the weather on Mars. I couldn’t believe that was a thing people could study! That was it for me; it was the perfect marriage of space and meteorology.

Can you talk about your role in the Dawn mission?

I’m a member of the science operations support team. Between all of us we figure out what data the scientists need to do their work and then plan how to retrieve that data and get as much information as possible.

You’re in charge of the first Ceres orbit phase. Can you explain what that means?

I’m working closely with the instrument teams to write all of the code that will go to the spacecraft [to tell it what to do] and get all of the science back. Basically I’m figuring out all of the little details of what’s going to happen and when. I also do things like run the sequences through the test bed. We have a rack of computers here that simulate Dawn. It’s much easier to fix things there before we send them to the spacecraft.

What are you most excited about as you begin this phase of the mission?

Ceres is the biggest object in our solar system that we have yet to really explore. It was discovered and made a planet, then demoted to asteroid before Pluto was even discovered. We’ve known about it for a couple of centuries now and yet the only sense of it we had were the fuzzy pictures Hubble took in 2004. Now we’re getting much better data and it’s only going to improve. It’s going to be really exciting to see what surprises Ceres has in store for us.

Dawn has sort of become the poster child for ion propulsion. Would this particular mission have worked without the use of an ion engine?

“We’re the first mission to really be able to get our hands dirty and explore two different targets in the asteroid belt.”

When do you anticipate running out of fuel?

The xenon fuel we will not run out of before the end of the mission. The constraining fuel will be our hydrazine, which is what our thrusters use to turn and point Dawn. Dawn’s big antenna (called a High Gain Antenna) has to be pointed at Earth for us to be able to talk to Dawn, send it more commands, and stream back more data. We also need hydrazine to be able to turn the instruments to point at Ceres. Once we run out of that hydrazine, we won’t be able to turn Dawn to either talk to us or look at Ceres. At that point, the mission will be over and I will be very sad, but happy because by then we will have had a wonderful mission at Ceres! We expect the hydrazine will run out sometime towards the end of 2016. After that, we will just become an artificial satellite around Ceres, a kind of moon.

At its closest approach, Dawn will be as close to Ceres as the ISS is to Earth, making for some incredible images. What are you expecting to see as we get closer?

The first thing about science is that the only thing we can expect is to be surprised. Everyone’s been talking about the bright spots. They’re just kind of the most prominent feature that we can see right now. So, hopefully we’ll get some more detail about that. Ceres, I’m sure, will have some other surprises in store for us too.

At its closest approach, Dawn will be as close to Ceres as the ISS is to Earth.

What is the biggest question you and the Dawn team are trying to answer?

We’re hoping to get a lot of information out of the mission, like trying to characterize what really makes a dwarf planet. Really we just don’t know much about these bodies. So we’ll spend a lot of time mapping and taking pictures and getting lots of good information to really understand what Ceres and Vesta are made of and how they tie into the “dawn” of our solar system. That’s where Dawn got its name from because we’re really studying the building blocks of our solar system.

Where were you when you first heard the good news that Dawn had been captured by Ceres’ orbit? Did you celebrate?

Yes! I was home that day. To celebrate I ate cereal. The word ‘cereal’ is derived from Ceres so it was appropriate! And since I didn’t have to work that day, I spent my day on social media answering people’s questions about the mission. We’ve put in a lot effort in already, and finally getting there has been really exciting.

You are a big proponent of science outreach. What drives this desire to engage the public in science-driven conversation?

I think it actually stems a lot from my job. I sort of think of the science operations team as translators because we translate between the science team and the engineers. I think it’s very important to also communicate what we’re doing to the public. Space exploration is a human endeavor and it really takes all types. It’s important to bring the public along on the journey with us.

Anyone who follows you on Twitter knows that you might be R2D2’s biggest fan. Why do you love robots? Is it a side effect of working at JPL?

I’m not sure if I love robots because I work at JPL, or if I work at JPL because I love robots. But I’ve always been a fan of robots, especially the sarcastic robots like R2D2. My R2 fandom really kicked off when my friend brought R2D2 to JPL for a visit. Ever since then I’ve been totally obsessed with him. I still have people come up to me and ask, “Are you that girl that brought R2D2 to JPL?” Yes!

What is the coolest part about your job?

I can’t praise JPL enough. It’s really great getting to come to work with some of the most brilliant, dedicated people on the planet, and to work on a collected effort of learning for the sake of learning. Its just super fun getting to work here everyday.