FYI: What Is Sea Foam? Where Does It Come From?

And is it dangerous? 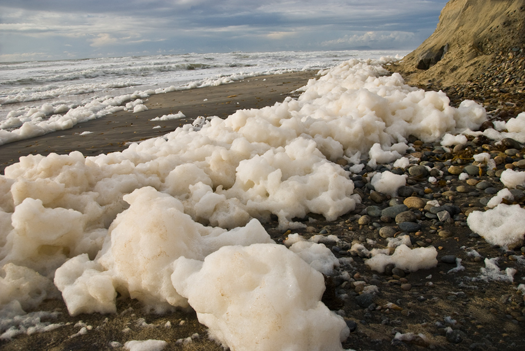 Just a few hours before a tornado touched down in Queens, New York this past September, I was hanging out on a beach in The Rockaways, a narrow peninsula that juts out into the Atlantic just southeast of Brooklyn (though it is technically a part of Queens). The storm hadn’t rolled in yet, but the wind had– little white clouds raced across the sky, sand flew through the air above the beach, and, along the shoreline, huge globs of foam blew off the water and collected on the beach in thick, jiggling blankets of yellowish-white. Foam built up in big, shapeless piles behind rocks, and dollops of the stuff broke free and scampered up the beach like animate loogies.

Never before had I seen this much foam and, given that this was New York City, I wondered if perhaps it was not a natural occurrence. Could grotesque quantities of sea foam form naturally, or was it a sign that the city’s overburdened wastewater system could have, once again, been splurting raw sewage into the ocean?

According to a 2011 paper by several Austrian scientists called “Foam in the Aquatic Environment,” the answer is–somewhat unhelpfully–yes, and yes. In order for foam to form, you need air, water, and a key third ingredient called a “surfactant”–a kind of sticky molecule that clings to the surface between water and air. This surfactant ingredient can come from a lot of places; human-made sources include fertilizers, detergents, paper factories, leather tanneries, and sewage. But surfactants also come from the proteins and fats in algae, seaweed, and other marine plant life.

There are lots of different molecules that can act as surfactants, but they all have one thing in common: one end of the molecule is hydrophilic (attracted to water) while the other end is hydrophobic (repelled by water). When a bunch of surfactant molecules get mixed together with plenty of water and air, they all want to line themselves up right at the boundary, with one end (hydrophilc) facing the water and the other (hydrophobic) facing the air. They’ll even line up back to back, so that the hydrophilic ends are pointed at each other, with a thin layer of water in between. That thin layer of water takes the shape of a sphere, because a sphere requires the least energy of any shape, and voila, it’s a bubble. Things get slightly more complicated when there are many bubbles packed together–as you might have noticed while taking a bubble bath as a kid (or as an adult), foamy bubbles aren’t perfect spheres–but the basic idea is the same. It’s all about the surfactant.

“Foam in the Aquatic Environment” mentions several reports of “unusual quantities” of foam forming near large algal blooms. “Great amounts of carbohydrates and proteins are released by the mucilaginous cell colonies,” the authors write, giving rise to “copious amounts of viscous foams and mucus in the water column.”

When the algal proteins or carbohydrates get close to shore, the waves “act like a big blender,” explains Raphael Kudela, a marine ecologist at the University of California, Santa Cruz. “Physical agitation breaks them up and lets them reform,” as foam; the foam is then swept ashore, where it accumulates.

So the foam at Rockaway Beach may or may not have been “natural”–there was, after all, the funky odor I noticed after diving into the waves–but in any case it’s clear that significant sea foam onslaughts–like the one that blanketed a small Scottish fishing village at the end of September–can happen naturally. 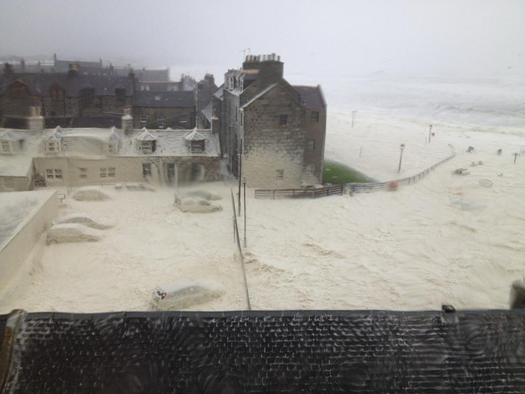 A small village in Aberdeen, Scotland was swamped in sea foam after a storm in September.

In any amount, natural sea foam is usually harmless–but, as marine biologists in California discovered a few years ago–not always.

In the fall of 2007, Dave Jessup, a biologist at the California Department of Fish and Game, began investigating a mysterious affliction that left hundreds of marine birds dead or stranded near Monterey. The birds’ breast and tail feathers were marked by a ring of yellow-green slime that smelled like linseed oil, and were all severely malnourished. Thinking that the birds might have been victims of an oil spill (oil de-waterproofs birds’ feathers, exposing them to cold, requiring the animals to burn their excess energy for warmth), investigators sent a sample of the slime to the state lab for analysis, but the tests came back negative: the slime wasn’t a petroleum product.

Jessup began investigating another possible cause: the so-called “red tide,” an annual algal bloom that gives the water off the coast a reddish-brown hue. The bloom was unusually large that year, and Jessup had come across cases of toxic algae before, so he contacted Raphael Kudela of UC Santa Cruz for help investigating a potential connection.

Kudela and his collaborators told Jessup that, as far as they knew, the organism causing the red tide bloom, Akashiwo sanguinea, didn’t have any harmful effects on life, but they also provided him with satellite images of the bloom so that he could track its location and intensity. When he compared the movement of the bloom to the timing and location of recorded bird strandings, Jessup found a perfect match. He even used the most recent satellite images to predict where the next bird stranding would occur, and his prediction was dead-on.

Since the algae itself was nontoxic, it couldn’t be the direct cause of the birds’ affliction, so Jessup turned his attention to the only logical suspect left–the massive piles of foam that kept appearing on the beach near the red tide. At some point, it occurred to him to dip a clean feather in a mixture of foam and saltwater. “With a normal feather,” Kudela explains, “you just shake it out and it’s dry.” When he removed it from the mixture, however, Jessup’s feather did not shake dry–it was soaked. 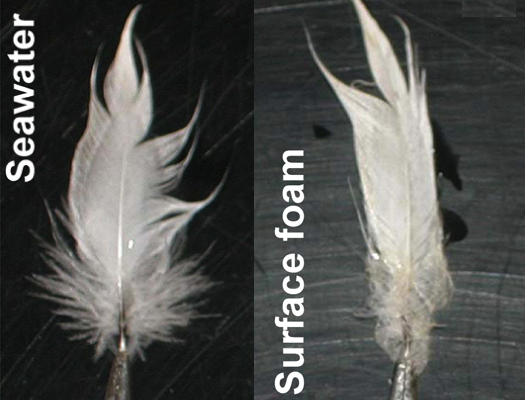 How To De-Waterproof A Feather

Kudela remembers getting a message from Jessup saying, “It’s the foam.” From there, the puzzle came quickly together–Kudela’s lab analyzed the structure and chemical composition of the foam to identify which surfactant it contained, then replicated the material using a protein from Akashiwo sanguinea, the red tide organism. The slimy yellow-green ring they had found on the birds contained the same stuff–the birds had waded through the foam on the water, and when they did, those surfactant molecules had stuck, hydrophobic end first, to their feathers, while the hydrophilic end pulled water molecules close to the animals’ skin, effectively de-waterproofing them. The birds were dying of hypothermia, but it wasn’t because of an oil spill; it was the foam.