In three possible ocean locations, the planet's crust may be thin enough for a drill to penetrate all the way through. 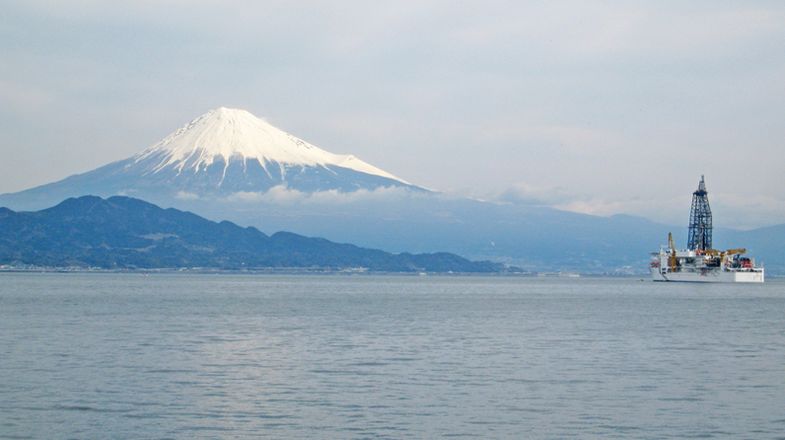 With enough money and enough moxie, scientists operating gigantic ocean-based drills could penetrate into the Earth’s mantle by the early 2020s, returning samples that could hold clues to our planet’s origins. The effort to reach into the heart of the Earth would be one of the most dramatic undertakings in science.

Drilling through the Earth’s comparatively thin crust to reach its innards would require getting through at least 3.7 miles of seafloor, which requires safely mooring a huge ship above the deepest parts of the Pacific Ocean. The hole would be just 30 centimeters (about a foot) in diameter. The effort could take at least $1 billion, which hasn’t been raised yet.

The good news is that the would-be mantle explorer, the Japanese research vessel Chikyu, has already set new world records for the deepest-ever scientific hole in the world. The ship’s drill reached 2.2 kilometers into the seafloor this summer, on a mission that just wrapped up over the weekend (the ship has not returned to port yet due to stormy weather). The Chikyu is capable of reaching much farther down. Still, drill technology needs to improve before anyone can reach the molten interior of our planet — Chikyu’s drill bits only last about 50 or 60 hours before they need to be replaced, CNN points out.

Damon Teagle, a geologist at the University of Southampton in the UK, tells CNN it would be a massive undertaking: “It will be the equivalent of dangling a steel string the width of a human hair in the deep end of a swimming pool and inserting it into a thimble 1/10 mm wide,” he said.

The deepest hole in the Earth is more than 12,376 meters (40,604 feet) into the crust, a borehole in eastern Russia drilled by Exxon Mobil in August. This one still doesn’t approach the mantle, and is not directly vertical, but the borehole and others show the idea of drilling into the liquid Earth might be feasible.