The quest to understand, explore, and protect the amazing animals 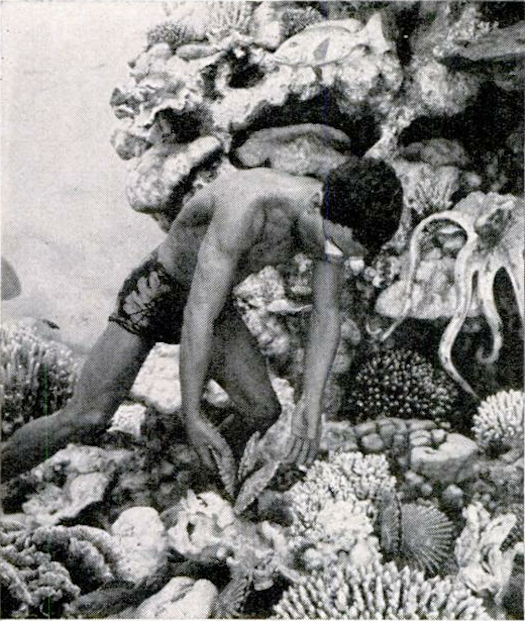 It’s no surprise that Popular Science has long been obsessed with coral–it houses up to one-third of all sea life and researchers use its fluorescent green and orange proteins in biomedical research. During the past 100 years, PopSci reporters have covered coral reefs from Australia to the American Museum of Natural History. We’ve written about how coral can help divers find oil fields and how to collect it–you know, for kicks–using submarines. Back in the day, coral was more of a given, a novelty.

Coral bleaching, first reported in PopSci in 1995, changed attitudes to one of worry. As climate change warms the oceans, the single-celled dinoflagellates that live in the coral leave it behind, taking with them the sugars they photosynthesize and cutting off the corals’ food supply. But there’s hope – as we reported last year, a bacteria found in the Red Sea appears to prevent coral bleaching in some coral. 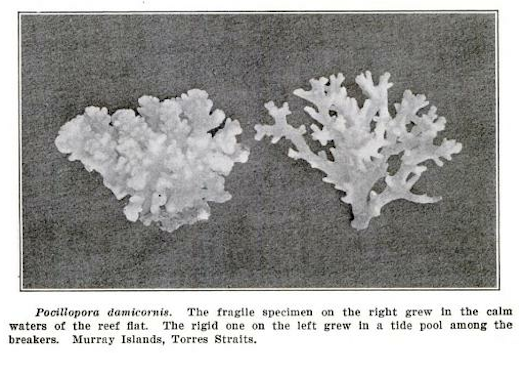 Popular Science geeked out over coral in 1914, running a 22-page (!) cover story about reefs in Australia. Our writer had trouble finding pristine coral colonies at first, writing, “Our surprise and disappointment was great therefore when we found the coral reefs to be overwhelmed with a layer of mud above which only the largest corals could raise their heads and thrive.” One wonders if he would have taken his travel budget money to the nearest bar to drown his sorrows if a local hadn’t “kindly told us of the clear blue ocean water and rich coral reefs surrounding the Murray Islands.” With the day and his story saved, the reporter dives into a coral state of mind, writing about how it protects the island from the ocean’s waves and telling readers he saw about 3,600,000 coral heads along Maer Island’s “natural aquarium.” Read the full story in An Expedition to the Coral Reefs of Torres Straits. 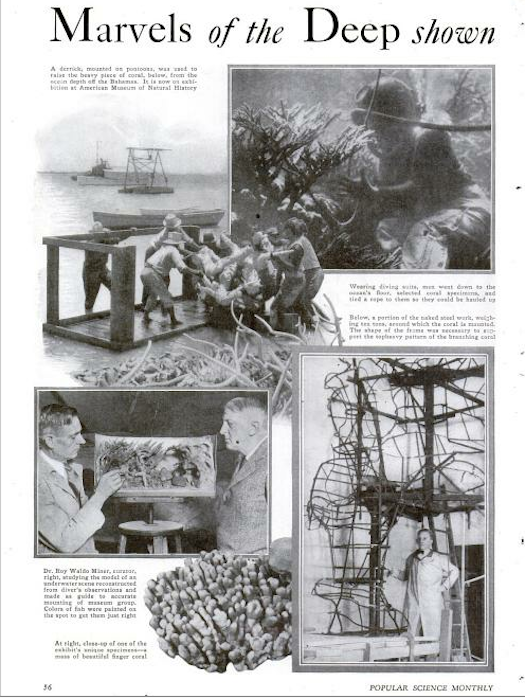 Divers used coils of rope to lasso coral in the Bahamas and haul it to the water’s surface for a 1932 exhibit at the American Museum of Natural History. The $100,000 show took 10-years to coalesce and had painted panoramas, models and, of course, real coral, including a two-ton mass of brain coral. Read the full story in Marvels of the Deep Shown in Amazing Museum Exhibit. Coral exhibits did so well that PopSci covered another American Museum of Natural History show nine years later. This time, the museum featured a reef from the South Pacific island of Tongareva, complete with a 900-pound Acropore coral. Museum divers hitched a ride aboard the yacht of San Francisco explorer Templeton Crocker. The word “endangered” didn’t yet go hand-in-hand with coral, so the team collected 10 tons of coral to reproduce the underwater enclave for the museum’s exhibit. The article boasts that curators even included a “grisly octopus” the group encountered on Tongareva. Read the full story in Lifelike Underwater Exhibit Shows 900-Pound Coral. 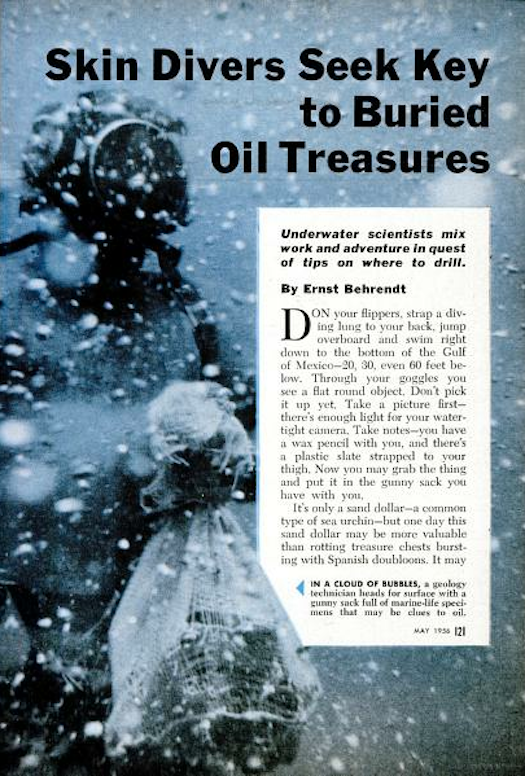 Oil companies trained divers to hunt for coral, according to our 1956 article about skin divers from Shell and Socony-Mobil who sailed on shrimp boats near Texas and California to search for oil fields. But, “Don’t worry,” we promised, “they will leave the game fish for you to shoot or spear. Instead they will stir up mud, scoop up sand, shells and starfish, break off chunks of coral, and attack stubborn specimens with a geologist’s pick and a suburbanite’s dandelion digger.” Some oil fields formed in ancient coral reefs and sand bars. By studying modern coral, researchers hoped to learn about ancient environments — basically where coral might have grown — leading them to potential oil fields. Read the full story in Skin Divers Seek Key to Buried Oil Treasure. PopSci fell in love with the Bertram, a boat that placed first not only at the Miami- Nassau race but also the Boat Race in the English Channel. With safe turns at high speeds, good control at low speeds and no nose-diving, we couldn’t say enough about it… even when it hit a coral reef at 50 mph. “The reef was solid staghorn and brain coral and lay about six inches below the surface of the water. The boat hit the coral and crashed along for about 200 yards before the coral ground us to a stop. No one was hurt. We managed to push the boat back across the coral to deep water and, believe it or not, we still floated and even had enough power and propeller to limp to a nearby port.” In all, PopSci reported the coral crash proved the ruggedness of fiberglass, the new outdrives and coral reefs. Read the full story in Jim Roe Tests the Bertram. 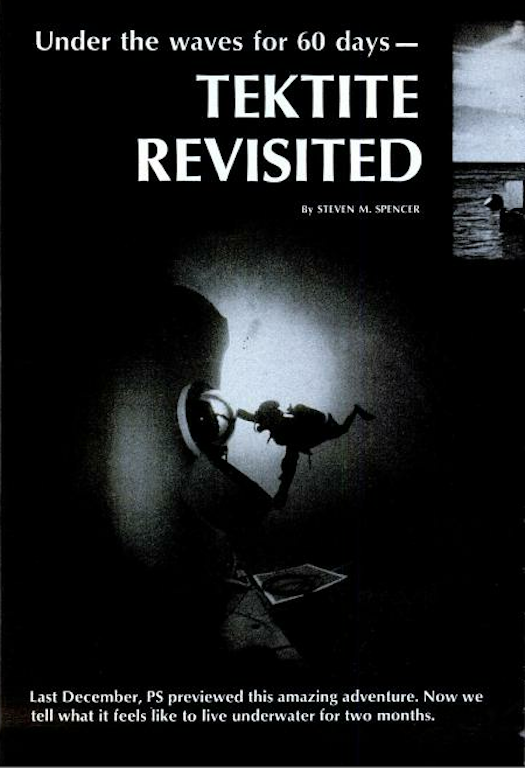 The same year astronauts landed on the moon, four young aquanauts went on a different type of extraordinary journey: the bottom of the ocean. From February 15 to April 15 1969, they lived in an underwater swelling near St. John in the Virgin Islands National Park. The Tektite I project, sponsored by the U.S. Navy, Department of the Interior, NASA and General Electric, wasn’t so unlike our July story about NASA’s Extreme Environment Mission Operations, or NEEMO. While underwater, aquanauts studied coral reefs, “known producers and reservoirs of petroleum,” we wrote, which could “provide clues in the search for petroleum and minerals.” Read the full story in Under the waves for 60 days — Tektite Revisited. 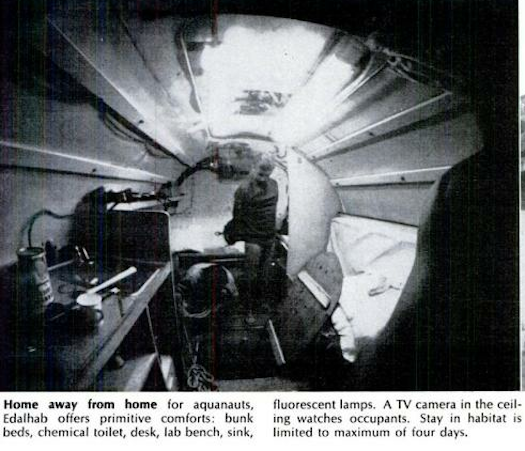 Popular Science sent a reporter to Edalhab, an underwater NASA and NOAA facility off of Florida, where he learned it’s hard to whistle when the air pressure is doubled at 35 psi. Aquanauts studied ocean ecosystems, including coral, bacteria, algae, sand worms and tiny fish. Our reporter dove with the aquanauts, noting that when he first saw a coral reef, no life was apparent. But, on closer inspection, “tiny creatures wriggle up through holes. Feather-duster worms, for instance — multi-hued bouquets that vanish when touched. They add the final dab of color to the underwater rock garden of sea fans, sponges, sea whips. Later I would find a myriad of cuts on my hands and legs from having touched and scraped things I shouldn’t have.” Read the full story in Underwater Habitat: Home is Where You Hang Your Fins. 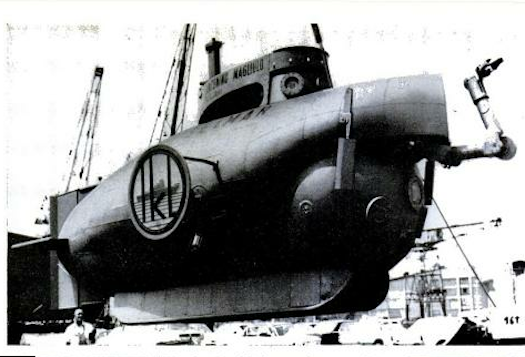 Here’s a not-so-rhetorical question PopSci asked readers in 1973: what’s the best way to gather coral? The answer: A German-built submersible with a long-reach hydraulic gripping arm built just for the job. It held three crewmembers for up to 48 hours and could dive up to 1,000 feet underwater. But PopSci didn’t advise readers use it as a getaway vehicle; it only puttered along at 3 mph. Read the full story in Coral Picker. 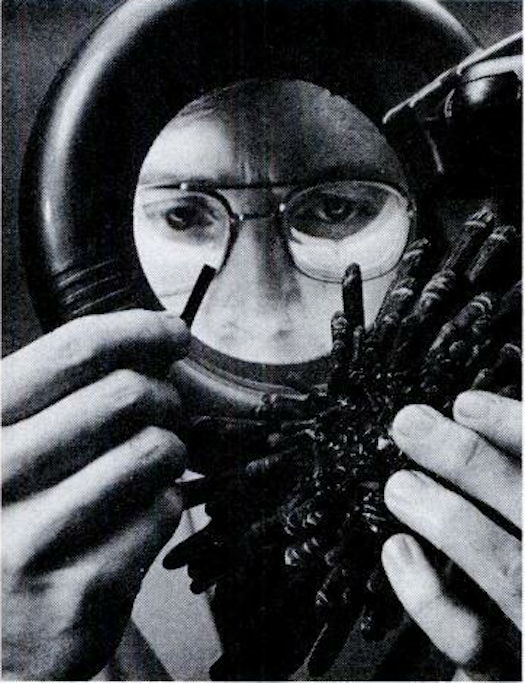 Leave it to Californian researchers to make blood vessels from coral and sea urchins. Technicians at the UCLA School of Medicine and Harbor/UCLA Medical Center injected a rubber compound into porous sections of coral and sea urchins, we reported in 1979. Once the rubber hardened in the sea creatures’ pores, the technicians chemically dissolved both the coral and the urchins, leaving a microporous tube of polyurethane rubber that they hoped one day would replace small blood vessels. Obviously, they never heard of the 3-D printer PopSci reported about last year that creates artificial blood vessels without needing to chemically dissolve coral. Read the full story in Sea urchins and blood vessels. 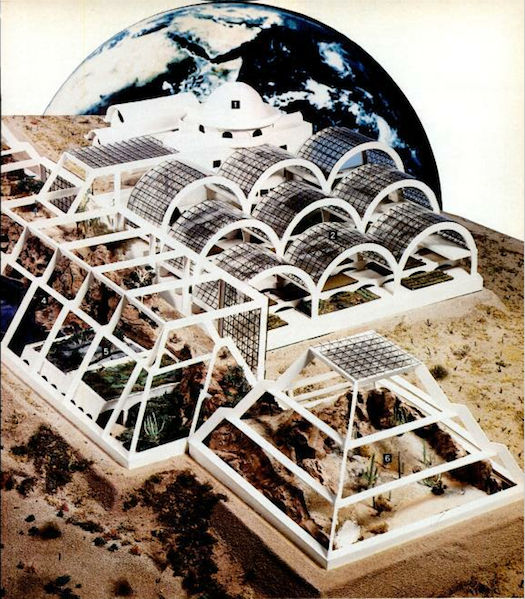 Biosphere 2 in Arizona still has coral reefs, just as it did when we wrote about it in 1986. Maintained by mechanical wave action, it’s probably best the coral don’t know they live in arid Arizona instead of in the tropical waters of the South Pacific or Australia. So long as the water doesn’t heat up, these biosphere coral should be safe from the dangers of climate change and coral bleaching. Read the full story in Biosphere.
Conservation
Ocean