How Scientists Turn The Ocean Into A Controlled Laboratory

Manipulating the acidity where a reef lives gives us a window into the effects of climate change. 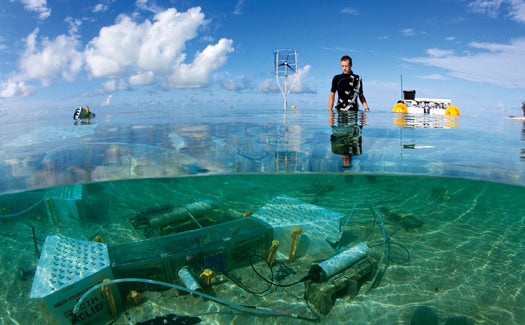 When marine biologist David Kline, of Australia’s University of Queensland, set out for Heron Island in the Great Barrier Reef, he and his team were determined to help answer a pressing question: How will rising acidity from climate change affect coral reefs? So they brought along their Coral Proto FOCE, the first device that lets scientists manipulate acidity in a reef’s natural environment. (The FOCE technology originated at the Monterey Bay Aquarium Research Institute in Moss Landing, California.)

The Coral Proto is a three-foot-long plastic box with sliding doors. After embedding it in a reef, researchers select a pH on a computer. A pump then squirts pre-acidified seawater from an onshore tank into the box. The Proto’s acidity sensors track levels to maintain the preferred pH. When it’s time to measure how the reef is faring, the researchers slide down the Proto’s doors to create a sealed chamber. They can then check the water inside for oxygen (a marker of photosynthesis) and alkalinity (a marker of coral growth).

Working two hours by ferry from the nearest city presented its share of challenges. When the bumpers that kept the computer afloat exploded from the sun’s heat, “we wound up trading someone a bunch of beers for some hard plastic floats,” says Kent Headley, a team engineer. Fish and sea cucumbers were regular visitors to the site, but so were venomous blue-ringed octopuses and cone snails. In the end, the researchers managed to pull off a weeklong proof of concept. Next, they’re making the Proto more portable and appropriate for deeper waters, where they can monitor other ecosystems, including kelp forests.