Armor Yourself In The Same Megatough Material As This Boxing Shrimp

Its tiny club could lead to big safety improvements 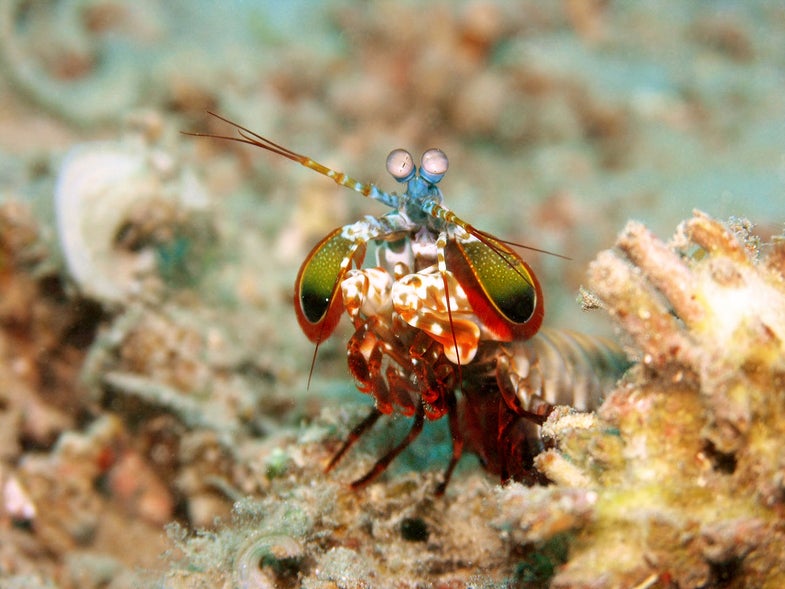 Under the paddle-like objects are the shrimp's clubs, which are thick and bludgeon-shaped. Jens Petersen, via Wikimedia Commons CC BY-SA 3.0
SHARE

Despite its segmented carapace, the mantis shrimp is known more for the punches it gives than the blows it takes. Related to the powerful pistol shrimp, the mantis is pound for pound one of the animal world’s deadliest pugilists. Researchers from the United States and Colombia have studied the mantis shrimp’s clubs, and found a new structure that might make for strong armor in the future.

Mantis shrimp use their clubs to generate deadly pulses of water that batter and break prey. These clubs strike fast, moving at 75 feet per second, and accelerating through the water over 10,000 Gs. It has to withstand generating those forces over and over again, or else the shrimp would be unable to hunt for prey. That means the mantis shrimp has evolved an incredibly durable club, making it tougher than the armor of the crabs and clams which it hunts and then bashes to pieces.

The club itself is made of chitin, the same material that makes up the exoskeletons of other arthropod bodies. In the mantis shrimp’s club, the fibers are arranged in a “helicoidal” formation, like a spiral staircase. This shape helps to disperse the force of the strike, keeping the overall club durable.

Funding for the study came in part from the Air Force Office of Scientific Research, and its conclusions could lead to the creation of newer, stronger armor designed to resist stress. From the paper: