Identify seafood and other objects as you trawl a virtual seafloor. End-of-summer blues have you thinking of your next beach vacation? Now you can virtually swim along the ocean floor and stare at the interesting starfish, scallops and other bottom-dwellers that lurk there. For science!

A new interactive website called Seafloor Explorer needs the public’s help to identify objects and seascapes in a few million underwater photos. The project is starting with 100,000 images, but there are more than 40 million in all. The photos come from the HabCam group, an underwater habitat-mapping project at the Woods Hole Oceanographic Institution.

It’s the newest addition to the Zooniverse, where citizen scientists already have the opportunity to hunt for new planets, categorize galaxies, organize whale calls, study climate through old shipping logs, and more.

To participate, head over to SeafloorExplorer.org and create a login. Then you’ll start seeing images, and a list of criteria you’ll have to mark. For instance: Is it sandy or gravelly, or are there shells or boulders? Then you can mark fish, draw circles around sea stars, and identify other creatures or features. As of this morning, volunteers had already marked 740 sea stars, 374 scallops and 42 fish. There’s a lot more to be found.

The imagery is from coastal regions in the Northeast, including Georges Bank, the Mid-Atlantic Bight, and the Stellwagen Bank National Marine Sanctuary, according to WHOI. HabCam is towed behind a ship and sails about six to eight feet above the seafloor, where it collects six to 10 images per second. The goal is to create high-resolution maps of animal habitats, including how animals are distributed relative to their predators. This can help with conservation efforts and basic science. Categorizing all of these images would take the team way too long, which is why they turned to the Zooniverse and its legions of volunteer citizen scientists.

“We have the right tools now to do automated classification of say, scallops and substrate. But what we need are training sets,” explains Amber York, a HabCam researcher. “We need images that humans have identified and have said ‘Yes, that’s a scallop right there'” — and then these can be used to train the object-classifying software.

The Zooniverse has already had about 700,000 volunteers contribute to data analysis, according to WHOI. That number increases by about 5,000 each week. Now ocean lovers can join the ranks! 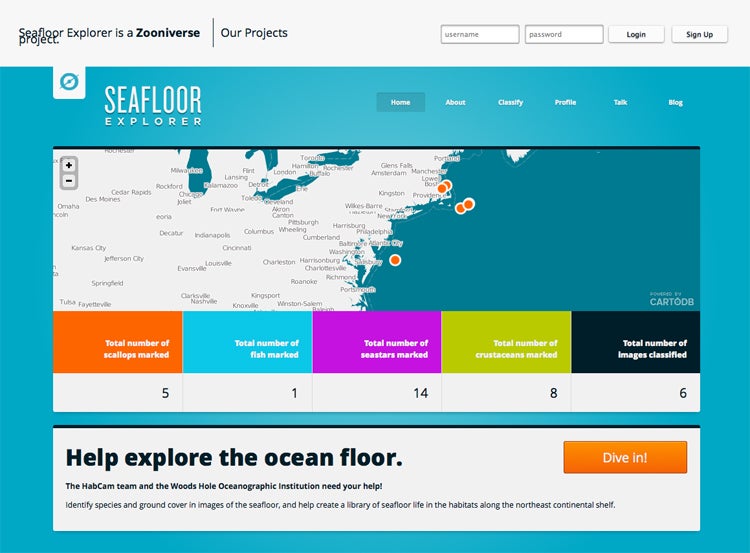